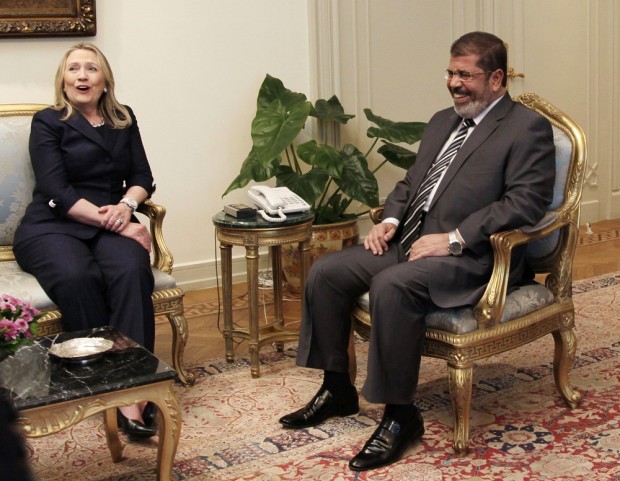 Egyptians have been walking the road to hell over the past few weeks, characterized by a frightening polarization between Islamists and non-Islamists and a harsh battle of wills between the president and the judiciary.

President Mohamed Morsy’s desire to move the political transition forward in order to tackle economic and other challenges is understandable, but insisting on pressing forward with a constitutional referendum in the face of such strong opposition to the draft invites ongoing unrest and a serious political rift that will take months, perhaps years, to heal. After all, this is the constitution, not a mere law or even an election.

Meanwhile, what has been the role of the US, the most important political and military ally of Egypt?

After initial pro forma calls for “restraint,” the US administration apparently began to realize the seriousness of the situation as protests grew in early December. President Barack Obama telephoned Morsy on 6 December to express “deep concern” about the spiraling violence and to advocate government-opposition dialogue about a “transition to a democracy that respects the rights of all Egyptians.” Secretary of State Hillary Clinton called on 5 December for “a constitutional process that is open, transparent and fair, and does not unduly favor one group over any other.”

Several of Morsy’s advisers were in Washington at the time on a previously scheduled trip to discuss a possible presidential visit — now postponed — and presumably heard a sharper version of the same message in private.

But did the words of US officials, however well-intentioned, have any impact in Egypt? The US is having little effect these days for a variety of reasons, some having to do with the chaotic situation in Egypt, but others with shortcomings in US policy.

To begin, however, it is important to clear up one misconception: There never was a US plan to put the Muslim Brotherhood into power in Egypt or elsewhere. The idea that the US would choose to sponsor a power grab by a movement with which Washington had virtually no relationship until a year ago, and whose ideology is at considerable odds with that of the US, is laughable.

The other version of this conspiracy — that the US naively pushed for democracy in Egypt, imagining that liberals would come to power — is equally false.

What observers often do not understand is that US foreign policy, regardless of who occupies the White House, is almost always reactive rather than proactive.

The US rarely sets out to bring about profound change in another country (Iraq being the major exception), and certainly did not do so in Egypt. Thus Washington never decided to jettison former President Hosni Mubarak, but simply assessed that there was no possibility of buttressing his rule in the face of a large popular uprising, coupled with military dissatisfaction with his succession plans.

So the US moved awkwardly but quickly to put itself on the side of the revolution and has since cultivated relations with those in power, first the Supreme Council of the Armed Forces and now Morsy.

There are also two foreign policy problems specific to the Barack Obama administration that diminish policy effectiveness: Words are often not matched by deeds, and defying the US does not bring any consequences.

This has been especially evident in relation to Syria and Palestine, but also Egypt, where the US has failed to match rhetorical support for the revolution with meaningful help.

The Obama administration could and should have galvanized economic help and investment from countries all over the world and international financial institutions in early 2011 to encourage and reward a true democratic transition and sound economic policies. If the US had undertaken such a process, it would now enjoy a greater degree of influence and credibility in Egypt and would have created strong incentives for the sort of transition to democracy and prosperity that most Egyptians want.

The failure to put much new help on the table also means the Obama administration now has little to take off — thereby imposing consequences — in case the democratic transition really derails. A planned package of US$450 million in economic assistance had already been put on hold due to reservations in the US Congress about Morsy’s government, and the US is unlikely to withhold the $1.3 billion in military assistance unless the military steps in and retakes political power.

President Obama announced in May 2011 that “it will be the policy of the United States to promote reform across the region, and to support transitions to democracy,” and that this would be “a top priority that must be translated into concrete actions.” He reiterated the desire for Egypt to exert “responsible regional leadership,” but accorded just as high a priority to free and fair elections, a vibrant civil society, and accountable and effective democratic institutions.

The current political crisis in Egypt is a defining moment, one of perhaps many such moments on the long and rocky road toward an open and just political, legal and economic order. If the US wants to help Egypt eventually reach that goal, it will need to develop much more robust and sustainable forms of engagement in order to see the change through. Egypt is well worth it.

This article was first published in Egypt Independent