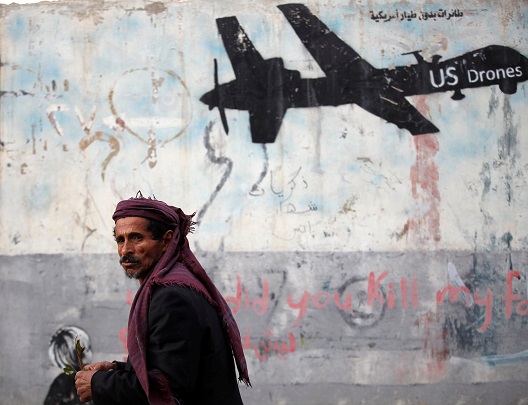 The United States has launched more than 40 air strikes since March 3 on suspected al-Qaeda sites in Yemen, more air strikes than all of 2016. The Trump administration hopes to boast of progress in stopping the advance of al-Qaeda in the Arabian Peninsula (AQAP), which has seen significant gains since the outbreak of Yemen’s war nearly two years ago. Doing so could bolster the administration’s emphasis on stopping “radical Islam.”

But viewing those strikes as separate from the ongoing war, as rhetoric from the White House clearly implies, fundamentally misunderstands the country’s sprawling conflict and misreads the reasons behind AQAP gains that directly stem from a war that the United States is supporting.

The escalation of US operations in Yemen was not limited to that recent flurry of strikes. President Trump approved three drone strikes in Yemen in the first days of his administration, killing ten suspected AQAP members and at least several women and children. A week later he green-lighted the first major ground operation of his presidency, a Navy SEAL-led raid aimed to gain intelligence on the group. In that January 29 raid, US Special Forces attacked an AQAP stronghold, killing 14 militants and as many as 30 civilians, including women and children. President Trump declared the raid a success even as other government officials called that characterization into question—particularly given the death of US SEAL team member William “Ryan” Owens. US officials reported that the raid did not produce “actionable intelligence.” Trump then switched courses and distanced himself from the raid—and the criticism it was receiving—by stating that US military officers pushed the operation, planned before he took office. At the same time, AQAP and the Islamic State in Yemen received a boon with the January 27 executive order travel ban that excluded Yemenis (and members of six other Muslim-majority countries) from travel to the United States.

The war in Yemen, now approaching its second anniversary, is rooted in domestic conflict over the shape and scope of the political transition following the forced resignation of President Ali Abdullah Saleh as a result of Yemen’s 2011 uprising. Foreign actors have been deeply involved. The Gulf Cooperation Council intervened directly in the uprising through its initiative that negotiated Saleh’s exit without dismantling his oppressive regime. That plan also called for the elevation of Vice President Abdrabbo Mansour Hadi to the presidency, a move that was put to Yemenis in February 2012 for an up-or-down vote.

The Houthis allied with former President Ali Abdullah Saleh in September 2014 with their occupation of the capital, Sanaa. Since late March 2015, Saudi Arabia’s multinational alliance has been fighting to reinstall Hadi as the leader of a united Yemen (despite that his initial two-year term, which expired in early 2014, was extended only for one year). Against this backdrop of Yemen’s disintegration, AQAP found fertile opportunities for growth, first in the country’s minimally governed periphery and now moving closer to major population centers. It even governed directly in the port city of Mukallah for several months before being driven out in August 2016, and it continues to control pockets of neighborhoods in Aden as well as numerous locations in the south and east.

For reasons related more to the US-Saudi relationship than to American national security, the United States provides direct aid to the coalition of Saudi-led forces waging war on Hadi’s behalf, including material, intelligence, and the mid-air refueling of Saudi jets on bombing missions. The extent of engagement has already made the United States a de facto, if not quite de jure combatant in this war. This position intensified recently when the United States sent the USS Cole destroyer to patrol the Red Sea coast after ballistic missiles were fired from Houthi-controlled areas targeting a Saudi frigate in the Red Sea.

Saudi Arabia insists that the core dynamic of the Yemeni war is the regional struggle between Iranian and Saudi Arabia influence. Iran vocally supports the Houthis, but evidence of Iranian material support is dramatically overstated. Yet it was the war itself—and the Saudi-advanced narrative—that produced sectarian tensions that had not previously existed. This sectarian rhetoric plays directly into the hands of AQAP and the Islamic State offshoot now established in Yemen, both of which advance that same sectarian rhetoric about the need to stop Shia aggression against Sunnis. Fighters aligned with the Islamist Islah party and the Houthis themselves have now also adopted the poisonous sectarian rhetoric.

But Iran’s support for the Houthis—whatever its extent—has not translated to direct command-and-control from Tehran. Furthermore, Iranian support for the Houthis is qualitatively different from direct Saudi military involvement in the civil war. There is a deep asymmetry in the internationalization of the conflict and US involvement in aiding the Saudi coalition and in targeting AQAP directly only makes that asymmetry more pronounced.

With all this going on, the United States has upgraded its periodic drone strikes inside of Yemen in targeting Al-Qaeda with the recent escalation in air raids and Special Forces missions. Trump may be so intent on “winning” wars that he seems to believe that the US military has not yet tried to win. Yet analysts well-versed in the politics of Yemen and AQAP consistently argue that the war itself fuels AQAP’s growth.

Trump and some in his administration have aggressively advocated for the destruction of radical Islam and apparently see Yemen as a terrain on which that victory might unfold. Through the lens of a civilizational clash, he imagines that the United States can use its advance warfare technology to pick off AQAP leaders and thus weaken and eventually defeat the organization. This approach largely assumes that it can do so as a separate project from aiding Saudi Arabia in its efforts to restore Hadi to power.

But the drone strikes and ground raids are unlikely to weaken an expanding AQAP, particularly as the narrative that resonates with Yemenis is one that accuses the United States of supporting the destruction of the country. The United Nations Security Council-appointed Council of Experts on Yemen recently submitted its final report, prepared in accordance with UNSC Resolution 2266 (2016). The report states emphatically what Yemen observers have been arguing for more than a year, namely, that a military victory of one side over the other is not “a realistic possibility.” Nonetheless, the United States continues to assist the Saudi-led alliance as if such a possibility were realistic.

AQAP will continue to flourish in the spaces created by the war. They may even continue to fight on the same side as Saudi Arabia against the Houthi-Saleh alliance, as they did in Hadramawt. The Trump administration, like the Obama administration before it, seems to want it both ways: to defeat the Houthis (even though that war is expanding AQAP’s base), and to defeat AQAP. The big mistake is to imagine that the latter is a distinct conflict from—and can be accomplished with no reference to—the ongoing war.