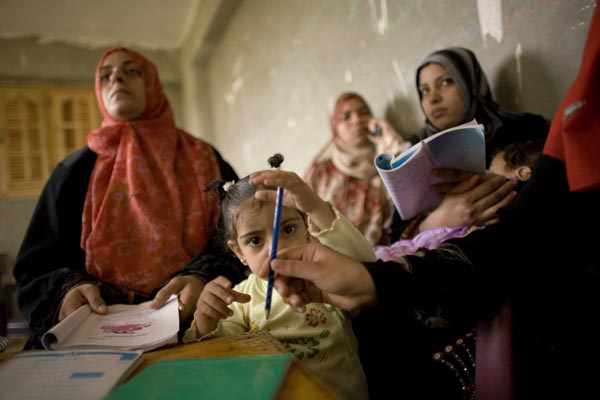 Since the end of the unforgettable 18-day stand-off in Tahrir square, the majority of Egyptians have viewed the revolution decapitating a corrupt regime whose leader and immediate inner circle spoiled the political system by prioritizing their own individual interests over those of the Egyptian people. But this overly simplistic understanding of the former regime fails to acknowledge the deep-rooted corruption that penetrated all levels of the state, not just its leaders. The corrupt and self-serving nature of state institutions trickled down into the everyday lives of Egyptians by compromising the quality and integrity of vital public services, foremost among them education. The systemic nature of these problems, which extended far beyond the head of stead and his deputies, ensured that the corruption and degradation of the educational system would survive long after the regime’s demise.

Over the last few decades, the Egyptian educational system has been progressively degraded, reflected in its institutions, quality, and the attention given to it. The government allocates a paltry 3.5% of GDP to education, one of the lowest rates in the MENA region. The negative consequences of inadequate spending on education are numerous: the illiteracy rate has reached 25% (where one in every four Egyptians cannot read, according to figures from UNESCO Egypt); a growing number of children are receiving informal education outside public schools; and youth who do manage to get an education find that they have spent more than 17 years in various educational levels only to emerge unqualified for the domestic and global labor markets  due to a lack of practical and vocational skills. In addition to the impact on the economy, Egypt’s deteriorating educational system has negatively affected the overall consciousness of Egyptians, limiting their ability to observe, analyze, make informed decisions in the political, social and economic realms to which they are entitled to participate as citizens. A lack of education denies citizens the intellectual tools needed for the critical thinking that is needed to form opinions and take advantage of their unprecedented freedom to make political decisions in the new Egyptian democracy.

Egypt is currently going through a truly critical phase in its history. For the first time in its existence, the country is democratically and freely voting for its next president, who will go down in history as Egypt’s first post-revolutionary president. The world is watching in admiration as Egypt takes a pivotal step toward become a fully functioning democracy without barriers to political participation or restrictions on universal rights and freedoms.
The stakes of the presidential election could not be higher, but many analysts have failed to recognize one of the most significant factors determining voters’ decisions: their educational level. Education, or lack thereof, is a key player in the elections game, where the all-important decision of choosing Egypt’s next president lies in the hands of citizens who have been deprived of education – whether they are completely illiterate, or lack the ability to analyze their options and make informed political decisions. Egypt has a long traditional of electoral politics, and there has always been a false assumption that the level of political consciousness among citizens is not related to how well-educated they are, but this myth needs to be debunked.
Voter illiteracy was just as big of a problem when the parliamentary election took place last November as it is now, only then it was commonly assumed that Egyptians’ political awareness had skyrocketed after the revolution, and would prevent any party or group from manipulating voters’ ignorance to win their votes. When asked about the voting patterns in rural Upper Egyptian governorates and villages, where access to quality education is very limited compared to more urban and developed areas, Egyptian writer and novelist Sahar al-Mogey told me “I’ve witnessed people in these areas, they do have the ability to critically think and analyze despite not being well-educated. They say they used to vote for Muslim Brotherhood candidates in previous parliamentary elections only to balance the now dissolved National Democratic Party candidates, and now they invest a lot of thinking in choosing who to represent them.” However, when asked again a few weeks before the coming presidential election, and after observing the election of a Brotherhood-dominated Parliament that – in the eyes of many Egyptians – may have been fairly elected but does not accurately represent the diverse makeup of Egyptian society, Sahar was less optimistic. She said that Egyptians had unwittingly been manipulated by campaign tactics, and called for NGOs and civil society to help combat such games by reaching out to the uneducated and giving them the knowledge needed to elect politicians who represent their interests, instead of those who take advantage of illiterate and uneducated citizens using superficial slogans or by offering services or gifts in exchange for votes.
Education is what provides Egyptians of all classes and backgrounds the opportunity to reach their full potential and serve their country whether by voting or by contributing with their thoughts, work, creativity and innovation. Without a strong educational system, the goal of achieving a civil, economic, and political renaissance will remain out of reach. Most concerning, the problem is not just the educational status quo and how it may distort the results of the presidential race, but also, the lack of certainty regarding the next president’s educational policies, which cannot be discerned from the grand promises contained in their campaign platforms. Will the next president prioritize educational reforms, or will he maintain the status quo, avoiding the scrutiny and pressure that would come with 80 million educated individuals monitoring him, thinking with him, and replacing him with another if they so choose?
Shaimaa El Nazer is an Egyptian Media and Marketing Specialist; Shaimaa holds a bachelor degree in Political Sciences from Cairo University and works closely with social businesses and initiatives of social entrepreneurs in different Arab countries
Photo Credit: Laura Boushnak