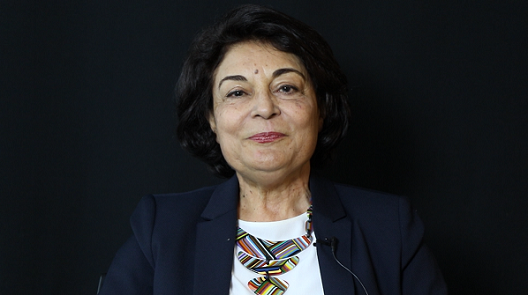 Iraqis will go to the polls for the first time in four years on May 12. The vote will determine Iraq’s next prime minister at a critical time for the country as it emerges from a three-year war with the Islamic State (ISIS).

Will the significant shifts in electoral lists bring about change for the country? Four experts share their views.


Ambassador Rend al-Rahim, Former Iraqi Ambassador to the US and co-founder/president of the Iraq Foundation.

I think that these elections are going to be somewhat more heated than previous elections in 2014 and 2010 because the electoral landscape and the landscape of the coalitions that are contesting the elections is a bit more complex and different from what it was in the past. And judging by what’s going on in Baghdad and all the campaigning that’s going on and the ferocity of the campaigning, obviously the candidates also feel that these are more heated and more contested elections.

The remarkable thing is the fragmentation of a number of the larger blocs that existed in 2014 and 2010. We do see a splintering which is going to actually make it much more difficult to form a super coalition after the elections that is entitled to nominate a candidate for prime minister. In the past, the Shia bloc was large enough coming out of the elections to need some help from the Kurds and the Sunnis. If, as we anticipate now, there won’t be a single Shia bloc which has a big lead in terms of the seats it acquires in the elections and we have more or less equal seats for all the Shia groups, then the competition among the Shia to acquire alliances with Sunnis and Kurds in order to create this super majority is going to be much more difficult, much more fraught, and there is going to be some very hard bargaining.

Any candidate that is put forward for the premiership is going to be somewhat constrained by the bloc and by the parties that nominate him because it will be a weaker premiership. It will not be a premiership that is backed by a single, very large bloc of seats, but sort of a divided bloc of seats, and the bargaining will result in restrictions and conditions on the new prime minister. So, it’s going to be very difficult to tell.

There’s also, of course, the issue of the Iranian influence in who the candidates are. That is something that has always existed and will exist again. We don’t know how that is going to play out and it’s going to be interesting to watch once the elections are over.

This election is important, not because it will bring about radical shifts in Iraqi politics, it’s most likely going to be some sort of continuity of what we have seen in previous elections, but asserting the electoral process as the tool through which power is circulated and leaders are chosen, which, in a way, goes against the current trajectory in the Middle East where there is a return towards a new authoritarianism.

The other factor that is important about this election is that it might enhance and reinforce the trajectory that began in the last few months, which is the trajectory towards what I call post-sectarian politics in Iraq. Of course, it also has the potential of reversing this direction, it all depends on the outcome and the alliances and arrangements that will emerge after the election.

In general, we see a fragmentation in the sectarian and ethnic blocs. There are parties that are competing among each other in the same sectarian/ethnic constituency, and there are some nascent trends towards forming across sectarian alliances, such as the one of the prime minister, Haider Abadi’s coalition which runs in all Iraqi provinces, and Muqtada Sadr’s coalition which is a coalition of Islamists, liberals, communists, Sunnis and Shias.

There are some indicators that there are new dynamics that this election might reinforce and help to develop further if the groups or coalitions that are inclined towards post-sectarian politics will manage to achieve good results during the election.

Amb. Samir Sumaidaie, Former Iraqi Ambassador to the US

The forthcoming election in Iraq is advertised to be a turning point in the political process; I don’t think it will be. There will be some changes and some adjustments and realignments, but in my view, it’s not going to produce a fundamental change in the structure of politics in Iraq. The chances of that happening are so remote because the dice has been loaded against change, against fundamental change, and in the interest of preserving the status quo.

There are three main institutions that are very important and relevant and necessary for change. One is the law on political parties, second is the way media is governed, the national commission for media, and the third is the commission for running elections, the authority to organize the elections themselves. All three, which are supposed to be totally independent, have been co-opted to preserve the status quo.

At the moment, Islamist parties run the show and they have established themselves in a position of power, and they have manipulated the system in their favor. So, I think although there’s great resentment, there’s great dissatisfaction, the instruments for change are not in place and therefore I don’t believe there will be any significant change apart from some alliances shifting here and there.

I am former ambassador to Iraq, I also served in Iraq under the Saddam Hussein years—1978 to 1980—and that gives me a frame of reference that has been amazingly valuable. I know what really bad looks like, and really bad looks like that two-year period when Saddam formerly assumed power. It was, as Kenan Makiya wrote, very much a republic of fear.

As we now move into the Iraqi elections, what a different country it is today, with all of its problems, all of its troubles, all of its challenges, this is an Iraq I could not imagine at the height of the Saddam years. A number of elections have taken place, not just one, we’ve had provincial elections in which defeated incumbents cried foul, cried fraud, then cleaned out their desks and said they would do better in the next election cycle.

Whatever difficulties, whatever dangers lie ahead, I think the Iraqis fully understand the importance of democracy, that it is about more than elections, clearly, it’s about governance, where there are many challenges. But free and fair elections in an absence of violence goes a very, very long way to building the Iraq of the future.