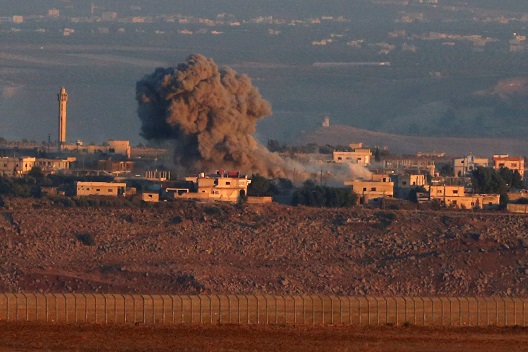 Photo: Smoke rises following an explosion at the Syrian side of the Israeli Syrian border as it is seen from the Israeli-occupied Golan Heights, Israel July 26, 2018. REUTERS/Ammar Awad

Tension continues to escalate along the Israeli-Syrian border with the recent regime southern offensive to oust opposition in the area and Israeli attacks on Iranian targets in Syria. Continued activity along the border is expected as Iran continues to solidify its hold on Syria. Yet Israeli’s strategy is less clear as Iran continues to test the boundaries pushing Israel to act in Syria; among other actors like the Islamic State. We asked our nonresident senior fellows former Ambassador Frederic C. Hof, and Mona Alami about Israeli’s current and potential involvement in the Syrian conflict as it develops.

What is the overall Israeli strategy in Syria and what is Russia’s role?

FH: In my view, reliance on Russian assurances will be non-productive. Yes, Russian President Vladimir Putin is well-disposed toward Israel and its Prime Minister. But he lacks the intent and the capability to remove Iran from Syria entirely or keep it permanently away from the Golan Heights. Putin wants Israel to signal its explicit acceptance of the continued rule of Bashar al-Assad, arguing that an Assad-led Syrian state supported by Russia is the best guarantee against a continued prominent Iranian role in Syria. But the ground combat power deployed by Iran in Syria is essential to Assad’s continued rule, given the broken state of the Syrian army. Putin knows this and, for Putin, keeping Assad in power is essential for Russian domestic political considerations. Putin can neither remove Iran from Syria nor, in the long-run, prevent Iran and Hezbollah from establishing a new “resistance front” along the eastern base of the Golan Heights. He seeks Israel’s endorsement of Assad, but is in no position to meet Israel’s needs vis-à-vis Iran.

MA: First, Israel wants to maintain direct military and diplomatic channels with Russia to contain Iran in Syria and avoid clashes in the Syrian skies between the air force of the two countries. The policy has paid off. Russia’s Syria negotiator Alexander Lavrentyev said in an interview on Wednesday that Moscow convinced the Iranian forces in Syria to withdraw to at least 85 kilometers from the Israeli border. Secondly, Israel is gathering significant intelligence on Iran presence in Syria. In May, Israel struck over seventy Iranian positions in Syria. The targets were intelligence installations, rocket depots, army bases, logistic warehouses used by Iran. Third, Israel embarked on a gradual military campaign, which reached its peak in May. Israel has struck Iranian targets in Syria over 150 times in the last few years.

How is the latest airstrike significant or different from before? Or isn’t it?

FH: As I understand it, the latest Israeli airstrike was directed at a Syrian regime facility now hosting Iran and Hezbollah. Israel had reason to believe that ground-to-ground missiles were being produced at a military complex north of Masyaf: a facility where sarin nerve agent was once produced by the regime. Both the reported methodology of the strike—using Lebanese airspace—and the target itself is consistent with prior practice. Moscow regards Israeli strikes of this nature as a cost of doing business; a way to increase its own credibility in the eyes of Israeli leaders by remaining passive so long as the targets are Iranian and not regime in nature. But Israel’s military and intelligence establishments probably understand (as well as Putin does) the strong ties of mutual dependence between Assad and Iran.

MA: Several strikes targeted Iranian interests in Syria in the last two months in Homs, Hama, and Aleppo. Aleppo was the furthest target hit by Israel and it shows that Russia will not impose red lines on Tel Aviv’s containment strategy of Iran in Syria neither geographically nor military.

Will Iran push its hand in Southern Syria to attack Israel? Could it?

FH: Tehran very much wants to shift the focus of its “resistance” to Israel from Lebanon to Syria. Keeping its essential arm in the Levant—Lebanon’s Hezbollah—free from Israeli attacks and keeping Hezbollah’s missile and rocket forces in Lebanon intact are essential Iranian objectives. For a corrupt regime in Tehran and for a Hezbollah adept in drug running, money laundering, human trafficking, and assassination; maintaining the pretense of resisting the “Zionist enemy” is essential. At the same time, however, neither Iran nor Hezbollah wishes to provoke an Israeli response on the order of 2006. Although they strongly desire to have a presence along the eastern base of the Golan Heights, they will be cautious in the level of harassment they try to inflict on Israel.

MA: On the other hand, Russia appears to have imposed red lines on Iran as the recent deal for Iran forces to withdraw to a distance of 85 kilometers from Israel’s borders in Syria show. In May, Israeli Prime Minister Benjamin Netanyahu convinced Russia not to supply the Syrian army with advanced S300 anti-aircraft systems. Israel had been opposing the deal for a long time, fearing the systems would limit Israeli air force freedom of action over the Syrian sky. Most of the recent Israel attacks have been coordinated in advance with Russia.

However, at the same time, Russia is aware that it still needs Iran in Syria which means that its margin to maneuver remains limited until now. On Monday, Russia’s ambassador to Israel Anatoly Viktorov told an Israeli channel that the Iranians were “playing a very, very important role in our common and joint efforts to eliminate terrorists in Syria adding that “the Iranian presence in Syria is fully legitimate according to the UN principles and the UN charter.” Iranian proxies whether local or foreign have played an important role in beefing up pro-regime forces operations.

In Deraa and despite Russian denegation, local pro-Iran militias such as Abu Fadl Abbas and foreign militias such as Hezbollah assisted the pro-regime forces in capturing the southern province. For now, Iran is prioritizing the reclaiming regime territory; namely in the north. Any confrontation with Israel appears to be thus postponed.

Could Israel become a bigger player in Syria due to Iran interference?

FH: Israel will probably resist increasing its military role in Syria, restricting itself to addressing Iranian and Hezbollah targets it deems dangerous to the security of Israel. It will also continue to resist involving itself in any regime-change activities. Indeed, Israel could adapt quite readily to the full restoration of Assad regime presence and power in Syria, provided Iran is marginalized: a profoundly unlikely outcome. Israel has been strongly tempted by Putin’s empty promises of marginalizing Iran in return for an Israeli embrace of Assad. It is a temptation to be resisted.

MA: Yes, it definitely could. Israel will continue striking Iran in Syria when it deems necessary. It remains to be seen what Tehran’s strategy will be after Assad consolidates his hold entirely over Syria, which will in turn define Tel Aviv’s retaliation. At the moment, Iran is under immense pressure with the US decision to pull out of the nuclear deal and impose new sanctions and deteriorating economic conditions with an increasingly weak local currency and strikes. How will that affect its foreign strategy in the region and more specifically in Syria? Will it ramp up its anti-Israeli and western narrative? It is unclear for the moment.