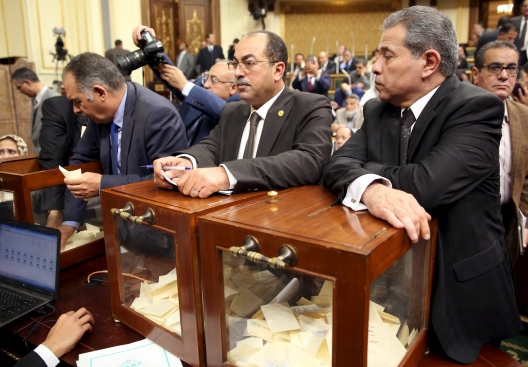 Egypt’s first legislature in more than three years held its inaugural session on Sunday, where it elected a constitutional expert as its speaker. The parliament is made up of 596 members of parliament (MP), divided into 448 independents, 120 party-based MPs, and 28 presidential appointees. During the chaotic session, which was broadcast live on national television, Members of Parliament elected the Speaker of the House, amid controversy over references to the January 25, 2011 revolution in the constitution.

Speaker of Parliament and Deputies

Ali Abdel Aal was elected speaker of the house with 401 out of 585 votes. Abdel Aal is a constitutional law professor at Ain Shams University. He was elected to parliament through the For the Love of Egypt Coalition, and is a member of the Coalition’s In Support of Egypt parliamentary bloc.

In 2013, he was appointed by former interim President Adly Mansour to a committee of ten legal experts tasked with amending Egypt’s constitution and a larger 50-member committee that reviewed the document. In 2015, he headed a committee responsible for drafting three electoral laws related to House of Representatives affairs, political rights, and the division of electoral constituencies.

MP Mahmoud al-Sharif was elected as one of the House of Representatives’ two deputies. He is also a member of the In Support of Egypt parliamentary bloc. Run-offs for the position of a second deputy are set to take place on Monday, between Wafd Party MP Soliman Wahdan and In Support of Egypt MP Alaa Abdel-Moneim.

The new parliament’s first task will be to ratify over 300 presidential decrees issued by President Abdel Fattah al-Sisi, who took office in June 2014, and Interim President Adly Mansour, who took office in July 2013. According to Article 156 of Egypt’s Constitution, the House of Representatives has 15 days from the start of its inaugural session to discuss and ratify the laws.

According to the Tahrir Institute for Middle East Policy’s legislation tracker, Sisi issued at least 263 laws and decrees since taking office. Of these, 49 relate to the economic and resources, 34 relate to political and social rights, 32 relate to military and security affairs, 32 relate to foreign policy, and 116 were appointments or administrative decisions.

According to parliamentary processes, presidential decrees are reviewed after first being discussed. Some have suggested that the laws be distributed among the parliament’s relevant committees in order to expedite the review process.  However, given the the number of laws to be discussed and parliament’s short time frame, many expect that parliament will sweepingly approve the laws and decrees.

Controversy erupted during parliament’s first session when MP and Chairman of the Zamalek Sporting Club Mortada Mansour altered the text of the constitutional oath. Instead of pledging to “respect the constitution,” as the oath reads, Mansour instead recited the oath as saying that he would respect “articles of the constitution.”

Mansour said that he changed the oath because he objected to praise for the January 25 revolution that is included in the constitution’s preface.

“The preamble of this constitution says that it reflects the principles of the January 25 revolution and the June 30 revolution, and I only believe in the second revolution,” Mansour said, referring to the protests that that led to the ouster of former President Mohamed Morsi. He had indicated his intention to change the wording of the oath to Al Masry al Youm earlier on Sunday.

Mansour’s recitation of the oath led to shouting among some MPs. Acting Parliamentary Speaker Bahaa Abu-Shoqa threatened to suspend the first session of parliament after Mansour refused to repeat the official text of the oath. Mansour eventually hurriedly repeated the oath in its correct form, adding, “It is the first oath that I took which comes from the heart.”

MP Tawfik Okasha also spoke out against the January 25 revolution. In his bid for candidacy for speaker of parliament, Okasha said, “It is a big honor for me to be one of those who urged people to revolt on June 30 and as a result the new parliament should represent the June 30 revolution only.”

Mansour, Okasha, and other MPs also attempted to silence MPs who praised the January 25 revolution. MP Mohamed al-Etmani was silenced by his peers when he attempted to defend January 25 during his announcement of his candidacy for speaker of parliament.

So, biggest debate in 1st session of #Egypt‘s new parliament, convening for 1st time after 3 years, is over acknowledging #Jan25 revolt..

#EgyptParliament held a moment of silence for EG heroes who lost their lives defending Egypt from terrorists https://t.co/7nv8Hx7UR2

On the eve of the first parliamentary session, 13 NGOs, among them the Cairo Institute for Human Rights Studies and the Egyptian Initiative for Personal Rights, issued a joint statement detailing nine recommendations for the newly-elected body.

The NGOs called on the parliament to:

While new or existing laws have yet to be discussed by the newly-elected parliament, which now has 87 female Members of Parliament, several women’s rights groups have already put forward a series of laws to be considered. The General Federation of Egyptian Women prepared a personal status draft law for consideration, and the Cairo Center for Development prepared a law for domestic violence and human trafficking. The New Woman Foundation (NWF) also called for women to participate in the drafting of a municipal elections law, and is pushing for amendments to the labor law. Finally, the Children of Women Prisoners Association is pushing for amendments to Egypt’s child law, particularly where children of incarcerated women are concerned.

Meanwhile, Nubian Member of Parliament Yassine Abdel Sabour told Al-Monitor that he intends to push for the implementation of a constitutional article guaranteeing the Nubian right of return to the Aswan High Dam region following their displacement in 1964.

Sisi issued a statement on Sunday night following the first session of the new parliament. “We totally respect the separation of powers and I wish to show all support and help for the newly elected parliament,” the statement said. He also said that the parliament can expect to receive “all support and assistance” from Egypt’s executive branch.

“The parliament will fulfill the hopes and aspirations of the Egyptian people in the formation of a modern state that upholds the values of democracy and justice in order to complete the process of development which was begun by the Egyptian people,” Sisi said.

Elissa Miller is a Program Assistant at the Rafik Hariri Center for the Middle East.

Image: Photo: Tawfik Okasha (R), looks onvote to choose the head of the Egypt's Parliament late in Sunday's procedural and opening session at the main headquarters of Parliament in Cairo, Egypt, January 10, 2016. (Reuters)