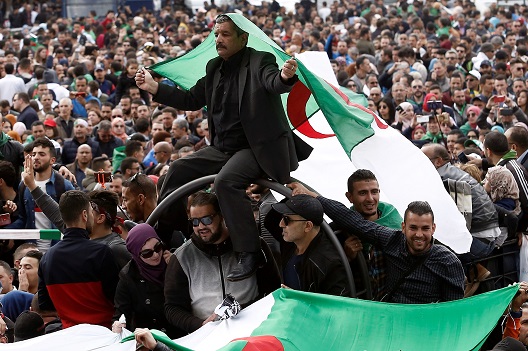 Photo: A man carries a national flag during a protest against the appointment of interim president, Abdelkader Bensalah demanding radical changes to the political system in Algiers, Algeria April 10, 2019. REUTERS/Ramzi Boudina

On the afternoon of April 5, 2019, just three days after the resignation of Algerian President Abdelaziz Bouteflika, demonstrators took to the streets once again after nearly eight weeks of protest. As many predicted, the demand to end Bouteflika’s twenty-year rule was one of many to come. The demonstrators’ February chants of “no to Bouteflika,” specifically protesting against his bid for a fifth term, shifted to broader demands to remove the system, or “Le Pouvoir.” Calls for the dismantling of the system speak to long-held grievances against the country’s endemic corruption and stagnant economy.

While the leaderless popular movement appears united so far in what it stands against, it remains to be seen whether it will be able to agree on its demands and emerge as a coherent political force. The movement’s support from a broad cross section of society could help it politicize to solidify gains, but many obstacles lay ahead.

Although Algerian leaders came out of the Arab Spring unscathed, the country has a long and cherished history of activism. The struggle for independence from colonial French occupation and eventual victory in 1962 is a legacy claimed by Algerian civilians and soldiers alike, and protests were integral to the revolution. This legacy is invoked by the current popular movement which features slogans and relics from the war. Algeria experienced its own political opening and uprisings between 1988 and 1991, when hopes for democratization were quashed in response to the electoral victory of the Islamist movement; setting off a decade of civil war.

And while collective memories of the bloody “Dark Decade” may have inhibited Algeria’s full participation in the Arab Spring uprisings that began in 2010, they did indeed participate. Algerians protested over the same grievances expressed in the region—a lack of political freedoms and human rights, widespread corruption, slow economic growth, and skyrocketing unemployment rates—from late 2010 into early 2013. Additionally, local protests continued every year after: against Bouteflika’s reelection bid in 2014, shale gas fracking and associated workers’ rights in 2015 and 2016, and austerity measures throughout 2017 and 2018.

If protests in Algeria are nothing new, what makes the current protests different? For years demonstrations over socioeconomic grievances have taken place regularly in Algeria despite a de facto ban on protests, but have generally taken aim at local rather than national politics. The current protests’ broad goal of systemic change seems to correlate with broad public support. While protests in the past were dominated by young, unemployed men or male-dominated independent trade unions, the current movement is more diverse, and women have been at the forefront of the resistance. People of all ages, all classes, and all vocations have turned out; families even bring their children to the protests after Friday prayers. Notably lacking from the protests are Algeria’s organized opposition, especially Islamist and socialist political parties, who have been largely excluded by the protestors who fear a government crackdown like that seen in the 1990s. It may be because of this exclusion that no outbreaks of violence occurred from protestors or the government after weeks of protest.

The unique nature of the current movement will play a role in its ability to consolidate gains and if it can affect structural change in Algeria. The question is, will it be for better or worse? Support from all segments of society can be a strength in mobilizing citizens, but it can also be a weakness. While a few protest leaders have emerged, they have not united the popular movement—finding a voice that can claim to speak for such a heterogenous group will be difficult. Even more so will be selecting one with a knack for political negotiation, a will to compromise, and who can simultaneously retain credibility with the popular movement he or she leads. Successful revolutions require symbolism, but also demand strategy.

Article 102 of Algeria’s current constitution requires that Bouteflika’s resignation be followed by a new presidential election within ninety days, during which time Abdelkader Bensalah, President of the Council of the Nation and Bouteflika ally, will serve as interim president. It is unlikely that the popular movement will be satisfied with a transition process that keeps power in the hands of regime insiders like Bensalah or Ahmed Gaid Salah, Algeria’s army chief of staff. However, the entrenched power structure will not be shaken by protests alone.

Without organization and leadership, it will be easy for regime insiders to coopt the revolution by exploiting their own status as the only group able to enact real political and constitutional change. However, the Arab Spring in 2011 taught onlookers that patience is needed; political change is a slow, and painful process.

Politicizing the popular movement in Algeria will be challenging, and the regime will likely work tirelessly to make it more so. Unable to justify the use of force to crack down on the protests so long as they remain peaceful, some analysts have suggested that those in power may instead try to fracture the popular movement or infiltrate it to make it seem more extreme or violent than it is, as Arab governments have done in Syria and Egypt.

A fracture between the business and political elite and the military could lead to a military takeover, which would further diminish the popular movement’s chances of affecting profound political change.  In either case, military leaders may continue to try to appease the popular movement, stalling by offering small reforms and scapegoating those seen as close to Bouteflika, while continuing to maintain power and control.

The longer demonstrations go on, the higher the risk of lost momentum. Protestors may lose interest or the means to continue, and divides may appear between those who want to militarize and those who want dialogue. For this reason, the movement will need to select leadership carefully and set initial demands sooner rather than later if there is to be any chance of changing the power structure in Algeria. This is easier said than done, but perhaps the popular movement’s inclusive nature means that it includes people—especially women—who are more willing and able to negotiate.

Emily Burchfield is an assistant director at the Rafik Hariri Center for the Middle East.