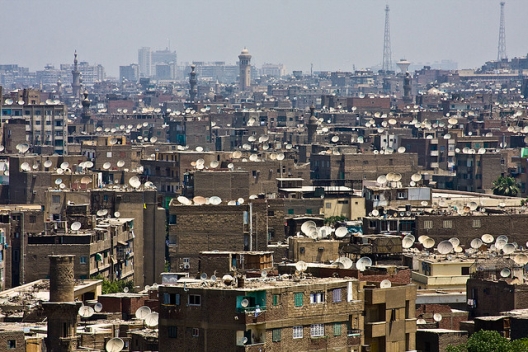 It’s just past three o’clock in December and the Dot Masr office is bustling. Dozens of twenty-something Egyptians tap away at desktop computers in the website’s open newsroom in the two-story office in Garden City, Cairo — prime real estate.

Dot Masr is an openly Emirati-funded news and entertainment website that the Editor-in-Chief, Khaled Al Berry, calls “the future” of Egyptian media. Seated in his expansive office overlooking the Nile River, he jokes when asked what attracted him to the job: “Other than the salary?”

When it launched, Dot Masr had another attractive selling point: Abdullah Kamal, the website’s wealthy and well-connected founding father. Kamal was a strong supporter of ousted President Hosni Mubarak, editor in state-run media, and leader in the now disbanded National Democratic Party (NDP). He died six months after launching Dot Masr, never seeing through his first entry into the media-ownership game.

Two years in and Dot Masr has not become a major media challenger. Neither, given current trends, is it likely to last. It’s a hostile environment right now for new media ventures, Egypt watchers say, because of what’s still unfolding: a cautious rebalancing of power between the Mubarak-era media moguls and the ruling military elite to dictate the who, what, where, when, and why of Egyptian media going forward.

“The new/old military regime has yet to weave its own ties with this class of businessmen in a way that can be productive for both sides, just like Mubarak did somehow,” said Lina Attalah, the Editor-in-Chief of the website Mada Masr, considered one of Egypt’s few remaining independent news sites.

Attalah added, “It’s extremely unsustainable for these privately owned media, which we used to call independent media, to continue basically reproducing the narrative of the state media.” Attalah chose to describe these media as private — neither state nor party-owned — rather than independent, because of what she described as the significant sway owners have over agenda-setting. “So my expectation is that this will have to change, and there seems to be the beginning of that somehow.”

Dot Masr and Mada Masr are among only a handful of new media initiatives to take off in Egypt since July 2013, when the military — with much of the privately-owed media’s backing — ousted Islamist President Mohamed Morsi, retook power, and ushered in a still-ongoing wave of repression, censorship, and pro-military media coverage. It’s a stark shift from the first three years after the 2011 Revolution, when Egyptian media expanded fast, with many new privately owned newspapers, television channels, and websites popping up. They were mainly funded by the same cadre of well-known tycoons but still represented hope that Egyptian media was on a liberalizing path.

“What’s interesting, particularly in the last year, is that it showcased the erosion of the illusion that the media landscape has been opened in Egypt,” argued Attalah in December. “You realize that even though there has been liberalization, it remains completely concentrated in the hands of a few, who happen to be extremely aligned in their political line. And their media reflected these stances.”

She added, “The relationship between the business community and the new regime is in the process of being settled, but it’s not settled yet.”

For decades, the Egyptian state maintained a tight media monopoly on broadcast journalism, while also dominating the print sector. Then in the early 2000’s, Mubarak, in response to domestic and international pressures, initiated a series of light liberalizations, allowing for private satellite channels and privately owned newspapers.

Despite the financial rewards, the regime and media moguls never had an easy alliance. Relations among Mubarak, his sons, and the businessmen fluctuated as they used these enterprises as bargaining blocks to contest and control political and economic power. The state also maintained control of vital parts of the communication sector and dominated the printing press and satellite industry. In this way, a regime of censorship reigned, ingrained both by formal laws regulating pre- and post-publication, and the socialization of certain norms of censorship from the top down to everyday newsroom relations. After Egyptians elected Morsi president in June 2012, the media grew increasingly polarized along a pro- and anti-Morsi line. When the military ousted Morsi in 2013, Egypt’s private media infamously rejoiced the move — except for the Islamist media, whose journalists were promptly arrested and sites shut down.

Such was just the case for Tamir Wagih, a prominent journalist and human rights activist, who last year was recruited to help run a media project funded by Egypt’s richest man and media mogul Naguib Sawiris — until the founders suddenly suspended the project. The media venture, called Al Faslah, was intended to focus on in depth investigations in Egypt and the region. Wagih said he initially refused the offer, citing concerns over the Sawiris association. But overtime he became convinced it could be something new. So Wagih signed the contract. Less than ten months later, the funding was cut.

“One of the things they said was that Naguib Sawiris changed his mind,” Wagih recalled. “That he was now concerned with opening projects that would make a hassle with no revenue.”

The CEO of Al Faslah at the time, Amr Abaza, denied that politics was the cause of the closure, but declined to comment on the specifics of the venture. Abaza said that after several delays they put the project on hold due to “consolidating and restructuring” efforts. If and how Al Faslah fit into this, Abaza said, was still being figured out.

Now the question remains when and how Egypt’s media moguls will try and challenge the regime over their place in the political equation.

“There’s a lot of heresy and rumors that sometimes turn into open secrets about who owns what,” said Hossam Baghat, one of Egypt’s leading human rights advocates. “Most of the interesting movement that I hear of now is in how basically huge advertising cartels are coming to control the media scene.”

In January, prominent publisher and Al-Masry al-Youm (AMAY) founder Hisham Kassem argued that the cracks in the regime are already there: between the lines of critical opinion pieces and investigations, Kassem said, Egypt’s media (and the men who back it) are starting to flex their muscles vis-a-vis the regime.

Kassem, like several other media watchers, predicted in January that it would be a significant sign if prominent journalists who had gone “silent,” chief among them Reem Maged and Yousri Fouda, were to return to air. Private media, after all, loses its market edge if it just continues to parrot state media. Flash forward several months and Maged just announced in April that she’s coming back to OnTV— for a show about women in the Middle East, rather than only Egyptian politics like before. Meanwhile, rumors continue to circulate that Fouda will be returning, but nothing yet is confirmed.

Still, Ahmad Ragab, the Chief Editor of Al Masry Al Youm’s online portal, sees other signs of shifts underway. Ragab described the relationship between Sisi and the public and media as an “alliance of fear:” people have supported Sisi’s iron-fisted rule out of fear that the alternative, such as the bloody insurgency underway in the Sinai Peninsula, would be worse. But now, he argued in April, the alliance is weakening as people are less and less frightened by each report of violence or a Muslim Brotherhood threat. Ragab cited as anecdotal evidence AMAY’s coverage of military abuses and online trends in readership: increased interest in stories about the economy and society, and less about the Muslim Brotherhood and terrorism.

But Ragab also worried about the larger picture. He mapped it out in a notebook. Politics under Mubarak, he diagrammed, operated via several main circles of power — Mubarak himself, his sons, the ministry of interior, the military, the National Democratic Party, the mukhabarat — each with their own business alliances. Now, he diagramed, “all the businessmen are around this one strong man” — Sisi. “It’s physics,” he said. “Something has to change.”

Ragab is one of the Egyptians the international community hears less about: the one’s still trying, day to day, to fight against a crackdown in their own ways. If Egypt’s channels all closed he said, there’d be nothing but government and gulf media. He has an idea for a media venture — but, like many others, is also looking for funding.

Wagih surmised in January it could still only go so far.

“The media will be more varied in a way,” predicted Wagih. “Not in the sense of an independent, professional, or oppositional media… But varied among the ruling elite and the trends of businessmen. It will be something like an uneasy alliance between the businessmen and military.”