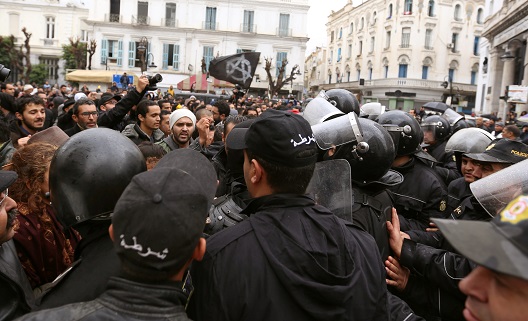 Seven years after the 2011 Arab uprisings, Tunisia remains the only country to have emerged from the sweeping changes that took hold in the region as a fledgling democracy. Since then-President Zine El-Abidine Ben Ali stepped down from power of January 14, 2011, Tunisia has accomplished a number of major successes, including holding free and fair national elections, fostering political compromise, implementing reforms to institute equal protection for men and women under the law, and making progress on freedoms of expression and belief. Economic challenges and political setbacks, however, could upset Tunisia’s advances.

While economic grievances were a significant driver of unrest in the Arab world, protests in Tunisia did not start amid economic stagnation. In the years leading up to the Jasmine Revolution, macroeconomic indicators in Tunisia, as well as other countries in the region like Egypt, were positive. Along with Tunisia, macroeconomic performance in the North Africa countries of Algeria, Libya, and Morocco averaged between 4 and 4.5 percent a year in the decade prior to 2010. In the five years prior to the revolution—from 2005 to 2010—Tunisia’s gross domestic product (GDP) grew by more than 36 percent, the percentage of the population living on less than $1.90 per day fell by more than a third, and the infant mortality rate decreased by nearly a quarter.

However, this economic growth was characterized by a lack of inclusivity and masked significant structural deficiencies in Tunisia’s economy that contributed to the discontent that fueled the Arab Spring. In 2010, Tunisia suffered from high levels of unemployment—approximately one in eight Tunisians were unable to find work. The nation’s youth were disproportionately represented in the unemployed population, with nearly 30 percent of Tunisians 15 to 24 years of age unemployed. Meanwhile, Tunisia rated among the world’s 10 percent worst countries for voice and accountability, political corruption measured near the maximum levels, and the top 10 percent—the wealthiest—of Tunisians controlled over 27 percent of the nation’s income (whereas the bottom half shared less than 26 percent). In this environment, the revolution’s calls for “Work, Freedom, Dignity” reflected the significant income and wealth disparities among the elites and much of the rest of the population.

Following the revolution, successive Tunisian governments struggled to undertake difficult structural reforms that are necessary to put the economy on track towards inclusive growth, preferring to prioritize the political transition while also struggling with security threats. While 2017 saw some progress on the economic front, the Tunisian government is still struggling to implement economic reforms, and it is unclear whether today Tunisia is a better place for many of its citizens than its pre-revolution equivalent. One indicator—youth unemployment—may be a critical determinant as to whether Tunisia in 2018 appears on the path toward a consolidated democracy or at risk of continued instability. In addition to playing a key role in fueling the revolution, youth unemployment contributes to Tunisia’s status as a leading supplier of foreign fighters to extremist groups in the region.

In 2018, long-promised municipal elections and economic reforms focused on inclusive growth that embrace the concerns of the youth population could contribute to a stronger and more democratic Tunisia. However, if the government continues to shy away from structural reforms and postpone municipal elections, Tunisia’s future may be less promising.

The International Monetary Fund (IMF) expects the Tunisian economy, which saw about a 2 percent growth in 2017, to continue to grow to 3 percent in 2018 amid improvements in security and increased tourism, rising investments, and a strengthening export market in Europe. Several economic indicators suggest Tunisia may be on track toward a stronger economy, such as labor force participation rates that exceed pre-revolution levels, with a nearly 9 percent increase in the total size of the labor force from 2010 to 2016. The growing labor force could spur economic growth by leading to greater participation in the formal economy—some estimates say Tunisia’s informal market accounts for 40 to 60 percent of the overall economy—and bringing in much-needed government revenue through both taxes on labor and consumption.

However, much like the pre-revolution period of economic growth, continued high levels of unemployment may mean that large segments of the population will not see the benefits of economic growth. Moreover, needed structural reforms to reduce the size of the public sector workforce, increase taxes, and raise social security contributions will hit ordinary Tunisians hard.

These structural reforms are necessary to both reduce the country’s growing deficit and ensure that growth benefits a wide range of Tunisians, but it is it is evident that the government is aware of the large scale instability that these measures could provoke. This dynamic has put Tunisia in a difficult position between its international lenders—chiefly the IMF—and powerful domestic interests groups such as labor unions.

Yet amid this difficult reality, there are steps that the government can nevertheless take to further progress on the economic front. With World Bank ratings of Tunisia’s government effectiveness and regulatory quality decreasing since the revolution, reductions in non-priority spending such as energy subsidies, which disproportionately benefit the wealthy, could free up resources toward improving government service provision and performance. In addition, the government can take advantage of successes in other areas, such as improving the ease of doing business in the country, which has remained unchanged since the revolution, and participation in the G20 Compact with Africa, to promote private investment and spur continued improvements in infrastructure development. Increased investment, as well as technical and policy advice as part of the Compact, could empower the 36 percent of Tunisians with entrepreneurial ambitions to further grow the economy. Finally, prioritizing negotiations of the Deep and Comprehensive Free Trade Area with the European Union could bring even further benefits to include much-needed inflation control and attracting foreign direct investment. Progress on these measures could contribute to addressing the youth unemployment rate in 2018 as Tunisia strives to pursue inclusive growth that enhances the stability of the country.

Post-revolutionary Tunisia has garnered praise from organizations including Freedom House and the World Bank for liberal democratic improvements, including improved governmental accountability and rising political participation. However, these same organizations highlight concerns regarding rising corruption and limits to civil liberties. Indeed, recent public opinion polls demonstrate widespread concern with worsening corruption and little support among the population for the country’s political leadership. The repeated postponement of municipal elections amid political strife, combined with the country’s economic challenges, threatens to reduce the already-low confidence of many Tunisians in the political process.

The ability of political leaders to entice key populations, such as the nation’s youth, to participate in voting in large numbers could determine electoral victors in May 2018. Yet there are signs of growing apathy among Tunisian youth when it comes to the political scene. Local politicians and national political parties could address these problem by deliberately engaging with young Tunisians throughout the campaign process. Such engagement must send the message that plans for reform will work to address issues such as high youth unemployment and barriers to start and run businesses. The level of engagement and participation in the 2018 municipal elections may be an indicator of political interest in and outcomes for the 2019 national elections, making the turnout and results of this year’s polls particularly consequential.

Tunisia at a crossroads

Tunisia is at a crossroads as it enters 2018. Continued economic growth and major reforms could consolidate political and social gains over the last seven years. However, an alternative Tunisia could also emerge—one in which repeatedly postponed municipal elections witness low voter turn-out rates, large segments of the population are excluded from economic growth, and public opinion of political parties continue to plummet amid persistent perceptions of corruption.

The improvement of one indicator—youth unemployment—plays a critical role in placing Tunisia in the former or latter reality. Levels of youth unemployment demonstrate whether economic reforms drive inclusive growth that benefits the majority of Tunisians. This impacts whether Tunisia in 2018 will harbor either an increasingly disgruntled population—at worst at risk of radicalization, at best at risk of political unrest—or a youth population empowered to leverage knowledge and entrepreneurial spirit as vehicles of economic growth. Tunisia has the potential to grow into a durable democracy as it approaches a decade after the revolution, but the inclusivity of economic reforms and political engagement may determine whether the country realizes its full potential.