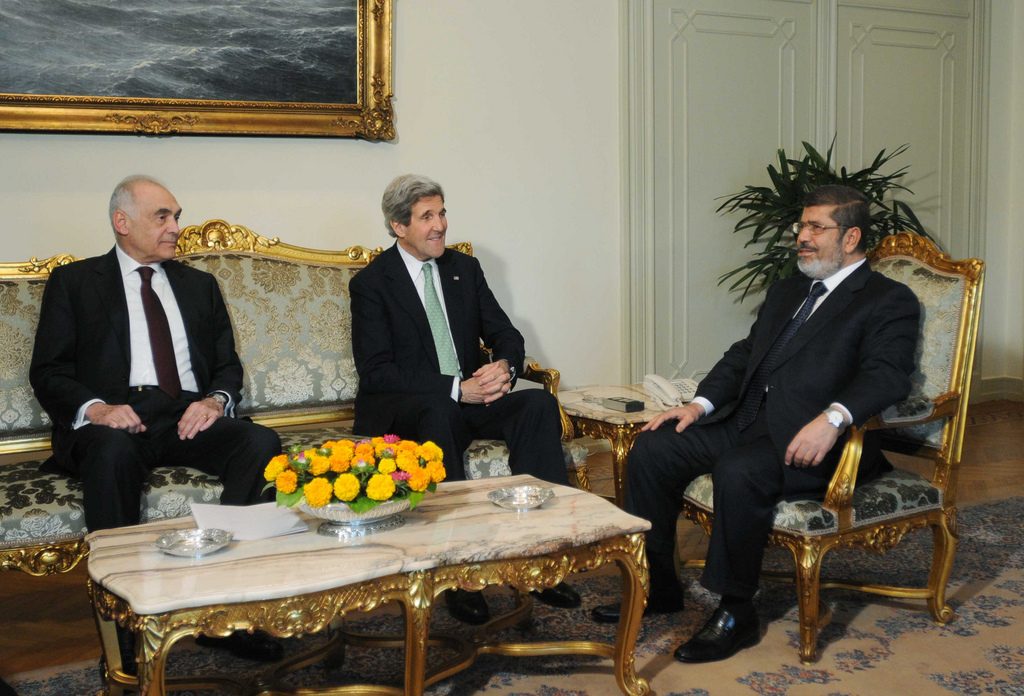 The immediate US statements about an Egyptian court’s June 4 decision to hand down prison terms to employees of prominent American and German pro-democracy nongovernmental organizations (NGOs) in Egypt constitute a strikingly subdued response to an extraordinary episode. The Egyptian government—the recipient of well over one billion dollars of annual aid and other significant support from Washington, and purportedly leading a transition to democracy—sentenced all forty-three defendants, including sixteen US citizens, plus Egyptians, a German, and other nationals to jail, closed their offices, and confiscated the groups’ property. It put them on trial in the first place essentially for conducting post-revolution democracy seminars and election trainings with foreign funding (especially monies from the US bilateral aid program) without formal approval.  Egyptian authorities claimed that this threatened national security. This same government has shown little interest in more obvious judicial priorities, such as bringing security forces to justice for maiming and killing thousands of its citizens.

The episode, Egypt’s worst crackdown on civil society workers in recent memory, should mark a low point in bilateral relations. It is impossible to understand the vitriolic state media campaign against the NGOs, the deeply flawed trial open to manipulation, and the egregious sentences as anything other than a deliberate act to poke a finger in the US eye, intimidate Egyptian civil society activists and the United States government, and flout global democratic standards.  The court’s justification contains no clear legal reasoning or evidence but many xenophobic rants.  President Mohamed Morsi, who inherited the problem from the military-led government, did nothing to avoid this outcome. In the face of all this, the US response conveys a persistent reluctance to challenge Egypt on democracy and human rights issues critical to Egypt’s future.

The June 4 statements from the White House and the State Department use boilerplate language expressing “deep concern” about the convictions. (The German government, by contrast, said it was “outraged.”) As would be expected, the US statements describe the important role of NGOs in protecting democratic rights and mention that Egypt’s actions run contrary to international standards, but otherwise come up short. They do not refer to Egypt’s actions against American citizens, which one would expect to be Washington’s priority. The White House statement conspicuously omits the most forceful phrase in the State Department version—that the court decision “is incompatible with the transition to democracy.” Cairo surely will note the White House’s even more muted language.

Surprisingly, the US statements fail to defend those convicted by affirming the legitimacy of their activities and funding. The statements “urge” the Egyptian government to allow civil society groups to operate freely in a generic sense.  But they distinctly fail to cite the Egyptian government’s responsibility toward this specific, landmark case with its vast negative implications for Egyptian civil society. For instance, the statements do not call on Morsi to guarantee a fair appeals process, to use his clemency authorities, or to mitigate the decision to seize the NGOs’ assets, which are after all US government property. Most significant, the statements promise no firm US actions and no potential consequences to the bilateral relationship.

Compounding the impression of US passivity were the June 4 remarks by State Department Spokesperson Jen Psaki.  Although noting the US “deep concern” and continuing “focus” on the case, the spokesperson also referred to Egypt’s “democratic transition,” suggesting that the verdicts do not alter the US assessment that Egypt is in fact moving toward democracy. Psaki was not able to confirm whether or not Secretary of State John Kerry raised the trial in his meeting in Ethiopia with Morsi a few weeks ago. Most troubling, in a misplaced emphasis, Psaki seemed far more focused on making the case for ongoing US assistance for Egypt than on denouncing the convictions. She referred several times to the security imperative for aid for Egypt now.  When asked if there were any plans to hold back funds, she replied there was “nothing to update at this point.”

The United States clearly wants to resume business as usual quickly with Egypt. Rather this should be a moment to pause, absorb the significance of what has occurred, and then begin to adjust our posture.   Downplaying the importance of events that close off space for peaceful mainstream democratic activity runs counter to the overarching long-term US interest in an Egypt that becomes more stable and moderate.  Appearing as an overly-solicitous partner to Cairo (how many in Egypt unfortunately will interpret the US reaction) does little to help the United States increase its standing or gain leverage to pursue vital security interests. In the days and weeks ahead, the United States should do five specific things:

As the pop psychology phrase goes, “When someone shows you who they are, believe them.” Egypt has now showed the United States its willingness to play hardball with civil society (and with Washington) in a way that should be impossible to ignore. And the United States, as the world’s most powerful democracy and still the nation most important to Egypt, should send its own very strong signal right back. The US relationship with Egypt is multifaceted, and the United States has no choice except to keep working with Egypt on certain issues. But this Egyptian government does not have an unquestioned right to US aid or to international democratic legitimacy.

Amy Hawthorne is a senior fellow with the Rafik Hariri Center for the Middle East.