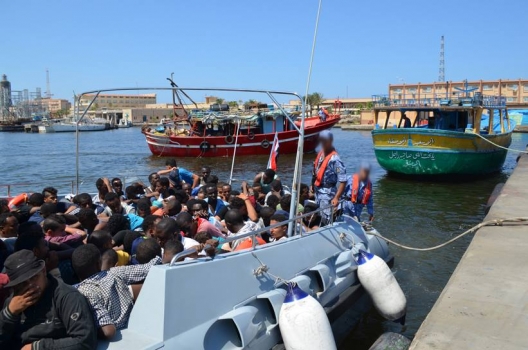 Egypt is now one step closer to passing a migration law that would, for the first time in the country’s history, outlaw and proscribe penalties for the crime of people smuggling.

The news comes as European and Mediterranean states navigate their way through a worsening refugee and migration crisis. This year, thousands of people have left Egypt’s north coast for Europe and more than 3,000 people have been detained, according to the United Nations High Commissioner for Refugees (UNHCR) and the Egyptian Initiative for Personal Rights (EIPR) in Alexandria.

On September 6, the national security committee for legislative reform approved the draft bill, after it was submitted by the National Committee for Combatting and Preventing Illegal Migration (NCCPIM), which comprises eighteen ministries and state bodies including the ministries of interior, defense, youth, and manpower.

The bill must now be approved by the national committee for legislative reform before being ratified by the Cabinet and finally signed into law by President Abdel Fattah al-Sisi.

Ibrahim al-Heneidy, Egypt’s Minister of Transitional Justice, told state-run news agency MENA on Sunday that the draft law would see people smugglers handed five-year prison sentences, as well as fines ranging from 50,000 to 200,000 Egyptian pounds. Prison sentences will depend on the circumstances of the crime. If an irregular migrant dies during the course of irregular migration, the smuggler in charge of or facilitating that trip could face up to twenty-five years in prison. The same sentence would go to a smuggler or smuggling network found to engage in terrorism, Heneidy added.

According to Aswat Masriya, the draft also refers to irregular migrants as “victims.” The NCCPIM has also recommended that a fund be established to assist victims of irregular migration — with money possibly accrued from the fines levied against smugglers.

But what can we expect from the draft law? Why is it significant? And will it actually change things on the ground?

There were some concerns about the draft law as early as April, when the Egyptian Union for Human Rights (EUHR), a non-governmental organization, proposed its own migration draft that would proscribe the death penalty for people smugglers and fifteen to twenty year prison sentences for irregular migrants — including refugees and people seeking international protection. However, two NCCPIM representatives confirmed to EgyptSource this week that the draft approved on Sunday originated from the committee.

The committee has engaged in several consultations with international bodies, including UNHCR and the International Organization for Migration (IOM), as well as migration experts, during the year-long drafting process.

Amr Taha, IOM Program Director in Egypt, explained earlier this year that during consultations for a “more comprehensive migration law in Egypt,” the organization had put forward four recommendations to the Egyptian government. Those suggestions included amendments to laws dealing with children, in response to growing numbers of unaccompanied minors travelling from Egypt; amendments to shipping legislation in order to prosecute captains or crews working in the smuggling trade; amendments to labor laws to prosecute employers who knowingly employ individuals who are staying in the country with irregular status; and amendments so that smugglers could be punished.

A source who attended one consultation meeting meanwhile said Egyptian officials in attendance had been disproportionately focused on the irregular migration of Egyptian nationals, as opposed to the refugees and asylum seekers who make up the majority of irregular flows from Egypt. This claim is arguably confirmed by the language used by Egyptian officials when discussing irregular migration. While Egypt has been a part of the international conversation on the current refugee crisis, most recently at a conference in France, at a local conference addressing illegal immigration, Manpower and Immigration Minister Nahed al-Ashry presented irregular migration in terms of “the youth” and “youth unemployment.” This can be reasonably understood as addressing the roots of migration by Egyptian nationals rather than refugees or asylum seekers. Although employment and the ability to make both a livelihood and sustainable future is an important factor, the reasons why a Syrian, Sudanese, or Somalian refugee might decide to take a boat from Egypt is ultimately far more complex

That said, the law proposes two vital areas of reform. The first relates to the smugglers.

An investigation published in independent daily Al-Masry Al-Youm last year quoted Interior Ministry official Nagah Fawzy as saying that before 2011, when migration flows largely consisted of Egyptian migrants, the authorities had to “apply [the] Emergency Law against smugglers” on the vague grounds of threatening public safety. That would be no longer possible after the January 25 revolution and the subsequent end of the Emergency Law.

Therefore, until now, Egypt has not had the legal capability to prosecute people smugglers, having only Law 64 for the year 2010, which is aimed at human traffickers instead. Trafficking and smuggling, while often used interchangeably in the media differ significantly in terms of volition.

Lawyers in Alexandria, as well as anecdotal reports from refugees in detention, have repeatedly stated that smugglers have fallen into Egyptian custody many times before, but have been released shortly afterwards.

That would change under the new law. On this point alone, civil society researchers and migration experts have welcomed the draft.

However, one side note that could complicate the prosecution of smugglers in Egypt is the rumored cooperation between smuggling networks and state actors. An investigation by The Guardian’s Patrick Kingsley reported that Syrian networks in Egypt include someone known as a monassek, or ‘organizer.’ The monassek ferries passengers between a safe house and a boat —making sure security officials don’t disrupt that journey. Depending who you ask, it is either common knowledge or a strongly held suspicion that smugglers are in cahoots with members of Egypt’s security apparatus. The Interior Ministry, some Egyptian fishermen, and even some smugglers deny this. If true, the new migration law would put an end to a loophole that has reportedly existed since Egypt’s 2011 revolution, effectively enabling smuggling networks to operate and flourish without fear of prosecution.

Equally important is the fact that under the new law, irregular migrants — refugees, asylum seekers and migrants attempting to reach Europe — would no longer be criminalized under Egyptian law. According to the wording of the legislation, they are regarded as “victims.” As Egyptian officials noted, this brings Egyptian legislation more in line with the country’s international obligations — namely the 2000 Convention against Transnational Organized Crime, which recommends that signatory states “prevent and combat the smuggling of migrants…while protecting the rights of smuggled migrants.” This duality is at the core of the draft law.

At the same time, questions remain about how the impending law would affect Egypt’s use of border control and immigration detention.

At the border, and inside the unpredictable liminal spaces operated by the Egyptian state, refugees, asylum seekers, and migrants are susceptible to rights abuses and extended periods of administrative detention. This can happen anywhere from a police station in Alexandria to other, more difficult-to-access detention facilities, including Qanater Foreigners’ Prison and a transfer center in Marsa Matrouh. Other risks can include forcible deportation or refoulement — namely, the return of a refugee or asylum seeker back to an origin country where there life or freedom may be harmed. A recent Amnesty International report on Syrian refugees, for example, noted that “over the past two years…the situation in Egypt has become increasingly precarious,” sometimes resulting in “arbitrary arrests and detention and, in some cases…forcible deportation to Syria or other neighboring countries in the region.”

And, as Egypt’s 2014 Constitution can attest, sometimes promising legalization does not translate into promising developments on the ground.  On paper at least, it seems that the NCCPIM has made notable improvements to Egyptian laws regulating migration. Its next big challenge will be seeing that implemented fairly and consistently — from police station to police station, refugee to refugee.

Tom Rollins is a freelance journalist based in Cairo