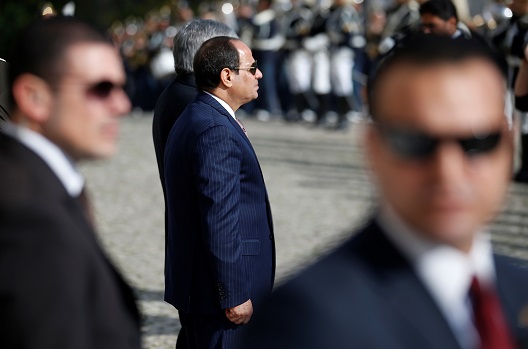 On April 3, Egypt’s President Abdel Fattah al-Sisi will visit the White House to meet with US President Donald Trump. Sisi’s first visit to the White House is important for US-Egypt relations. Both leaders have repeatedly expressed admiration for one another, and Cairo appears eager to push for a stronger bilateral relationship that it perceives will do more to benefit its interests than its strained relationship with the Obama administration. Ahead of the visit, the White House released a statement praising the “positive momentum [Trump and Sisi] have built for the United States-Egypt relationship.” Cairo has also been vocal in expressing support for strategic US-Egypt ties and enhanced cooperation under the Trump administration.

In addition to the overall strengthening of ties, Sisi likely has four major priorities for this visit: securing US support for Egypt’s counterterror interests; pressuring the United States to designate the Muslim Brotherhood as a terrorist organization; promoting Egypt’s economic reform program; and presenting Egypt as a leading regional power.

Egypt presents itself as being on “the frontlines of the global war against terrorism” and extremism. That narrative drives much of the Egyptian rhetoric surrounding US military assistance to Cairo. During a recent visit to Washington, meetings included Deputy National Security Advisor KT MacFarland and senior director for Middle East policies on the National Security Council Derek Harvey,  Sameh Shoukry called for the continued US assistance to Egypt crucial for the country’s counterterror operations and efforts to maintain regional stability. He further described Egypt as “the country most capable [of confronting] extremist ideology amidst a region engulfed in conflicts and disputes.”

Cairo has also made efforts to present military assistance to Egypt as beneficial for US interests in the region. Today, Egyptian Army Chief of Staff Lt. Gen. Mahmoud Hegazy met with the head of US Central Command Lt. Gen Michael Garretto to discuss military cooperation. A statement from the Egyptian military said the meeting focused on the importance of continuing coordination and strengthening ties “in a way that serves the mutual interests [of both countries].” This rhetoric will certainly be echoed by Sisi during his visit next week.

Sisi’s meeting with Trump also comes on the heels of two other major global meetings, both of which offered Cairo an opportunity to discuss Egypt’s counterterror vision ahead of the Trump-Sisi meeting. On March 22, US Secretary of State Rex Tillerson hosted the meeting of a 68-member Global Coalition to Counter the Islamic State (ISIS, ISIL or Daesh) in Washington. At the meeting, Shoukry emphasized Egypt’s efforts to fight extremist ideologies through “religious moderate platforms.” In 2015, Sisi called for a “religious revolution” and urged Islamic scholars to engage in reforms that would help fight extremism. Cairo has been battling militants in the Sinai since 2013; in late 2014 the militant group Ansar Beit al-Maqdis pledged loyalty to ISIS. Days later in Amman at the 28th Arab Summit, Sisi called for a “comprehensive” approach to fighting terrorism in the Middle East that underlines the role religious institutions, particularly Egypt’s al-Azhar, can play in that effort.

Sisi’s visit also comes amid Trump’s proposed budget cut, which would significantly reduce spending on US foreign aid. However, the administration is unlikely to cut foreign military financing to Egypt, which makes up the bulk of the $1.3 billion in annual assistance the United States gives to Egypt. Still, Egypt may also use the visit and surrounding security rhetoric to advocate for the renewal of cash flow financing (CFF), a perk allowing Egypt to buy US defense equipment on credit that the Obama administration ordered to be terminated by 2018. In the current budget climate, it appears unlikely that a decision would be made to continue CFF in its current form post-2018, despite efforts by some US lawmakers to push legislation that would reverse the Obama era decision.

In the aftermath of the ouster of former president Mohamed Morsi in 2013, Egypt banned the Muslim Brotherhood and labeled the group a terrorist organization. While there has been much debate in Washington since Trump’s inauguration regarding the possible designation of the Brotherhood as a terrorist organization by the United States, the administration has reportedly put on hold an executive order on the Brotherhood, possibly following an internal State Department memo that advised against such an action.

Still, Egypt will continue to push for Trump to make the designation. An Egyptian delegation that included several members of parliament visited the United States ahead of Sisi’s arrival with the goal of pressuring the US administration and members of congress to designate the Brotherhood a terrorist organization. However, the administration is unlikely to follow through on such a step anytime soon because the Brotherhood is a global organization and labeling it as a terrorist organization would impact US policy in other countries. Brotherhood-affiliated political parties are active in major US allies including Jordan and Tunisia. Indeed, the Tunisian Islamist party Ennahda has played a key role in Tunisia’s transition towards democracy.

Egypt will also seek to promote its economic reform and attract US investments. Egypt has taken a number of major reforms as part of its economic reform program, including the adoption of a flexible exchange rate, enacting a value-added tax, and increased fuel prices. In November 2016, Egypt signed a three-year $12 billion agreement with the International Monetary Fund (IMF) that aims to help the country achieve macroeconomic stability and promote inclusive growth. Egypt has also been negotiating funding agreements to fulfill its ambitious commitments in the IMF program with France, the United Kingdom, Germany, Japan, and other G8 member countries.

US investments in Egypt are important as Cairo seeks to attract more foreign direct investment. This week, Egyptian Minister of Investment and International Cooperation, Sahar Nasr, chaired a conference with the American Chamber of Commerce in Egypt. Nasr highlighted new investment opportunities in the country which included new legislation that aims to minimize obstacles to would-be investors. At the conference, AmCham Egypt President, Anis Aclimandos, said he was optimistic that the United States would increase investment in Egypt. Notably, Sisi will be accompanied by representatives from AmCham Egypt and the US-Egypt Business Council next week, who will meet with US businessmen to explain Egypt’s economic reform plans.

It is also worth noting that the Egyptian intelligence recently hired two public relations firms in Washington to boost the country’s image in the United States and highlight, among other things, Cairo’s economic development efforts.

Regional challenges will be high on the agenda during the Trump-Sisi meeting. Not least of these issues is Israeli-Palestinian peace. Sisi is among Arab leaders meeting in Jordan this week at the 28th Arab Summit, a major focus of which will be Palestinian statehood. Sisi has sought to position Egypt as a leading regional actor on this issue. Palestinian President Mahmoud Abbas met with Sisi in Cairo ahead of the Arab summit to discuss the US administration’s position on the Israeli-Palestinian issue as well as Palestinian economic development and security issues. The issue was also discussed in Shoukry’s meetings with Trump administration officials prior to the Sisi visit, who, according to the foreign ministry, were “keen to listen to the Egyptian perspective.”

Finally, Sisi is expected to discuss other critical regional issues including the war in Syria, conflict in Yemen, and instability in Libya. Egypt has worked to position itself as a regional leader on counterterrorism and a bastion of stability in a turbulent region. Sisi will likely present Cairo as a key US partner in tackling regional instability.

There are certainly several topics that are not likely to be on the table for discussion. One of these is the imprisonment of US citizen Aya Hegazy, who has been held in pretrial detention in Egypt for over a year. The verdict in her case was recently postponed to April 16.

Other human rights issues or concerns are also unlikely to find a place on the agenda.  And while it is worth noting that Egypt expressed dissatisfaction with the State Department’s recent 2016 Report on Human Rights Practices, Cairo linked its discontent with the report to the previous administration, saying that it “reflected the view of the former Obama administration which had always sought to tarnish the image of Egypt in any way.” Deputy Foreign Minister for Human Rights Laila Bahaaeddin said the Egyptian government “decided not to make a lot of fuss in the media on a negative report which was issued by the outgoing administration” because Trump “has said he wants closer relations with Egypt.” Closer US-Egypt ties in this context refer to strengthened US support for Egypt’s national security interests—issues of democratic governance and respect for human rights will be pushed aside.

Ultimately, we are unlikely to see any major developments come out of Sisi’s meeting with Trump. Rather, optics will dominate over substance. The visit provides an important opportunity for the Egyptian government to take advantage of positive rhetoric from the White House regarding the US-Egyptian partnership and to continue to push the idea of a “renewed” strategic relationship with this administration.

Elissa Miller is an assistant director at the Rafik Hariri Center for the Middle East.