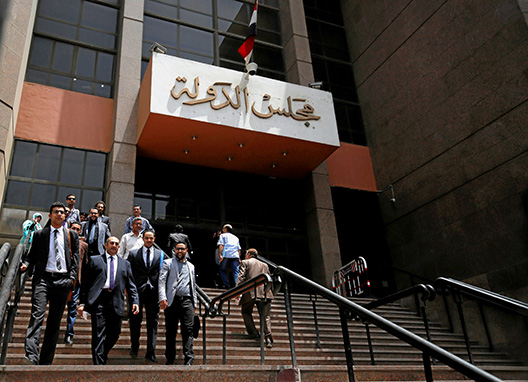 On June 21, in an unexpected move, the first circuit of the Egyptian State Council’s administrative court, headed by State Council Vice President Yahya al-Dakrouri, annulled a Saudi-Egyptian maritime agreement, ceding sovereignty of the two islands of Tiran and Sanafir to the Gulf kingdom. The Egyptian government, at the time, said that Saudi Arabia had transferred the islands to Egypt for safekeeping in 1950.

The April announcement was met with significant street protests as well as legal challenges, with a case filed by a group of lawyers led by human rights attorney Khaled Ali. Over 180 others joined the suit, the most prominent of which include Malek Adly, Alaa Ahmed Seif, Ahmed Saad Douma, Laila Mustafa Soueif, and Mona Ahmed Seif al-Islam.

The court released its opinion in the case, clarifying the legal and historical considerations on which it based its ruling to annul the agreement.

What are the facts of the case?

Ali’s suit called for the nullification of the maritime border agreement between Egypt and Saudi Arabia, as well as any knock-on effects of the deal. The suit demanded a halt to any move to hand the islands over to Saudi Arabia and a continuation of Egypt’s right to full sovereignty over them. The suit also demanded the annulling of any action taken without popular approval in a public referendum. This, Ali argued, was in accordance with the last paragraph of Article 151 of the Constitution: “In all cases, no treaty may be concluded which is contrary to the provisions of the Constitution or which leads to concession of state territories.” The suit claimed that the Egyptian government’s relinquishment of the Tiran and Sanafir islands was an administrative act violating the provisions of Constitutional Article 151 as well as the 1906 agreement demarcating the borders between Egypt and the Ottoman Empire.

What documents were presented by the lawyers who filed the lawsuit?

What was the defense’s argument and how did the court respond?

The primary argument used by the States Lawsuit Authority, which represents the Egyptian government in legal matters, was that the court lacked jurisdiction over the case. They supported this argument with the claim that the agreement itself falls under the umbrella of acts of sovereignty and that it was not an administrative decision to be overseen by an administrative court. They added that the issue of the islands was a parliamentary issue, as the parliament is responsible for approving treaties.

The court’s response to the argument that it lacked jurisdiction over the government pointed to the Supreme Administrative Court ruling that acts of sovereignty are not a rigid theory, but instead are characterized by flexibility. The scope of sovereign acts widens under dictatorial regimes and shrinks as the state becomes increasingly democratic. The court added that Article 97 in the Constitution warns against upholding any act or administrative decision contrary to judicial oversight. The court ruled that the Egyptian government’s signing of the maritime border agreement with Saudi Arabia was not an act of sovereignty, but instead fell under the umbrella of administrative acts, thus giving the court the right to address the suit in accordance with the Constitution.

The court also confirmed that anything related to national territory and rigid sovereignty over this territory is the business of every Egyptian citizen. The people alone are “the owners of sovereignty; they practice and protect it and are the source of authority,” the judge said in his ruling. He said ceding land is not a matter that can be classified under the umbrella of administrative acts or acts of sovereignty for the sake of distancing it from judicial oversight.

The court ruled that article 151 of the Constitution also bans the executive branch from concluding international treaties – including signing them – if these treaties violate the Constitution or result in the relinquishment of any part of state territory. The court’s ruling stated that the prohibition in this article is absolute, with no room for evading it under the pretense of circumstances.

The defense also argued that the agreement between Egypt and Saudi Arabia was an international treaty signed by international parties brought together on the premise that they are international legal personalities. The court ruling, however, confirmed that for international treaties to be valid, they must be concluded in accordance with the state’s domestic legal rulings, beginning with the Constitution. This principal was established by the Vienna Convention on the Law of Treaties, which Egypt signed in 1981, and which allows treaty parties to annul a treaty if it clearly violates domestic laws.

The court pointed out that the government’s representatives failed to present the text of the agreement with Saudi Arabia during the case. The state’s lawyer was also fined twice for failing to present documents in support of the defense’s argument. The court criticized government representatives for hiding behind the argument of its lack of jurisdiction over the case, and considered such a matter inappropriate for the government, whose goal is to ensure public interest in all its actions.

What was the basis for the court’s ruling?

In its reasoning, the court explained that it based its ruling on documents and facts presented by Ali and his team of lawyers, in addition to what it described as historical facts that confirm the Egyptian state’s right to sovereignty over the Tiran and Sanafir islands. Examples of these include:

Based on these historical facts and legal documents, the court said it determined that the Egyptian state in actuality has the full, unrivaled right to sovereignty over the Tiran and Sanafir islands. The court also prohibited their relinquishment, declaring that the Egyptian government’s representative’s signing of the maritime border agreement with Saudi Arabia was a grave breach of the Constitution.

How has the government responded to the ruling?

Hours after the ruling was announced, the State Lawsuits Authority, appealed the verdict. The Supreme Administrative Court has scheduled the appeal for June 26. The Cabinet, which continued to refuse the court’s jurisdiction over the matter, however also said it would provide documents, among them maps and treaties, that confirm Saudi sovereignty of the islands.

Mohamed Elgohari is an assistant director at the Atlantic Council’s Rafik Hariri Center for the Middle East, and the editor of its Arabic website. Follow him @ mohamedalgohri

Image: Lawyer and former presidential candidate Khaled Ali (2nd L) leaves a hearing for a lawsuit filed against the government to stop the transfer of two Red Sea islands to Saudi Arabia, at the State Court in Cairo, Egypt May 17, 2016. (Amr Abdallah Dalsh/Reuters)