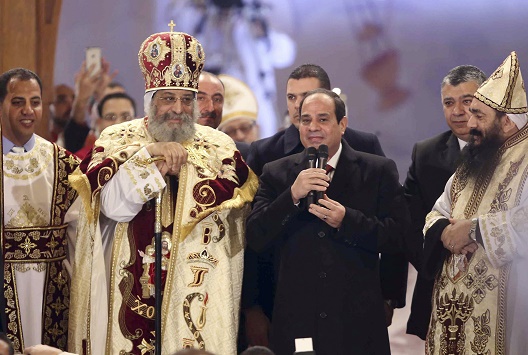 What is the value of a presidential visit to the papal cathedral for a seventy-year-old Copt driven from his village? What good are warm relations between Abdel Fattah al-Sisi and Pope Tawadros if relations remain tense between Youssef Tawfiq and his Muslim neighbors? A new report by the Egyptian Initiative for Personal Rights (EIPR) says this problem runs far deeper than Sisi and Tawfiq. Over the past four years, twenty-three other Copts have been forcibly displaced from their homes out of forty-five cases examined by EIPR where community justice—rather than legal procedure—has mediated sectarian clashes.

In Jordan, far from the village of Kafr Darwish in Beni Suef, 70 miles south of Cairo, Tawfiq’s son Ayman was alleged to have shared insulting pictures of Muhammad on his Facebook page. Upon hearing the rumor, which Ayman denies, a mob gathered and set fire to his family’s homes and fields. An overwhelmed mayor and village officials, with police present, conducted what is known as a ‘customary reconciliation session’ (CRS). Meant to subdue tensions and restore order, village elders debated a just solution.

Ayman’s father, mother, and sixteen other relatives were ordered to leave town.

“Customary reconciliation sessions are said to stop sectarian tension, but our analysis shows that they only serve to ignore it,” said Amr Abdel Rahman, head of the civil liberties unit at EIPR. Report author Ishak Ibrahim was even more explicit. “If people reject the ruling it can result in more sectarian conflict, but it helps the aggressors escape the consequences of their actions,” he said.

As EIPR details in its forty-five cases, rarely are individuals from the mob arrested. When they are, many times the reconciliation agreement stipulates the relinquishing of judicial procedure. All of this is contrary to the law. Article 63 of the Egyptian constitution forbids the forced displacement of any citizen. Article 95 insists all judicial rulings must be personal, not collective. While Article 185 of the penal code allows a victim to waive prosecution in certain circumstances, these do not include looting, arson, or intimidation.

The EIPR report shows two primary controversies: The first is the free practice of religious ritual, including the building, expansion, and renovation of churches. At 31 percent, it is only slightly more frequent than clashes involving romantic relationships between a Muslim and a Christian, at 29 percent. Land and property disputes constitute 16 percent and expressing opinions on religious matters make up 8 percent, as in the case of Ayman.

At times sectarianism is at the heart of the problem; at times normal community problems escalate along sectarian lines. But among the most controversial aspects of CRS is the presence of police.

“Traditional sessions do not conflict with the law at all, they have to do with the prevention of bloody conflict,” former security director for Minya Sayyid Nour el-Din, told OnTV, defending police practice. “The security presence is to protect the sessions, not to come up with their solution.” But in some cases EIPR studied, the police participated in issuing decisions. In others they randomly arrested people on both sides to exert pressure to accept the CRS process.

EIPR does not condemn CRS entirely, as in non-sectarian cases it has the potential to reach a consensual opinion and avoid lengthy legal processes. For Youssef Sidhom, editor-in-chief of the Coptic newspaper Watani which helped break the story in Kafr Darwish, reaching a fair outcome in sectarian conflict is rare. “Usually it is humiliating, as it forces the will of the stronger party upon the weaker,” he said. “When security officials let this be done under their eyes and blessing, it is a very grave mistake.”

At stake is the sovereignty of the state, he said. But perhaps it is getting better? The report said there were twenty-one cases under transitional military governance after the fall of Mubarak, at a rate of one per month. President Morsi’s year in office witnessed fifteen, at a rate of 1.25 per month. Under Mansour and Sisi, only nine cases were reported over eighteen months through the end of 2014, when the reporting concludes.

Then again, Ibrahim said there have been six cases in the first half of 2015. The problem is not going away.

After a media outcry, the governor of Beni Suef intervened and security returned Youssef Tawfiq and his family to their homes in Kafr Darwish. Sidhom believes President Sisi acted quietly behind the scenes. “I don’t consider this a happy ending as the law is still not enforced,” he said, noting that to his knowledge, none of the mob are in prison nor have any in the police force been disciplined. “You cannot live under the mercy of the president rather than the rule of the law.”

As with much else in today’s Egypt, the issue falls to Sisi. He has done much to try to change a culture—visiting the cathedral and calling for the reform of religious discourse. But will he follow through to change a reality? Will he be able?

Egyptians have respect for the strong leader. They have less respect for those who ‘talk.’ If Sisi sets the right tone—backed by holding accountable those responsible for undermining state sovereignty—others will walk in step with him and help transform the culture over the long run. But not if he is weak. The president has shown a strong hand in asserting control over the Egyptian state—despite international criticism over violations of human rights. Similarly, if Sisi is intent on a new relationship with Egypt’s religious minority (as implied by his rhetoric and meetings with Pope Tawadros), he will have to face possible domestic and institutional criticism to assert it further by arresting aggressors and disciplining enablers.

“We put responsibility on the government,” said Ibrahim. “It is the one tasked to protect citizens and their rights.”

Jayson Casper writes regularly on Egyptian politics, religion, and culture at A Sense of Belonging. Follow him on Twitter at @jnjcasper.