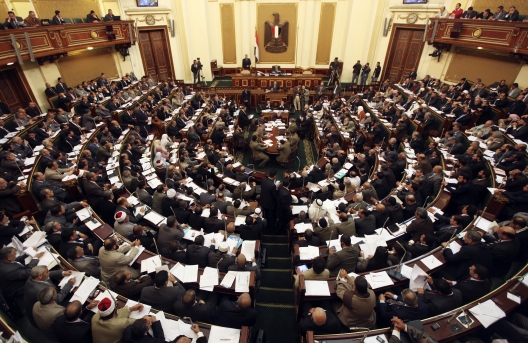 With the High Elections Commission (HEC) closing the door to candidate registration, over 5,000 Egyptians have applied to run in the upcoming parliamentary elections slated for March 22. 3,514 applied to run as independent candidates, while 1,539 applied to run on a party list. Of the 5,000 applicants, only 212 are women.

As the date nears, at least nine coalitions are gearing up to run in the elections. Parties continue to change allegiances, moving from one coalition to another, choosing to run alone, or even deciding to boycott the elections.

The following coalitions will be competing in the elections. To view how parties have switched from one coalition to another, click here.

EGYPTIAN FRONT COALITION (TAHALUF AL-GABHA AL-MASREYA)
The Egyptian Front Coalition was formed in August 2014, with the alliance announcing it will operate under collective leadership. Several of the parties in the alliance have strong ties to the Mubarak regime, including Ahmed Shafiq, Mubarak’s last Prime Minister, former Interior Minister Ahmed Gamal al-Din, and Nabil Dibis, a businessman and former member of the now-defunct National Democratic Party.

The Tagammu, Ghad, and Conference parties withdrew from the Egyptian Front coalition in December. The alliance was also coordinating with Kamal al-Ganzouri to place at least twenty public figures on his list, before it collapsed. The Egyptian Front is currently in negotiations with the Wafd Party and the For the Love of Egypt Alliance.

FOR THE LOVE OF EGYPT (FI HOB MISR)
For the Love of Egypt (FLE) is led by former army official Sameh Seif al-Yazal. Yazal served both in the military and general intelligence services.

The formation of the FLE alliance was unexpected, and the group has been accused of acting as a replacement for Ganzouri’s list. Among the parties that expressed reservations over the FLE list were the Wafd Party and the Geel Party, which belongs to the Egyptian Front.  The individual members of the alliance are said to have been selected by Yazal.

Conflicting reports emerged this week on whether or not the Conference Party, founded by Amr Moussa, has joined the For the Love of Egypt list.

The FLE alliance also has many prominent names running on its list, among them:

INDEPENDENT CURRENT COALITION  (TAYYAR AL ISTIQLAL)
The pro-Sisi coalition was formed by the Independence Current, a party formed in 2012 as an opposition alliance to the then-ruling Mohamed Morsi. The coalition came together again in June 2014. It was also backing Ganzouri’s list before its collapse.

The Independence Current is headed by Judge Ahmed Fadali. He was accused of playing a role in the attack on anti-Mubarak protesters in 2011, when thugs descended on the square riding camels and horses, in what has now become known as the Camel Battle.

Kamal al-Helbawy, a former member of the Muslim Brotherhood’s Guidance Bureau, is also involved in the coalition. Helbawy left the group in 2011 in protest against its decision to field a presidential candidate.

The Independence Current is reported to include a total of thirty-six parties and forty-two coalitions. Its members will run on four lists, with another 300 running as independent candidates.

Among its members are:

After the collapse of Amr Moussa’s alliance, spokesperson Abdel Nabi Abdel Sattar called for Moussa to lead the coalition

EGYPTIAN WAFD ALLIANCE (AL WAFD AL-MASRY)
The Egyptian Wafd Alliance has seen much upheaval in the past few months. Led by the Wafd Party, several parties have withdrawn from the coalition or shied away from joining, among them the Tagammu Party, and the Egyptian Social Democratic Party. Most recently in February, however, the Ghad Party, the Adl Party, and the Conference Party all came together to join the Wafd Party for the upcoming elections. Within two weeks of joining the alliance, the Adl Party announced its intention to boycott the elections.

The future of the Wafd alliance remains uncertain, with reports emerging that its leading party, the Wafd, plans to join the For the Love of Egypt list. The Egyptian Front has also reportedly joined forces with the Egyptian Wafd Alliance and the Conference Party for a joint electoral list in Upper Egypt.

EGYPT’S RENAISSANCE (SAHWAT MISR)
Sometimes also referred to as Egypt’s Reawakening, the alliance was founded by Abdel Gelil Moustafa, a former member of the constituent assembly tasked with drafting Egypt’s constitution. The coalition has explicitly stated that it excludes all members of the NDP and the Muslim Brotherhood.

The coalition also includes many prominent figures, among them:

SOCIAL JUSTICE COALITION (TAHALUF AL-ADALA AL IGTIMA’EYA)
The Leftist/Nasserist coalition was formed in December, 2014, and is made up of over twenty parties and movements. The alliance’s platform includes abolishing the protest law, rejecting US aid to Egypt, and conducting speedy corruption trials.

Among its prominent members are:

The Egyptian Communist Party, the Equality and Development Party and the Kenana Party withdrew from the alliance, accusing the senior coordinator of the alliance, Gamal Zahran, of  dictating rules from above.

Among the fifty-eight parties and movements on the list are:

Many of its members are former ministers as well as retired police and military generals. The alliance members will run as independents. Prominent members include:

NIDAA MISR  (CALL OF EGYPT)
The Nidaa Misr coalition has taken a page from Tunisia, emulating the Nidaa Tounes party which successfully contested the 2014 parliamentary elections. The spokesperson for Nidaa Misr is Tarek Zeidan, the head of the Egyptian Revolution Party.

Nidaa Misr welcomed Russian President Vladimir Putin’s visit to Egypt, saying it was a step in the right direction.

Members of the coalition include:

25/30 ALLIANCE
The 25-30 Alliance is a coalition of independent candidates including Abdel Hakim Gamal Abdel Nasser, Shahenda Maqled, Abdel Halim Qandil. While it had been a part of the Independent Current, the group announced that it will run as independents, giving individual members the choice to participate in party lists.

DEMOCRATIC CURRENT ALLIANCE (AL TAYYAR AL-DIMOQRATI)
The Democratic Current Alliance originally consisted of eight parties. It has since fallen apart with all of its parties boycotting with the exception of one party – the Karama Party, which will run only for individual seats. The Adl Party joined the Wafd Alliance for less than two weeks before announcing its decision to boycott.

The Egyptian Wafd Alliance and the Democratic Current had also been discussing a merger, but it fell through.

PROMINENT INDEPENDENTS
Among the prominent independent names who have applied to run in the upcoming elections are Mubarak-era steel tycoon Ahmed Ezz, and his wife Shahinaz Al Nagar. Ezz is a former ruling member of the NDP and was convicted of money laundering and was sentenced to seven years. His conviction was overturned on appeal. He was also accused of orchestrating the rigging of the 2010 parliamentary elections in which the NDP won 99 percent of the seats. Other former NDP members who have applied to run include businessman Talaat al-Seweidy and Magdy Ashour a former NDP MP for Zagazig.

The Salafist Nour Party has also repeatedly stated it will not join an alliance. Led by Younes Makhioun, the party will run its candidates as independents. It expects to win 30 percent of the seats. 60 percent of the party’s ex-deputies will be excluded from running in the elections. In the 2012 parliamentary elections, the Nour Party won almost 30 percent of the seats, the second largest number of seats after the Muslim Brotherhood. The party’s decision to support the June 30 protests and the ouster of former president Mohamed Morsi, has led to speculation over whether or not the party has alienated its hardline supporters.

BOYCOTTERS
To date, a total of ten parties have announced that they are boycotting the elections. These include the Islamist Wasat, Watan, and Building and Development parties. Of these three parties, the Building and Development Party, the political arm of al-Jama’a al-Islamiya, is the only Islamist party actively boycotting that still belongs to the Muslim Brotherhood-led, National Alliance to Support Legitimacy. The Wasat and Watan parties previously withdrew from the alliance.

Of the secular parties, all once belonged to the Democratic Current Alliance: the Dostour Party, Socialist Popular Alliance Party, the Popular Current, the Freedom Egypt Party, the Bread and Freedom Party, and the Adl Party.