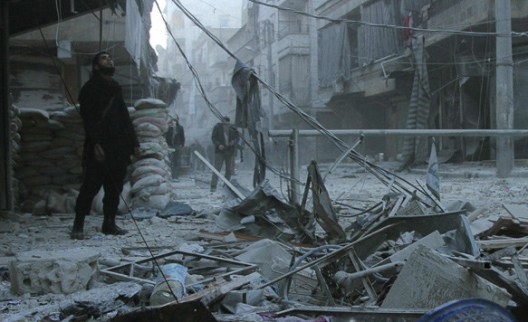 As Syria peace talks deadlock at Geneva, forces loyal to Syrian dictator Bashar al-Assad have unleashed a potentially decisive military offensive that may eliminate the possibility of a political settlement. Death tolls have risen to their highest levels yet since Geneva II talks began in late January, according to the Syrian Observatory for Human Rights. The primary culprits are regime airstrikes with barrel bombs, or explosives-packed containers that rain shrapnel on their surroundings.

If Assad’s vicious air campaign is allowed to continue, the outright defeat of Syrian rebel forces in their main stronghold of Aleppo is distinctly possible. Such a defeat would prompt an international security crisis. A massive wave of refugees would shake the stability of neighboring states, and those left behind would face the threat of Srebrenica-scale massacres. A new launching zone for transnational terrorists would emerge, without any local ground forces in Syria willing or able to fight them.

The Syrian American Council arrived at these dire conclusions only after undertaking a detailed study of rebel supply lines, barrel bombing locations, and transnational terrorist influence in Aleppo. The province is Syria’s most populous and its main city located a mere thirty miles from the Turkish border. Aleppo’s deep relevance to both the Syria conflict and the wider region is undeniable. If Aleppo falls, the regime will achieve dominance over the opposition, and peace talks will be replaced with surrender terms.

Before the regime’s Aleppo offensive, five border crossings in the province served as rebel supply lines: Jarablus to the northeast of Aleppo City; Bab Salam to the north; Atmeh and Bab Hawa to the west; and Darkoush to the southwest. The two supply lines to Jarablus, Aleppo Airport Road and Bab Road, are especially critical because they constitute the only gateways to eastern Syria from Aleppo City. Both have been captured by Assad forces with the help of barrel bombings.

Aleppo Airport Road fell to regime forces in November, after an intensive barrel bomb assault on nearby Safira that virtually emptied the 100,000-person town of its population. From there, the regime began barrel-bombing Aleppo’s urban areas. Our mapping of these barrel bombings shows that in the first three weeks of bombardments (December 15, 2013-January 4, 2014), attacks were heaviest in areas near the Bab Road. On January 11, regime forces severed Bab Road by capturing Naqqarin village.

Having cut rebels’ eastern supply lines, regime forces are now pushing into Aleppo along the Airport Road. According to our mappings, the unprecedentedly fierce barrel bombings on Aleppo since January 19 have focused on six neighborhoods near the Airport Road: Maysar, Marjeh, Shaar, Salhin, Muadi and Qadi Askar. On January 28, regime forces captured Aleppo’s Karm al-Qusr neighborhood, marking their first-ever capture of an Aleppo neighborhood from rebel forces.

Assad’s forces can only contemplate a major Aleppo offensive because they have all but secured the capital Damascus through bogus “ceasefires” with strategic rebel suburbs around Damascus. The regime first starves and terrorizes these suburbs through months of crippling sieges and bombardments. Then, as food supplies run out, the regime offers food access if rebels cease attacking regime positions, fly the regime’s flag, and allow government officials to enter with state television cameras rolling. Finally, the population prevails upon rebel fighters to accept the deal, and a small amount of food enters the suburb.

These arrangements are more akin to starvation-induced surrender than ceasefires, because the regime can reapply the siege at any time to force further concessions. In the Mo’adamiya suburb, regime forces initially offered food access if rebels ceased their attacks and flew the Assad flag. By the end of the process, rebels had been coerced into leaving urban centers and relinquishing their heavy weapons. In Yarmouk Palestinian Refugee Camp, at least eighteen people have starved since its so-called ceasefire went into effect. The Daraya suburb, located between Mo’adamiya and Yarmouk, having observed the fate of its neighbors, declined a ceasefire. It has since suffered an average of twenty barrel bombs a day.

Why should Americans care about events in Aleppo and around Damascus? Isn’t this just a Syrian problem, and don’t they have enough of their own problems?

The situation in Aleppo is a problem for the United States, or will be very soon unless things change. Director of National Intelligence James Clapper recently worried that Syria is becoming “a new FATA” (Federally Administered Tribal Areas of Pakistan), from which extremists might launch “terrorist attacks emanating from Syria to the West.” Our findings suggest that the emergence of a new FATA is already at hand.

Many commentators developed a tendency to lump together all Syrian Islamist rebel brigades as “Islamic extremists.” From the perspective of US national security, this is a mistake. The Islamic State in Iraq and Sham (ISIS), formerly al-Qaeda in Iraq, is the only fighting group in Syria now conducting terrorist operations in multiple states. It formed for the explicit purpose of transnationalizing al-Qaeda operations in Iraq, and was quickly denounced by other Syrian Islamist rebel factions for this reason. In other words, ISIS is a transnational terror threat in a way that other fighting groups in Syria are not.

After its establishment in April 2013, ISIS quickly gained control of a wide arc of territory spanning the majority of the Turkish-Syrian border. First, it seized the Raqqah province just east of Aleppo, after a bloodless coup against rebel forces stationed at Raqqah in early June. Then it moved on to the Aleppo province, capturing most major towns along rebel supply lines by December. This meant ISIS could encroach on Aleppo itself, the ultimate prize, by controlling the flow of goods and people. Its establishment of “a new FATA” on Syrian territory was within reach.

In early January, the Syrian opposition launched what some activists have called a “second revolution” against ISIS. Massive demonstrations erupted across opposition areas, in protest of ISIS abuses that have included assassinating pro-democracy commanders and kidnapping prominent activists. The Mujahideen Army, a new coalition of moderate rebel brigades, formed with the pledge to “fight ISIS, which has violated the rule of God, until it announces its dissolution.” Another new moderate coalition—the Syrian Revolutionary Front, led by Jamal Ma’arouf and affiliated with the US-endorsed Free Syrian Army—soon declared war on ISIS as well. Within a week, rebel fighters had routed ISIS from most of its territory, and were mounting a siege on ISIS headquarters in Raqqah.

The Assad regime, which has killed over 150,000 Syrians under the guise of fighting terror, made no effort to facilitate the fight against ISIS. Instead, Assad barrel bombings on Aleppo now threaten the very existence of rebel brigades currently fighting ISIS. If the regime succeeds in eliminating these brigades, no local partners will be left to prevent the emergence of a new FATA in Syria.

While isolationism might be tempting to the United States at the present moment, our findings on Aleppo show that this is not a real option for the Syria conflict. The United States can act to support moderate Syrian rebels now, with a smaller or even covert intervention that tips the balance against Assad and ISIS forces, or we can wait for Syrian moderates to be exterminated. At that point, the world community would be forced to remove ISIS itself or suffer the consequences of a transnational terror launch pad.

Image: Aleppo after a barrel bomb attack on one of its residential areas. (Photo: Freedom House/Flickr)