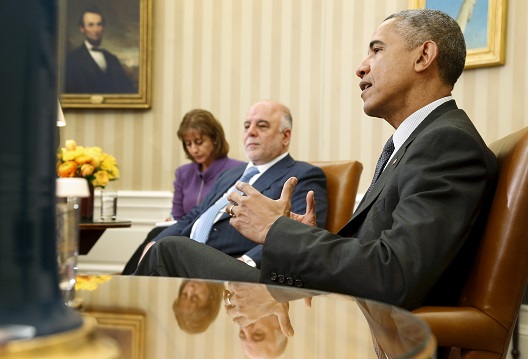 During his first visit to the White House as the Prime Minister of Iraq, Haider al-Abadi surprised Washington when he criticized the Saudi Arabian-led air strikes against Houthi rebels in Yemen. “The dangerous thing is we don’t know what the Saudis want to do after this,” Mr. Abadi said. “Is Iraq within their radar? That’s very, very dangerous. The idea that you intervene in another state unprovoked just for regional ambition is wrong. Saddam has done it before. See what it has done to the country.” In addition, he mentioned that senior US officials he met with held the same negative sentiment about mission.

This forced the Obama administration to clarify its position to its Sunni Arab allies: “The president did not criticize Saudi or GCC [Gulf Cooperation Council] actions in Yemen,” said a National Security Council spokesman. “We firmly support” the mission, “which is why we have been providing … intelligence and logistical support” for the air campaign in Yemen.

Nevertheless, why did the Iraqi premier, amid his first official visit to Washington through which he aimed to bolster his legitimacy and gain material support from the White House, decide to criticize Saudi Arabia’s policy in its own backyard—the same policy to which the Obama administration had already committed and was actively supporting in Yemen? Shortly after Abadi’s comments, Saudi Ambassador to the United States Adel al-Jubeir responded in a press conference, stating that the Iraqi prime minister’s remarks served “no logic” and that the Iraqis should focus on “what’s going on in their own country.”

Abadi’s statement undermined his own goals for coming to Washington, including efforts to improve relations between Saudi Arabia and Iraq. As the Washington Post reported: “The three-way exchange threatened to overshadow Abadi’s efforts, on his first official visit to this country, to enhance his image as the leader who can both defeat the Islamic State [ISIS or ISIL] and bring inclusive governance to Iraq. It also threatened to dilute the Saudi narrative that its Yemen operation was taken only reluctantly, to restore stability in a neighboring state.”

Indeed, Abadi received a phone call on March 22 from Saudi King Salman bin Abdul Aziz to discuss their shared interests in the war against ISIS. The Iraqi leader was also invited to visit Riyadh, which the Western press characterized as a major sign of the thawing of bilateral relations between the two countries.

However, this invitation was not the first time that many thought relations between Iraq and Saudi Arabia had turned a corner. Back in 2012, when Nouri al-Maliki was prime minister of Iraq, Riyadh had appointed Fahd al-Zaid, their ambassador to Jordan, to serve as the “nonresident” ambassador to Iraq. The move had signaled a step toward restoring diplomatic relations, with Zaid taking up the post as the first Saudi ambassador to the Iraq since Saddam Hussein invaded Kuwait in 1990. Baghdad and Riyadh had also discussed ways to cooperate on combatting terrorism and the exchange of prisoners back then.

Abadi later watered down his criticism and restated his interest in Saudi Arabia opening an embassy in Baghdad, but there are several possible reasons that could explain his remarks:

One possibility is that Abadi felt the need to counter the narrative in Washington about Saudi Arabia’s role in the region, particularly with the latest intervention in Yemen. Like his predecessor and many Shia Arabs in Iraq, there is a general suspicion of Saudi Arabia and complaints that Riyadh’s foreign policy has exacerbated sectarian tensions in the region. Indeed, foreign meddling by the Saudis has long been a complaint many Shia Iraqi officials have made to Washington. In 2012, for example, Saudi Arabia (along with Turkey) had reportedly attempted to oust Maliki from the premiership by helping to organize Iraqi parties to vote on a no-confidence measure in parliament, but Iran succeeded in scuttling the measure.

Despite signs of improving relations, Iraq and Saudi Arabia certainly still view each other with deep suspicion; that sentiment is unlikely to disappear anytime soon. Since the Arab upheavals began in 2011, Riyadh has become much more of an interventionist power in the region, whether in propping up regimes or attempting to overthrow those in power. This would naturally concern any Shia leader in Iraq, simply based on sectarian dynamics in the region.

A second possibility is that Abadi, while holding strong reservations about the Saudi-led air campaign in Yemen, felt it was not controversial to share his views given that they aligned with members of the Obama administration. While the White House reaffirmed its support for the Saudi-led intervention, it is not impossible that through the course of Abadi’s meetings with senior US officials, that skepticism and qualms could have been expressed to the prime minister—thus reaffirming his own position on the matter.

A final possibility could be that Abadi was delivering a message on behalf of Iran. While Obama hailed his visitor as a “strong partner,” the reality inside Iraq is that the prime minister remains a weak player on the political and security landscape, still in the process of consolidating his power. Indeed, despite being the head of government, Abadi does not have a monopoly on executive authority, and depends on various actors for his political survival—especially Iran. Abadi’s comments may also be conceived as a costly signal, whereby he demonstrates that Baghdad and Tehran share important interests and does not intend to sideline the latter’s concerns in the region in hopes of establishing better relations with Washington.

Despite how positively Washington thinks of its new ally in Baghdad when comparing him to his predecessor, it would be a mistake to believe that Abadi would reorient Iraq away from Iran and closer to the United States and the Sunni Arab states as the competition over the regional balance of power intensifies. Thus, despite some critical shared interests, there are limitations to the depth of cooperation between Washington and Baghdad.