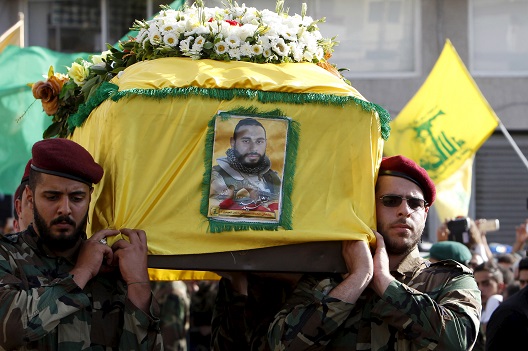 Earlier this month, Iran’s Revolutionary Guard Corps (ICRG) Quds Force chief Qassem Soleimani made a surprise visit to Syria near the frontlines outside Latakia, where he vowed that upcoming developments in Syria will soon “surprise” the world. So far, the world has not seen any surprises. On the contrary, the opposition seems to have gained more ground with each day.

The Iranian regime now faces a number of crises. In addition to last-minute challenges before signing the final nuclear deal with the P5+1 by June 30 and its struggling economy, Iran must contend with a unified Arab front in both Yemen and Syria. Given the inability to send more troops to Syria due to financial limitations, Iran has chosen to sacrifice more of Hezbollah’s resources.

Iran’s priority now centers on limiting its losses in Syria and protecting the corridor that links the coastal region to the anti-Lebanon mountain chain—i.e., to Hezbollah. To do so, the IRCG has pulled its military units and allied Shia militias from Syria’s north, positioning them along the Alawite coast, Damascus, and the southwest to back Hezbollah forces in Qalamoun. Controlling these areas would secure the strategic corridor that Iran needs to protect its interests in Syria. Everything else can go to rebels—or even the Islamic State (ISIS or ISIL).

Qalamoun’s link to Damascus, Homs, and the Alawite enclave along the coast makes it a strategic prize. It also gives Hezbollah safe access to the Golan Heights, allowing the group to encircle Israel and Iran to use it as geopolitical leverage. Yet Iran’s Plan B faces the challenge of recent rebel gains in southern Syria and mounting Hezbollah casualties in Qalamoun.

One week after Soleimani’s pledge, the surprise came from the opposite side, when the Free Syrian Army’s Southern Front captured the base of the 52nd Brigade in Harak, Deraa Province, hours after the attack was first announced. As the second largest base in southern Syria, it occupies a strategically significant position between the Deraa and Suweida provinces. The capture of this base breaks the regime’s first ring of defense around Damascus. Syrian rebels have also scored gains in other parts of Syria, making Soleimani’s vows sound like empty rhetoric.

While these recent opposition victories will not win the war against the Assad regime, they do impose a new reality on the ground. In order to secure this corridor, Iran would have to impose a kind of buffer zone, which would not come easily.

When the Army of Conquest, the Qalamoun rebel group fighting Hezbollah, reclaimed Idlib and Jisr al-Shougour earlier this year, it opened the Alawite coast to vulnerabilities. Damascus is another story. Whoever takes Damascus will have an upper hand in Syria. Today, the Southern Front nears the city, determined to go further to take Izraa and Deraa city—two strategic points held by the regime. It will be an easy battle, but neither will it be so for Iran and its militias.

As Hezbollah loses more fighters in Qalamoun with each passing day, it increasingly struggles to replace them. Despite recent statements by the party’s officials, reassuring its supporters on victories in Qalamoun, nothing is yet certain. Opposition sources in Qalamoun told the Lebanese media that despite its occasional victories, Hezbollah cannot maintain its hold against Nusra Front forces. If Iran does not guarantee a win in Qalamoun, its loss would threaten access to the Golan along with the link to the coast. The Army of Conquest, the Nusra Front, and other factions—realizing the stakes—have doubled-down on this battle, making it that much harder on Iran and its allies.

Meanwhile, Hezbollah is bleeding—in both Lebanon and Syria. The Lebanese Shia community is not pleased with Hezbollah’s results in Syria. It has produced too many “martyrs” without any victory. Assad is losing ground, the Shia are more isolated than ever, and funerals have become a daily occurence. The longer this trend continues, the less likely that Lebanese Shia families will send their young men to fight in Syria, forcing Iran to depend more on untrained Shia Afghans and Pakistanis.

All signs indicate that, even if Iran maintains this corridor, it will remain vulnerable to opposition factions and Islamist rebels from all sides. Nonetheless, Iran decided long ago that only a military solution in Syria would protect its interests. Given the amount of blood, money, and political capital already expended, Iran will not change its calculations easily. At best, it might limit its scope to securing the corridor, but will not likely let go.

While the West insists that only a political solution will solve Syria’s ills, Iran has stayed the military course. The United States may soon sign a nuclear deal with Iran, eventually leading to relaxed sanctions that would allow Iran to boost its vulnerable military in Syria. Any talk of a political solution that does not acknowledge this reality is doomed to failure, just as any talk of a solution that does not acknowledge regional concerns over Iranian hegemony will not work.

Iran may relinquish the parts of Syria outside this vital corridor, but there is no Plan C. If the Syrian people and their regional backers are not included and assured in any political agreement, no solution will work and the rebels will continue fighting with whatever weapons they can acquire until further notice. Unless the United States forces Iran to compromise on these local and regional concerns, Iran will keep pursuing Plan B, the opposition will keep fighting it, and Syria will continue to disintegrate into more chaos, dragging the region to more wars and instability.

Hanin Ghaddar is a Nonresident Fellow at the Rafik Hariri Center for the Middle East at the Atlantic Council and the Managing Editor of NOW. Follow her on Twitter @haningdr.

Image: Lebanon's Hezbollah members carry the coffin of Hezbollah fighter Adnan Siblini, who was killed while fighting against insurgents in the Qalamoun region, during his funeral in al-Ghaziyeh village, southern Lebanon May 26, 2015. (Reuters)