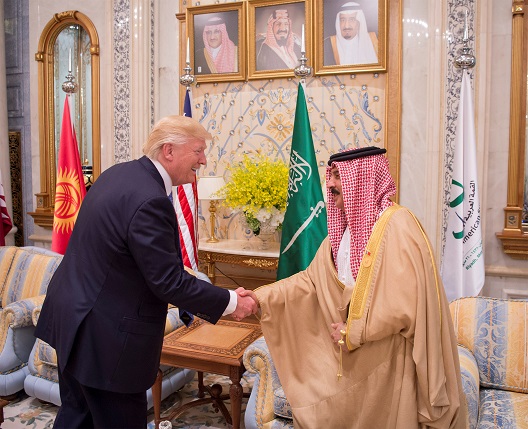 Following a long period of anticipation and repeated delays, US officials announced earlier this month that they will hold an economic workshop in Bahrain in late June as the first step in the administration’s road map for peace between Israel and Palestine. Bahrain’s hosting of the summit is a clear reflection of the trilateral partnership between Israel, the United States, and the Gulf that has been promoted by the Trump administration in the region. The event’s location and regional participation—in spite of the announced Palestinian boycott—moreover demonstrate that contemporary domestic and international geopolitical concerns outweigh a cursory commitment to the Palestinian cause.

Next month’s conference, which will take place in the capital of Manama, is aimed at offering a vision for investment in the West Bank, Gaza, and neighboring countries by focusing on four major components: infrastructure, industry, empowering and investing in people, and governance reforms to “develop the foundation for a prosperous future,” in the words of US President Donald Trump’s Middle East advisor and peace point man Jared Kushner. The conference’s economic enhancement envisioned by the United States, and indeed its host, is a manifestation of Trump’s impetus to showcase his fondness for business dealings in the international arena.

Economic development as a precursor to political change is not a new invention. In 1993, the late Israeli politician Shimon Peres outlined a peace plan in his book ‘The New Middle East’ based on market liberalization and regional cooperation. In this and other contexts, however, “an economic peace,” as Israel’s Finance Minister Moshe Kahlon termed it in 2008, coincided with a clear political process.

The motives driving Bahrain’s co-hosting of the international conference, entitled “Peace to Prosperity,” extend beyond a historical commitment to the Palestinian cause. Bahrain, like other Arab League Members, is a signatory of the 2002 Arab initiative, which dictates that “normal relations” and engagement with Israel are only to follow a comprehensive peace agreement that addresses complicated final status issues, such as the Palestinian refugee issues, the status of East Jerusalem, and the establishment of an independent Palestinian state.

The Gulf state’s recent reiteration of its commitment to these principles, however, has failed to satisfy the Palestinian leadership and the private sector investors the conference intends to attract. Palestinian businessmen and the Palestinian Authority alike have announced a boycott of the economic summit citing the absence of any substantive political plan that addresses Palestinian national interests.

Bahrain’s participation in the conference is indicative of lobbying attempts by the United States across the Arab world to ensure that a forthcoming peace plan become a “basis for discussions” rather than be rejected outright, as has been vowed by Palestinian President Mahmoud Abbas. In its lobbying efforts, the United States is able to leverage its strategic partnership with Bahrain, which is home to the US Navy’s Fifth Fleet and with its official designation as a “major non-NATO ally” enjoys the same legal classification as close allies like Australia and Israel. Bahrain’s decision to hold the summit suggests that the Gulf might be willing to subscribe to Trump’s vision of substantial Gulf investment in the Palestinian Territories as part of a future peace plan. In the months leading up to the announcement of the forthcoming economic summit, leaked documents demonstrated that as part of a future plan to establish an economically viable “New Palestine” within five years, Gulf states would be asked to contribute 70 percent of the $6 billion a year.

Manama’s willingness to partake in the US-sponsored conference also serves domestic and regional interests that center on countering Iranian ambitions in the Gulf and across the Middle East; and it is this specific geopolitical motive that provides further context to Israeli officials’ invitation to the summit. Recent Bahraini overtures to Israel, which follow unofficial contacts dating back to the mid-90s, include statements of support for Israel’s military actions in Syria against Shia strongholds.

Manama’s increased wariness of Iranian-sponsored military proliferation is shared with Saudi Arabia and the United States. Both Saudi Arabia and Bahrain were quick to welcome the Trump administration’s decision to designate Iran’s Revolutionary Guard Corps as a terrorist entity, a decision which according to Bahrain’s Foreign Ministry addressed “the dangerous role played by the IRGC as a destabilizing force and a main contributor to the spread of violence and terrorism across the Middle East and the entire world.” Bahrain, similarly to the United Arab Emirates and its de facto protectorate Saudi Arabia, also issued a statement of support following Trump’s decision to withdraw from the Joint Comprehensive Plan of Action, or the Iran nuclear deal, in May 2018.

The road to curbing Iranian ambitions, according to Bahrain, passes through Tel Aviv. Rabbi Marc Schneier, King Hamad’s interfaith adviser, quoted the king as saying in 2016 that “Our only hope for a strong, moderate Arab voice in the Gulf is a strong Israel.” In February of this year, during the Warsaw Conference, Bahrain’s Foreign Minister Khalid Bin Ahmed Al-Khalifa stated that confronting “the Iranian threat” was more important than dealing with the Israel-Palestine issue.

Manama’s motives for challenging what it terms Iran’s “hostile and terrorist activities” cannot be divorced from the nation’s internal politics. Despite Bahrain’s 70 percent Shia majority, the royal family and the remainder of the population are Sunni. This disparity has spawned sectarian tensions, fears of divergent alliances, and the consequential government-enforced repression tactics. The anti-government protests in Bahrain that were led by the Shia-dominant opposition during the Arab Spring of 2011 were violently crushed, including with the help of Saudi Arabian troops. In its yearly reports, the United States Commission on Interreligious Freedom has reported a continuous suppression of members of the Shia community, partly in response to perceived efforts by Iran to expand its influence in the country.

The location of the peace conference inevitably brings the ongoing GCC-crises to the fore. Although it is unclear to what extent GCC member states will offer economic incentives for a peace plan that the Palestinian leadership will reject, next month’s workshop will likely be used as an opportunity to gain further influence in the Palestinian realm. Qatar, which confirmed its attendance this week, has sought to boost its status in both the Gaza Strip and the West Bank in the midst of the ongoing economic and political boycott led by Saudi Arabia and its regional allies since mid-2017. Following humanitarian aid, salary, and fuel payments to Fatah’s rival Hamas in Gaza, Doha has recently balanced its support by sending $480m to the Palestinian Authority-led Fatah movement in the West Bank to address the existing fiscal distress in the Palestinian Territories. Qatar’s decision to directly fund the PA earlier this month follows earlier economic contributions made by Saudi Arabia. Despite reports of strained relations between Saudi Arabia and Ramallah over the former’s exertion of pressure to support a US peace vision, Riyad transferred a total of $100m in 2018 and 2019 to support the PA’s budget and, in the process, secure political influence while fueling division with Hamas, a Muslim Brotherhood-affiliated organization that was classified as a terrorist group by the kingdom in 2014.

Even if internal GCC politics, at times, overlap with specific Palestinian economic needs, the Palestinian Authority’s call to boycott the conference demonstrates the belief that the summit, in the words of Palestinian Information Minister Nabil Abu Rudeineh, is “futile.” Indeed, it is evident that while the conference might suit both Manama’s and its allies’ internal and external geopolitical designs, the absence of a willing Palestinian partner will hamper any durable economic development that hinges on a regional integration model.

Moreover, peace treaties, as those signed between Israel and Egypt and Jordan in prior decades have shown, do not necessarily follow—or, more fundamentally, yield—an upsurge in trade relations. In the face of political and social grievances laden with diverging historical narratives, any real ‘deal of the century’ will have to go beyond generous checks and investment pledges.

Grace Wermenbol specializes in the contemporary geopolitics of the broad Middle East and North Africa (MENA) region. She previously served as a lecturer on the Israeli-Palestinian conflict at the University of Oxford and held a research position at Oxford’s Department of Politics and International Relations. She holds a Masters and PhD from the University of Oxford, where her research focused on the Israeli-Palestinian conflict.