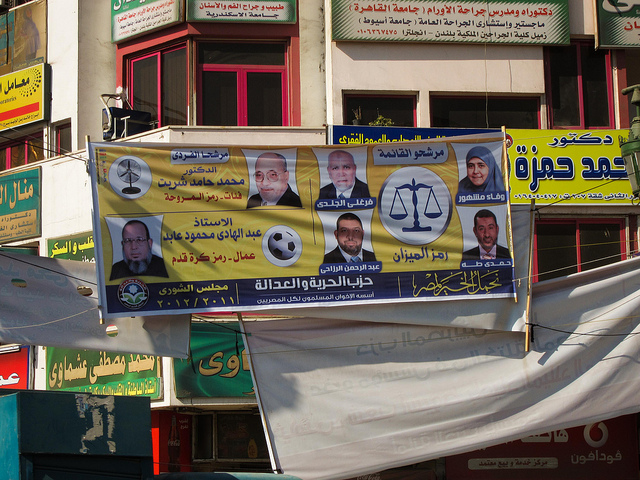 Let’s temporarily set aside positions held by the country’s opposition, the National Salvation Front (NSF), regarding parliamentary elections, and questions over whether or not to boycott due to the need to change unjust electoral rules. We will also ignore the position of the country’s far right religious factions for now, and their rejection of calls made to hold early presidential elections. We will ignore their false claims against advocates of early presidential elections, in an attempt to discredit them, describing their efforts as a coup against democracy, and that the Tamarod campaign pamphlets and signup sheets calling for early elections are headed straight for the garbage bin. Instead, today we will look to the Muslim Brotherhood and Freedom and Justice Party (FJP) position on parliamentary elections.

The official position of the Brotherhood and FJP is to conduct Parliamentary elections as quickly as possible, in order to build legitimate legislative institutions and complete Egypt’s transition to a stable democracy. In February, President Morsi announced the timeframe for House of Representative elections, after ratifying the country’s elections law. However the country’s Administrative Court halted these election procedures due to the fact that the Shura Council failed to refer the law back to the Supreme Constitutional Court (SCC). The SCC’s more recent court ruling on the elections and political participation laws has pushed back the date of parliamentary elections as far as 2014.

To explain why the electoral law issue remains unresolved, one must first recognize the FJP’s inability to administer the country’s legislative process in a way that is in line with the country’s current constitution. This is despite the fact that the FJP, which obtained a plurality in parliament, automatically obtained a majority after entering into an alliance with a number of other parties within the Shura Council. The fact that the FJP today cannot successfully push for the implementation of new parliamentary elections, is made even more remarkable when one considers how easily they were able to push forward the country’s unpopular constitution in 2012. It is hard to imagine then that the FJP is truly encountering difficulties in passing an elections law that the SCC will find acceptable. That being said, we need to consider an alternative to explain why the situation regarding Egypt’s parliamentary elections has remained pending, and why such elections have been pushed back to what will probably be as late as 2014.

The alternative that I see, without getting to deep into conspiracy theories or Machiavellian power politics, is that the Muslim Brotherhood and the FJP actually want, and are actively working to postpone these elections to a much later date. This is a political party that was able to so easily go from being a plurality to a majority within the Shura Council, to the point that they were able to pass several laws relating to economic and social policy. For example, they passed the Islamic Bonds or Sukuk Law, as well as passing a law granting the military powers of arrest in the lead up to the constitutional referendum, while the Shura Council is currently considering a law related to the Suez Canal Zone. However, the FJP cannot guarantee the same level of power they enjoy in the Shura Council in a new House of Representatives, regardless of whether or not the NSF takes part in elections.

Secondly, Egypt’s Shura Council currently possesses no regulatory authority over the country’s executive branch, in other words over the President, his government, and the bureaucracies and administrative agencies under his control. This grants the Muslim Brotherhood and the FJP even more power, as Egypt’s president comes from within their ranks, and can essentially pass and implement any law without being held accountable to or forced to be transparent in front of any kind of regulatory agency. Such a reality is especially enticing considering that Morsi is still in the early days of his presidency. He can, and will, seek to leverage, put pressure on and influence all of the central powers of the state. Has for example, the Presidency’s budget ever once been brought before the Shura Council?

The Brotherhood has also come to realize that their popularity has recently decreased due to the recent policies and practices of the president. The government now seeks to improve the quality of basic services provided to citizens (the state of Egypt’s Ministry of Supply, himself an FJP member, provides the best evidence of this, with the Minister working tirelessly to provide citizens with loaves of bread and butane pipes in an attempt to achieve tangible progress), in an attempt to woo low income citizens and obtain their support before the next round of elections. That being said, the Muslim Brotherhood and FJP have no interest in rushing the country’s parliamentary elections, which carry with them unforeseen consequences.

For these reasons the Brotherhood does not want to see parliamentary elections before 2014. This is also why Brotherhood and FJP representatives have been sent to the capitals of a number of western countries, who feel that they are affected by Egypt’s current state of affairs, providing them with excuses as to why elections have to be postponed, (some are actually quite funny, and rumour has it that FJP officials have told officials in Europe and the United States that the harvest season for cotton, approaching this fall, has forced them to push elections back to the end of this year or beginning of 2014).

For the above reasons, we will not be able to avoid this scenario, except by way of large-scale, popular pressure on the government pushing them to hold early presidential elections. That, or push the country’s Supreme Constitutional Court to dissolve the Shura Council, as was the case with the House of Representatives (People’s Council) in 2012. Perhaps then, the Muslim Brotherhood will be forced to consider alternatives as to how best to establish and improve the country’s legislative institutions.