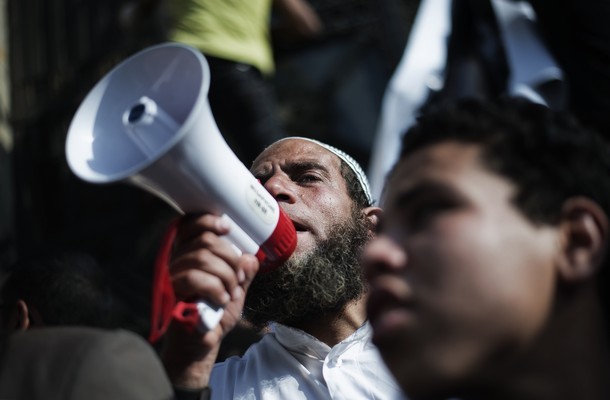 While the blood of innocent Egyptians is being shed on asphalt outside the Ministry of Defense in Abbassiya, Cairo is getting ready to meet its first fairly elected civilian president. This week in Abbasya, protesters — most of them supporters of disqualified Salafi presidential candidate Hazem Saleh Abu Ismael – clashed violently with armed thugs in a confrontation that left at least eleven people dead and hundreds more injured. Abu Ismael was eliminated from the presidential race a few weeks ago, after the Supreme Presidential Electoral Commission (SPEC) discovered that he had lied his mother’s American citizenship. Although the SPEC cited extensive evidence justifying the ruling, Ismael’s angry followers are still insisting continuing their campaign using the slogan, “lazem hazem,” meaning “Hazem is a Must” and staging massive protests in Tahrir and Abbasya ever since.

The Islamists – led by the Muslim Brotherhood and Salafi Nour Party – now hold the majority of seats in Egypt’s first post-revolutionary parliament. However, their disappointing performance as lawmakers and overall behavior since sweeping the elections has failed to live up to the high expectations of their supporters. Many disillusioned Egyptians who voted for Islamists’ are now experiencing buyer’s remorse.

Parliament’s failure to form a constituent assembly and embarrassing incidents including a nose job scandal surrounding a Salafi MP have undermined the credibility of the Islamist majority. Huge banners expressing this sentiment are starting to pop up around Cairo, bearing slogans such as “Where are your principles?” and describing Muslim Brothers as “Machiavellians,” while listing examples of their lies and misconduct. There is no doubt that Islamists, well aware of their deteriorating legitimacy, now fear that the disillusioned voters who regret supporting them in the parliamentary elections will not vote for Islamist presidential candidates.

The disappointing performance and deteriorating legitimacy of Islamists in recent weeks raises the question: Why did Egyptians vote for Islamists in the parliamentary elections and will they vote for an Islamist presidential candidate? I have posed this question to a broad range of Egyptians over the past week, including my colleagues at work, taxi drivers, friends, doormen, laborers, farmers, and even my mother. She voted for the Muslim Brotherhood in the parliamentary elections but now regrets this decision, and says she will not vote for an Islamist president.

The results of my informal opinion survey can summarized as follows:

Many Egyptians believe that “food politics” was the secret behind the Brotherhood’s parliamentary victory. In other words, Islamists persuaded voters by filling the gap left behind by the government’s failure to provide basic services. They launched free medical clinics and created food markets where they sold high quality food at discounted prices. The need for these vital services is perhaps even greater than it was at the time of the parliamentary elections, so many Egyptians believe that the Islamist presidential candidates will win significant support in rural and poor urban areas if they successfully deploy their patronage and charitable services in the coming weeks.

Others believe that the influence of mosques is the primary explanation for the political success of Islamists in the parliamentary elections. In Egypt, those who speak in the name of God are considered the most powerful. They can easily control the social mind-set and inspire people to make voting decisions motivated by religious piety. We witnessed this phenomenon in the March 19th referendum on constitutional amendments, voters based their decisions on the guidance of their religious leaders, whether Muslim or Christian.

In the parliamentary elections, Salafis successfully promoted their platform as the “way to heaven.” But despite the influence of mosques in the parliamentary elections, voters in the presidential election are far less likely to base their decisions on the guidance of their religious leaders. They have already made the mistake of trusting them twice (in the referendum and parliamentary elections), and have finally reached the disappointing conclusion that Islamists are only ordinary people who do not really posses a divine mandate to govern Egypt. In addition, the extremism and intolerance they have shown has alienated many of their former supporters. Rather than raising issues in parliamentary sessions that would help improve the lives of Egyptians, economically, socially, and politically, they have focused instead on promoting their conservative agenda with talk of banning pornography, legalizing Female Genital Mutilation (FGM), and removing English language from primary school curricula.

Yet another explanation for the parliamentary victory of Islamists – cited by many Egyptians including my own mother – is that voters supported Islamists because they believed that Islamist lawmakers would be less corrupt and self-serving than Mubarak’s regime. In other words, it is hard to believe that someone who strictly observes Islamist practices and moral teachings would lie or cheat or betray the public’s trust. Unfortunately, this is exactly what happened. Egyptians quickly discovered that Islamists are not as honest as they seem. They have lied, cheated, and stolen just as often as non-Islamist politicians.

Take, for example, the infamous story about the Salafi MP who had cosmetic surgery on his nose and claimed that he was assaulted to cover up the true nature of his bandages. Abu Ismael, the Salafi presidential candidate, blatantly lied to the SPEC when he denied his mother’s American citizenship. After arguing that Egypt does not need American aid, Sheikh Mohamed Hassan collected millions of pounds from supporters and then disappeared.  Members of the Muslim Brotherhood are guilty of plenty of lies themselves, most importantly, violating their promise not to field a presidential candidate. And their on-again off-again alliance with the SCAF – despite the military’s violence against protesters – is another example of the Brotherhood’s dubious moral compass. Growing recognition of the moral shortcomings of Islamists will significantly weaken their support in the presidential race as well as future elections.

Despite their deteriorating political capital, Islamists still have sufficient momentum to dominate the presidential election and probably two or three more parliamentary elections to come. However, the rate of support for Islamists will decrease year after year. It will take time for the public to mature politically to the point at which they are able to make informed voting decisions based on their interests rather than their immediate needs and emotions, but the tide is already turning against political Islam.

Dalia Ziada is the executive director of the Ibn Khaldun Center for Development Studies and the founding chairwoman of the al-Ghad Party’s Freedom and Rights Committee. She was a parliamentary candidate for the Adl Party in the 2011 People’s Assembly elections.