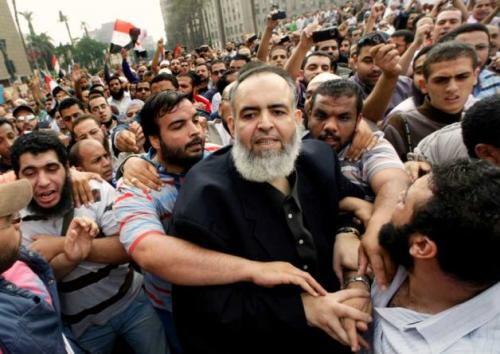 As the date of the announcement of the final slate of presidential candidates approaches on April 26, the level of political tension is rising to its peak. The announcement on April 26 will narrow the field of possible candidates competing to lead Egypt’s transition in the coming years. But the political instability that Egypt has experienced over the past year, as a result of the military’s mismanagement of the transitional period, has been intensified over the past week by signs that disenfranchised political forces could resort to violence, especially in light of the disqualification of the two leading Islamist candidates.

The next few days, until the announcement of the final list of candidates, will determine whether the presidential elections will pass peacefully or see violence. On April 14, the High Presidential Election Commission (HPEC) decided to disqualify 10 of the 23 presidential candidates for failing to meet the eligibility requirements, including three of the front-runners:  Omar Suleiman, Hosni Mubarak’s former vice president, viewed as the military’s favored candidate, was barred for failing to gather the required 30,000 signatures; 2) The Salafi candidate Hazem Saleh Abu Ismail was excluded because of his mother’s American citizenship; and 3) Khairat al-Shater, deputy head of the Muslim Brotherhood, was barred because of his prior criminal conviction.

These three candidates were leading in opinion polls, along with former Secretary General of the Arab League Amr Moussa, former Brotherhood member Abdel Moneim Aboul Fotouh, as well as the Brotherhood’s alternate candidate, Mohamed  Morsi.  All three of the disqualified candidates have appealed the decision, but if their case is unsuccessful, Moussa and Aboul Fotouh will emerge as the clear front-runners and biggest beneficiaries of the HPEC’s ruling.

The threat of possible violence began to emerge after Omar Suleiman announced his candidacy last week. His entry into the race represented a challenge to what is still called a revolution in Egypt and his success would deliver a serious blow to what remains of dreams for change. A number of revolutionary forces reached with calls for a second uprising, and some have been reluctant not deny their support for an armed uprising, including the left-leaning lawyer and presidential candidate Khaled Ali.

But with the potential exclusion of Omar Suleiman from the race, the potential for political instability – ranging from mass protests to violence – lies primarily with the Islamist movement, and supporters of the Salafi candidate Hazem Saleh Abu Ismail in particular, who have been campaigning for the past year.

This tendency toward violence was on display at the Friday, April 13 demonstration “to protect the revolution,” where crowds of Islamists filled Tahrir Square chanting slogans referring to jihad and martyrdom.  While it is unclear whether the Brotherhood’s intentions are peaceful, what worries a large number of Egyptians is that part of the Islamist movement, including many supporters of Abu Ismail, belonged to groups that participated in armed terrorism in the 1980s and 1990s, when these groups decided to renounce violence as a means of accessing political power.

Despite the fact that all Islamist movements have stood by their renunciation of violence, their ability to maintain peaceful political strategies could collapse if the military seeks to manipulate the electoral process. The violent tendencies of these movements could be inflamed by the recent release in Egypt of suspected terrorists affiliated with al-Qaeda, including Mohamed Shawky Islambouli, murderer of former president Anwar Sadat, and Mohamed Ibrahim Mekawy, known as “the sword of justice” and a prominent figure in al-Qaeda who had recently returned from Pakistan.

While the decision to exclude Omar Suleiman, Khairat al-Shater and Hazem Saleh Abu Ismail was welcomed with great satisfaction by proponents of a civil state, there has been an angry backlash within the Islamist movement, appears to be competing for power with the military.

Vowing to appeal the decision, Abu Ismail accused the military of “playing with fire,” while his supporters warned that “the country is on the threshold of a second revolution” and vowed not to leave Tahrir Square after a million-man demonstration planned for Friday, April 20.

For his part, Khairat al-Shater said, “We believed the military’s pledge to transfer power, but now it is clear that the remnants of the former regime are being enabled and are working to rig the elections … We must always remain in a revolutionary state and ready to return to the streets.”

The next few days leading up to the announcement of the final slate of candidates after consideration of the disqualified candidates’ appeals will be crucial in determining whether Egypt will continue on a peaceful path toward political progress, or whether the country will slide into violence.