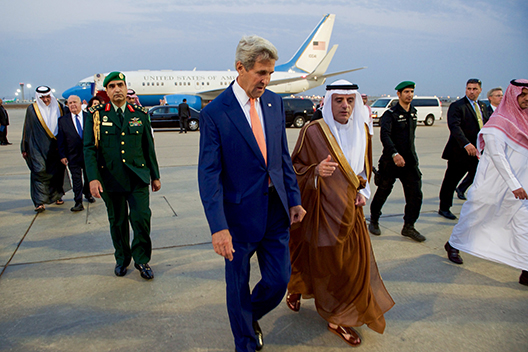 US Secretary of State John Kerry met two weeks ago with Gulf Cooperation Council representatives, officials from the United Kingdom, and the UN special envoy in Jeddah to discuss the war in Yemen and the desperate need to advance the peace talks. He pledged $189 million in humanitarian aid and called for a new peace initiative.  The talks are currently in recess, so increased attention from the White House might nudge the parties back to the table.

The UN Security Council also reiterated in early September its call for all parties to work with UN Special Envoy to Yemen Ismail Ould Cheikh Ahmed toward a cessation of hostilities and a long-term resolution to the conflict. Ahmed worked tirelessly to get the talks started in Kuwait in April, but they have produced little more than continued talking.  The parties recessed in early August. While neither side has stated that it does not intend to return to the table if and when new talks are scheduled, little progress is likely without either side willing to budge on key issues. Kerry’s visit to Riyadh likely intended to lend momentum to that process.

The key issues have not changed. President Abd Rabbo Mansour al-Hadi and his Saudi backers demand the full implementation of UN SC 2216, including the full disarming of the Houthis and their withdrawal from major cities including Taiz and Sanaa prior to the convening of a transitional governing process. The Houthis refuse this demand, recognizing that their arms and occupation of those regions give them bargaining power. Neither side, however, is willing to bargain. Kerry’s statements to the press on the timing of the Houthi disarming were more ambiguous, suggesting that they might do so in parallel with the formation of a new unity government. He also noted that the Houthis might hand their weapons off to a third party, which may be more acceptable to passing them to forces under Hadi’s control.

Other developments inside and outside of Yemen, however, complicate the situation. Since the recess in the talks, the Houthi-GPC alliance convened what it describes as a quorum of the last elected parliamentarians. They reportedly voted unanimously to recognize the newly created ten-person Supreme Political Assembly. Hadi, the Saudis, the USA, the UN, the GCC, and pretty much all international powers failed to recognize the new assembly or the legitimacy of the parliamentary vote. Kerry’s recent comments did not mention the assembly at all, except perhaps in a veiled reference to unilateral moves that were harming the prospects for peace talks. The new assembly, whose seats are divided between Houthi and Saleh loyalists, has begun to meet and plan for Yemen’s future.

While Hadi and his allies reject the legitimacy of that new assembly, the parliamentary vote creates an obstacle because those MPs were internationally recognized when they were elected in 2003. A report by the National Democratic Institute cited problems with those elections, but it also praised them as an important step for the development of democracy in Yemen. Of course, that assembly was overwhelmingly filled with 221 of 301 seats going to members of Saleh’s ruling party, the General People’s Congress. Its original term should have expired in 2009, but Saleh suspended the assembly and delayed new elections.

Because the 2011 uprising was directed against then president Ali Abdullah Saleh—and not the elected parliament—it is difficult to dismiss out of hand the reconvening of a legitimately elected parliament, even if it was initiated by the Houthis and Saleh. Given that large swaths of Yemenis reject Hadi’s claim as Yemen’s legitimate president—his term expired in 2014, prior to the Houthi advance on Sanaa, and he was elected only by referendum, not in an open contest—dismissing outright the legitimacy of the elected parliamentarians may increase the already vast divide that needs to be bridged.

In a press conference with Saudi Foreign Minister Adel al-Jubeir, Kerry emphasized the urgency of advancing the talks and addressing Yemen’s worsening humanitarian situation. The UNHRD recently delivered tons of medicine on behalf of the World Health Organization, but the situation remains dire and is deteriorating. At least 13 million Yemenis are in need of immediate life-saving assistance, according to Jamie McGoldrick, the UN Resident Coordinator and Humanitarian Coordinator for Yemen. A minister in Hadi’s cabinet estimates that the reconstruction of Yemen could cost at least $15 billion.

But as Kerry spoke of the needs of the Yemeni people, he also emphasized repeatedly that the US was deeply committed to its partnership with Saudi Arabia. A peace agreement, he argued, must meet “the appropriate needs of respecting the sovereignty and the security of Saudi Arabia. The comments refer to the fighting on the Yemeni-Saudi border, in which Houthis are launching attacks, and which militant group, Ansar Allah, claims are causing more Saudi casualties than Riyadh admits. There is, however, no way to verify Ansar Allah’s claims.

Kerry stated that the Houthis must be represented in any transition process as well as in a new unity government. But his repeated comments that the United States was going to continue to stand by Saudi Arabia—which is backing Hadi—conveyed a clear message. That comes at a time of growing criticism within the US for Washington’s role in arming the kingdom. While Senator Chris Murphy has tirelessly advocated for a reexamination of US arms sales to Saudi Arabia in light of the atrocities of the war in Yemen, Senator Rand Paul recently joined him in those efforts. Yesterday the two put forth a bipartisan resolution in the Senate—along with Senators Mike Lee and Al Franken—calling for an immediate pause of arms sales to the kingdom.

Kerry’s intervention brings increased attention and effort from the United States to the devastating war in Yemen and its humanitarian consequences, but it is not likely to be embraced by the Houthis or their allies as long as the US continues to sell weapons to Saudi Arabia for use in Yemen.  The US also continues to conduct mid-air refueling for Saudi bombers, which contradicts Washington’s efforts to urge both sides to compromise.

The bottom line is that as the situation in Yemen deteriorates, the major parties to the conflict refuse to compromise on key positions. The UN Special Envoy continues to work openly and behind the scenes to get everyone back to the table, which will be essential for any peaceful resolution. But while Hadi and his allies continue to insist that the Houthis accept UN SC 2216, the Houthis are pushing forward with alternative political institutions. Neither of these efforts are helping to unite the warring parties as ordinary Yemenis continue to suffer.