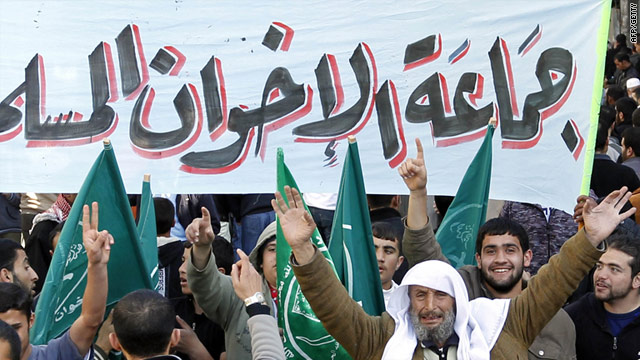 The dream of the Muslim Brotherhood, as it has been articulated since the days of Hassan al-Banna, has been to build the individual Muslim, his family, community, and government in accordance with the principles of Islam. After decades of restraint, the Brotherhood’s bold decision to nominate Khairat al-Shater for the presidential election could unravel what the group has worked to build since 1928.

The group’s controversial decision last week has opened a rift within the group of unprecedented scale. Many members and leaders of the group predict a looming internal battle which they fear can only result in a lose-lose situation for all.

Al-Shater lacks the charisma needed to resolve this battle in his favor, and even if he succeeds the Brotherhood will bear the crushing burden of managing the problems of a state on the brink of collapse and incapable of forcing the people to submit to Islamic law.

Unlike that boy does not have the personality charisma that help to resolve the battle in his favor, even in case of success will be on the group address the problems of state prone to collapse, and is ready to force people to submit to the provisions of Islamic law.  It looks like Islamists could soon see the victory they won in the parliamentary elections slip through their fingers, which would negatively affect the Brotherhood’s image and undermine the gains they have achieved through years of hard work.

Even a member of the Freedom and Justice Party’s own executive bureau, MP Mohamed El Beltagy, expressed these concerns in a comment written on his Facebook page, saying, "The brothers have fallen into a trap by nominating al-Shater.” He added, “It is an injustice to the country and to the Brotherhood to bear sole responsibility for the country under these difficult conditions, from the People’s Assembly and the Shura Council to the constituent assembly and the Constitution, and even the government and the presidency.”  He continued, “I am very concerned for the future of the nation, and the future of Islamism.”

The dream of achieving total control over society and resurrecting an Islamic empire is indoctrinated in all Muslim Brotherhood members at a very young age. The Brotherhood aims to achieve this ultimate goal by gradually Islamizing the individual and society in alliance with successive governments. In some cases, the Brotherhood negotiated “dirty” deals with the regime, such as when the Brotherhood agreed to withdraw from Tahrir Square shortly before Hosni Mubarak’s fall. Now, it appears that the Brotherhood is supporting military rule in exchange for the SCAF’s turning a blind eye to electoral violations perpetrated by the FJP during the parliamentary elections, such as the blatant use of religious slogans and excessive spending.

By the end of the Mubarak era, the Brotherhood was making considerable progress in its goal of Islamizing society and was in reach of the dream of an Islamic government. But while the Brotherhood had appeared content to share power with the military at the outset of the transition, following the sweeping Islamist victory in the parliamentary elections, the group suddenly made a bid to monopolize power.

The evolution of the Brotherhood’s historically cautious and pragmatic strategy toward a strategy of aggression saw a turning point during the protests on the anniversary of the January 25 uprising, during which anti-Brotherhood demonstrators tried to expel the group and its popular committees from the square. The parliament’s lackluster performance in its first months of operation has disappointed many Brotherhood supporters and led many to regret their votes.

The Brothers are finding themselves in a difficult position. Al-Shater’s nomination is enflaming a looming confrontation that the Brotherhood is not prepared for. But the Brotherhood’s promise following the January uprising that it would not field a presidential candidate had become untenable, because none of the Islamist candidates outside of the group – including former Guidance Bureau member Abdel Moneim Aboul Fotouh and the Salafi Hazem Saleh Abu Ismail – were deemed suitable for the nomination. And supporting a non-Islamist for the presidency was not an option, as it would have alienated the more conservative wing of the movement and induced damaging ideological infighting.

Some moderate Brotherhood leaders tried unsuccessfully to resolve this dilemma by lobbying for the nomination of “civil” candidates with Islamist tendencies – including president of the Supreme Judicial Council Hossam Ghariani and Tarek al-Bishry, former head of the committee on constitutional amendments – but al-Shater’s supporters ultimately prevailed.

The group’s decision-making process over the past few weeks appeared to be impulsive rather than strategic, and exacerbated internal divisions rather than fostering unity and solidarity around the chosen nominee.

A significant segment of the Brotherhood’s members – particularly youth – will continue working behind the scenes to oppose al-Shater, and would prefer a non-Islamic government, or at least a hybrid system to lead the country during this challenging transitional phase. At the same time, the conservative wing of the Brotherhood will try to accelerate the pace of Islamization with the aim of resurrecting the Caliphate; but growing opposition to this vision from within the Brotherhood itself could threaten the dream of total societal domination.

Will these internal divisions motivate the Brotherhood to promote reconciliation between moderate, youth and conservative supporters and put forward a unifying vision worthy of consensus?  The answer lies ahead on the road to the presidential election.