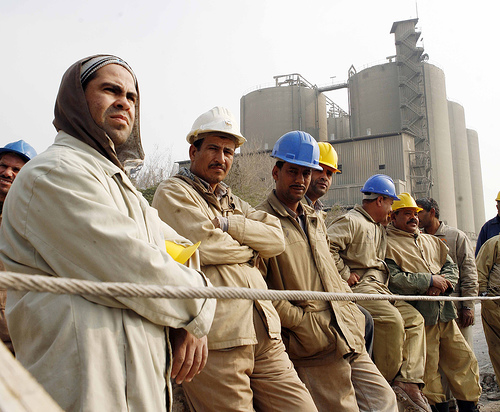 One year after the revolution triggered by the slogan, “Bread, Freedom and Social Justice,” Egyptians have gained some freedoms – despite the continuous crackdown on civil society and activist – but so far they have seen little progress toward the goals of achieving social and economic justice. On the eve of the January 25 uprising, labor activists are at the forefront of efforts to organize demonstrations demanding the realization of the revolution’s unfulfilled objectives.

Since assuming power last February, the Supreme Council of the Armed Forces (SCAF) has rarely articulated a clear vision or agenda to deal with Egypt’s deteriorating economic conditions and the demands of workers. For example, it has still failed to implement the minimum and maximum wage limits demanded by workers since 2007. Instead, the old regime‘s strategy has prevailed, in which labor demands were treated as a security matter that should be controlled and contained and not as a social grievance that could best be resolved through creating a new social contract guaranteeing economic opportunity and a dignified life for Egyptians. The continuation of the Mubarak regime’s heavy handed-approach to the labor movement is illustrated by the following actions:

These actions are clearly aimed at marginalizing the labor movement by preventing it from unifying under an independent federation that could represent and negotiate on behalf of workers. Instead, the current military leadership is still determined to contain the labor movement within the same old state-run framework (the Egyptian Trade Union Federation – ETUF) that has historically functioned as an adversary, rather than advocate, for the labor movement’s interests. Prior to the revolution, EUTF leaders were even negotiating with the workers as representatives of the regime. One year later, it seems that the current regime is just as determined to prevent the formation of a truly independent trade federation.

In this context, it is not surprising to see that the labor movement has embraced calls by youth movements and revolutionary groups calling for demonstrations on the anniversary of the January 25 uprising. Along with youth movements and new political forces, labor activists are among the most frustrated constituencies in Egypt at present. To date, none of their core demands have been achieved, foremost among them: a new minimum wage law; the granting of permanent contracts to workers employed on a temporary basis; and the issuing of the long-awaited draft law on trade unions.

The Egyptian Federation for Independent Trade Unions, formed after the revolution as an independent alternative to the state-controlled ETUF and currently representing more than 112 new trade unions, has confirmed that many of its member groups will participate in mass demonstrations demanding a transfer of power to civilians. Another umbrella group, The Egyptian Democratic Labor Congress (EDLC) representing at least 246 new trade unions has explicitly declared its participation in a statement published on its official Facebook page: “Workers with revolutionaries together continues the duties of the revolution.”

Watching this new flurry of activity, a question arises: Are we witnessing a new phenomenon and evolution of the labor movement’s relationship with political forces?

I would argue that we are indeed watching a new and unprecedented transformation, in light of the fact that since 2006, labor movements have categorically refused to coordinate with any of the opposition political forces, resisting efforts to politicize the demands of workers. These were the rules of the game under Mubarak’s regime: The government was willing to acknowledge and at least pretend to accommodate economic demands, but reacted with repression when it appeared that labor demands had the potential to morph into political ones:

Will the first anniversary of the January 25 uprising turn out to be a peaceful celebration, or a second wave of the revolution? No one can predict, but one thing is certain: The continuation of the same economic policies that neglect social justice concerns could undoubtedly lead to a labor movement revolution in the near future, particularly in view of that fact that in one hand,  right-wing Islamist and civil forces are the one who are mainly represented in the parliament and on the other hand, the current government lacks labor representatives who can advocate for the interests of workers through political and institutional channels. In the absence of a clear mechanism for exerting influence over public policy, frustrated labor activists could easily take their demands back to the streets.

Nadine Abdalla is a Research Fellow at the Arab Forum for Alternative Studies (AFA) in Cairo and Ph.D. candidate at the Institute of Political Studies (IEP) in Grenoble, France. Her research interests include labor movements in the post-Mubarak era and democratic transitions in comparative perspective, with a focus on Egypt and Eastern Europe. She can be reached at [email protected]