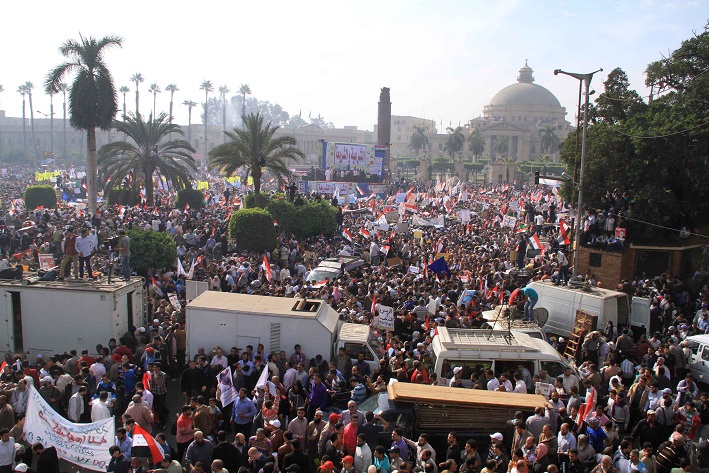 As hundreds of thousands of President Mohamed Morsi’s supporters gathered in Cairo and Assiut on Saturday, the president announced that Egypt’s draft constitution would be put to a national referendum on December 15, 2012. The referendum will be held in just over two weeks, in the midst of an ongoing struggle between the president and the judiciary.

In his speech, Morsi described the draft as "the first truly representative constitution that protects the rights, freedoms and human dignity of all Egyptians," adding that it was "born out of the 25 January Revolution." Morsi praised the Constituent Assembly, including those who chose to withdraw due to a lack of consensus.

Morsi encouraged Egyptians to vote on the draft constitution, invoking a similar call as did his predecessors, one for stability in Egypt. Egypt’s judges, with whom Morsi is currently embroiled in a struggle over his November 22 decree, received a nod of their own from the president. "I commend Egypt’s judges who we highly respected, particularly for their role in overseeing the elections under the former regime and deeming them fraudulent. This great body will continue to ensure the protection of Egyptians’ rights and freedoms," he said.

However, with the referendum just two weeks away, it remains to be seen whether Egypt’s judges will be monitoring the vote at all. Before Morsi issued his constitutional decree, talk of a judicial boycott had already emerged, sparked by their dissatisfaction with the draft constitution. With the November 22 Decree leading to an ongoing judges’ strike, it appears that a large portion of Egypt’s judges are digging in their heels, planning to go through with a boycott of the referendum.

Boycotting, however, has not enjoyed a high rate of success in Egypt’s political arena. Egyptians went to the polls for the first time in the wake of the collapse of Hosni Mubarak’s regime to vote on constitutional amendments put forth by the then ruling Supreme Council of the Armed Forces (SCAF). At the time, Islamist movements, fearful that any mention of Sharia would be removed from the constitution, sided with the SCAF and campaigned heavily in favor of a ‘Yes’ vote. Secular movements criticized what they saw as the use of religious influence to sway voters, an allegation that the Brotherhood, for its part, strongly denied. Some activists called for a boycott of the referendum, on the pretext that voting in a SCAF-led poll served to legitimize military rule, and undermined the push for a transitional technocrat government.

As Morsi’s opponents are into their eighth day in a sit-in in Tahrir, calling for the president to revoke his decree, they must now also turn their attention to the referendum, and already appear to have some catching up to do. Before the Constituent Assembly had completed its work, the Muslim Brotherhood had already started campaigning in favor of the constitution. As the sit-in and protests continue, the secular movements face the same decision they made in March 2011.

The constitution itself is not without controversy. Human Rights Watch expressed its concern over certain articles in the draft constitution, saying that it "provides for basic protections against arbitrary detention and torture and for some economic rights but fails to end military trials of civilians or to protect freedom of expression and religion." The draft constitution also does nothing to guarantee women’s rights in Egypt.

Journalists are calling for "blank newspapers" on Tuesday, while TV channels are expected to go dark on Wednesday, in an attempt to express their opposition to both the draft constitution and Morsi’s decree. Mohamed ElBaradei, reemerging as a key figure in Egypt’s opposition, took to Twitter with his reaction to the referendum, saying, "Morsi put to referendum a draft constitution that undermines basic freedoms and violates universal values. The struggle will continue."

Despite the judges’ strike, despite fact that the Constituent Assembly has already completed its work, and despite Morsi’s November 22 decree, the Supreme Constitutional Court is to meet on Sunday to look into the assembly’s dissolution. At the same time, the administrative courts will also be considering cases filed against Morsi’s decree itself. How much leverage the courts actually have is unclear, with a legal stalemate in place.

Many believe that a judicial boycott provides judges with the leverage they need to use in their struggle against the president. With Morsi describing his decree as a temporary measure until Egypt’s constitution is in place, he could do well to appease them by annulling it, in order to ensure the judiciary’s participation in the referendum. While judicial monitoring at the polling stations is a legal requirement, by virtue of his decree, Morsi could just as easily push forward with a referendum that does not involve the judiciary, leading the nation down an even more entangled legal path.