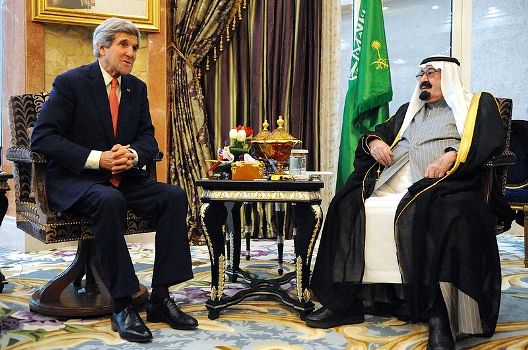 Next week, President Barack Obama is set to pay King Abdullah of Saudi Arabia a high-profile visit as he seeks to restore fraught relations over Syria and Iran policy. Although the two leaders are expected to hold wide-ranging consultations over regional developments, it remains unclear whether the US president has set aside time on his agenda to discuss how reach a proposed bilateral nuclear cooperation agreement. Under the Atomic Energy Act of 1954, the US government is required to conclude Section 123 agreements with prospective foreign partners in order to legalize nuclear commerce. Efforts to reach a US-Saudi civilian nuclear cooperation agreement, however, have formally stalled over whether the “Gold Standard” provision proscribing the kingdom from enriching uranium or reprocessing plutonium (ENR) would be required.

In the case of Saudi Arabia, the dispute over whether a proposed 123 agreement should include the Gold Standard is merely a theoretical exercise: The Kingdom plans to build sixteen nuclear power plants at an estimated cost of $112 billion to meet its electricity needs as the country aims to transform herself into one of the world’s largest nuclear producers. Saudi Arabia, along with her Gulf Cooperation Council allies, currently consume more primary energy than the whole of Africa, yet have one-twentieth of Africa’s population. Almost 100 percent of that energy is produced from oil and gas without carbon dioxide abatement. If the region’s fuel demand continues to rise as it has over the past decade, energy consumption would double by 2024. In line with these trends, Saudi Arabia’s position as the world’s largest swing producer of petroleum could decline. As global energy production costs are not declining, it is not surprising that the Kingdom has chosen a nuclear power strategy to maintain its oil generated export revenues as it accounts for 80 percent of its national revenue. Saudi Arabia’s growing energy demand coupled with its generous domestic energy subsidies could therefore potentially curtail the country’s ability to export its oil and gas liquids. While these trends pose clear challenges to the Saudi treasury, they also present opportunities for US businesses to enter what could become the world’s largest nuclear market: Saudi Arabia also has the necessary capital markets and financial resources required to support its apparent energy transformation vision.

While the market value of oil is increasing, solar energy prices have become cheaper, thus triggering an economic incentive for the kingdom to pursue a diverse energy mix to meet its electricity demands. Within this context, the government established the King Abdullah City for Atomic and Renewable Energy (K.A. Care) in 2010 in order to build a sustainable future “by developing a substantial alternative energy capacity fully supported by world-class local industries.” Saudi Arabia is also expected to examine what aspects of its proposed civilian nuclear program could be developed indigenously as the post-Arab Spring environment has put pressure on the government to create thousands of jobs for its growing population.

In a clear sign of US support for a Saudi civilian nuclear program, the Bush-administration and the Kingdom signed a Memorandum of Understanding in 2008 in which the parties recognized Riyadh’s intend to rely on international markets for nuclear fuel and not pursue sensitive nuclear technologies. So far, the parties have reached an understanding on everything except for the ENR provision, which is presently “being studied” by K.A. Care.

Given that the Saudi royal family clearly considers itself the steward of Arab ancestral pride and its Kingdom the custodian of the two holy mosques, it is not surprising that US insistence on the Gold Standard provision has become a major obstacle to the proposed 123 agreement as Riyadh’s ENR rights under the Non Proliferation Treaty (NPT) have become a matter of principal routed in the Kingdom’s sovereignty. Under the NPT, signatories have a sovereign right to develop peaceful nuclear energy as defined by the UN International Atomic Energy Agency (IAEA).

In line with Riyadh’s demonstrated quest to transform its energy industry, the Kingdom is expected to issue a request for a nuclear power plant tender later this spring, a move likely to be closely monitored by both Washington and various business groups. Amid these prospects, however, the US business community, spearheaded by its nuclear industry and a consortium of subcontracting companies, find their interests directly at odds with Congress: Ever since the United Arab Emirates (UAE) chose to voluntarily forego its ENR requirements in a landmark 123 agreement signed with Washington in 2009, a proliferation weary Congress has insisted that the Gold Standard must be upheld as a model for peaceful technology cooperation with other countries.

Complicating matters, the recent interim agreement between Iran and the world powers has not only granted Tehran de-facto permission to enrich some of its uranium, but brought ongoing US-Saudi 123 negotiations to a standstill: Unlikely the UAE, Saudi Arabia is unlikely to accept Iran’s de facto right to enrich while having to compromise its own ENR interests.

The failure to reach a 123 agreement would not only effectively bar US businesses from entering what is expected to become a financially lucrative market, but provide market access to its French and Russian competitors. Industry executives and trade specialists recently said that upholding the “Gold Standard” would hurt US business interests as the Kingdom has signed nuclear cooperation agreements with France, South Korea, China and Argentina, leaving Riyadh with clear options should it fail to reach and understanding with Washington. Industry executives also fear that should US business lose out on this important market, safety standards could fall as their foreign competitors do not have to comply with best practices set forth by the US Nuclear Regulatory Commission. The failure to reach an agreement on this contentious issue could have wide ranging implications for the US-Saudi strategic partnership, for US job creation, and for national security, they say.

Given how politically sensitive removing the ENR provision from a US-Saudi 123 agreement has become for the White House, it is unclear whether this is a battle the Obama-administration wants to take to Congress. Unlike for the US-UAE 123 agreement, for which the Israel-lobby gave its tacit approval, they would likely oppose a US-Saudi agreement without an ENR provision. Fearing a potential backlash in the US Congress similar to what the UAE experienced over the Dubai Port World controversy in 2006, Saudi Arabia has not surprisingly sought to keep the current negotiation impasse out of the limelight. At the same time, given these political constraints, it is unclear whether the Saudi nuclear program is going forward. And if it is, whether Washington or Riyadh will prioritize reaching an agreement remains to be seen.

At this critical juncture, should President Obama decide to prioritize the proposed 123 agreement with King Abdullah, he can get to “yes” by either flexing America’s diplomatic muscle as Riyadh is directly depended on Washington for its security and support for its positions on Syria and Iran. Alternatively, the president can also reach an understanding with the king by forgoing the Gold Standard provision, a move likely to be welcomed by the US business community as a deal that would help create tens of thousands of US jobs and enhance national security. An agreement would also benefit US-MENA technology cooperation, enhance safety, and strengthen best practices to counter proliferation. Either way, if the Obama-administration does not position itself on this issue, Washington will have no influence should Riyadh decide to go forward with its nuclear program.