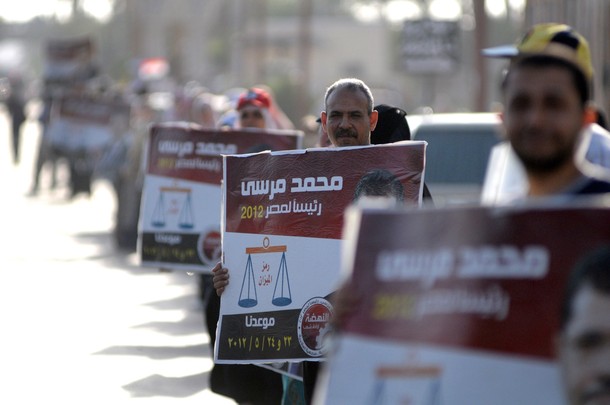 Riding around Cairo, electoral posters are in view everywhere but not in superabundance.  From Freedom and Justice candidate Mohammed Morsy’s red posters pronouncing that “renaissance is the will of the people” (a rather clever attempt linking a 2011 revolutionary slogan to the Muslim Brotherhood’s “Renaissance Project”), to Amr Moussa’s “Egypt needs the work of every Egyptian” (also could be understood as meaning “a job for every Egyptian”), to leftist candidate Khaled Ali’s simple “bread, freedom, and social justice,” the campaign literature in its diversity makes for fascinating reading.  So far I have come across only one of the hand-painted banners that used to drape the streets before each of former President Mubarak’s re-elections, in which a particular company or organization proclaimed its loyalty—and that one was appropriately enough for ex-military candidate Ahmed Shafik, who was briefly (and disastrously) prime minister at the end of Mubarak’s presidency.

With less than a week to go before the presidential race, there are fewer campaign materials around than there were before the parliamentary elections six months ago, but it would be misleading to conclude that interest in the presidential race is less.  In fact, every Egyptian I have asked so far has predicted that voter turnout will be higher than the 60 percent or so who turned out then, so Egypt could be looking at voting by 30 million or more of the 54 million registered to vote.

With a few important exceptions—the Muslim Brotherhood keeps warning of possible fraud—most Egyptians I have consulted expect the SCAF to abide by its pledge to hold a free and fair presidential election.  Experts at the International Foundation for Electoral Systems Cairo office said that the Presidential Election Commission (PEC), the group of high-ranking judges supervising the election, have made many technical improvements to electoral procedures as compared to those used during the parliamentary elections.  They have obtained new transparent ballot boxes with numbered plastic seals, to replace the primitive glass-sided wooden boxes and messy wax seals used in the parliamentary election.  Ballots will be smaller and simpler, displaying the name, photo, and symbol of each of the 11 remaining presidential candidates—unlike the enormous unwieldy sheets used for the parliamentary elections.

I had been wondering how the PEC would meet the requirement for judicial supervision in the upcoming election, in which voting will take place nationwide simultaneously over two days (May 23-24).  Parliamentary elections were held in three rounds, precisely because there were not enough judges to supervise all polling stations at once.  Apparently the PEC has solved this problem by consolidating the ballot boxes into fewer voting stations, so there will be approximately 13,000 polling stations instead of the 50,000 in other elections, with each station serving 2,000-6,000 voters.  Each judge will need to supervise as many as 6 ballot boxes (most of them supervised 2 in parliamentary elections).

Another big change, which most observers consider an improvement, is that votes will be counted inside each polling station after voting ends.  In the parliamentary elections, the boxes were transported to central locations for counting, making it impossible for candidate agents and monitors to watch the count closely.  Vote tallies will be sent to central locations in tamper proof clear plastic bags.

Speaking of monitors, an unfortunate change in the presidential election is that there will be many fewer civil society and international monitors, as a result of the NGO crisis (the lawsuit against NDI, IRI, and Freedom House employees is still on) and a subsequent near-halt in foreign funding.  So it will largely be up to candidate agents to spot and report fraud.

Which brings me back to the question of the Brotherhood’s increasingly shrill warnings that it will not tolerate rigging, and that if candidate Ahmad Shafik makes it past round one, that will be a sure sign there was fraud.  In the weeks between the elimination of several high-profile candidates and the May 10 televised debate, Amr Moussa and Abdel Moneim Aboul Fotouh were considered the clear front runners.  But in the week since the debate, Shafik and Morsy seem to have gained popularity at the expense of the other two.  Even Nasserist Hamdeen Sabahi, who has no chance of winning, picked up a lot of impressive endorsements recently.   The Brotherhood apparently is discounting the chances of Moussa and Aboul Fotouh and has identified possible vote-rigging in Shafik’s favor as the major threat.  It is not clear whether the Brotherhood is really onto something here, or just engaging in old-think; I recall that the Brotherhood made similar accusations at the time of parliamentary elections about ex-NDP candidates, who turned out to be a non-factor.

One more wild card is that the SCAF might well issue a revised version of the constitutional declaration issued in March 2011, which apparently does not contain enough detail about the powers of the president, before the election.  Admittedly the declaration reads as if it were written with the expectation that it would be replaced by a new constitution before the president was elected.  This opens up the possibility that the SCAF could use this opportunity to change any number of things in the declaration, which is making the Brotherhood hyperventilate.  Many observers wish the SCAF would alter the controversial Article 28 of the declaration, which specifies that PEC decisions cannot be challenged in court, but it is not clear whether that will happen.

Let’s hope the Brotherhood’s concerns are misplaced.  If there is an attempt at widespread vote-rigging or if the SCAF makes wholesale changes in the rules of the game just days before the election, there will be trouble.  As a Brotherhood member told me today, “we know there was small-scale fraud in the parliamentary elections, affecting 10 percent or so of the outcome.  But if there is mass fraud in the presidential election, expect a second revolution.”

Cab driver quote of the day: “I don’t care who wins the election and I don’t plan to vote.  Anyone who would want to be president of Egypt under these circumstances is an idiot.”