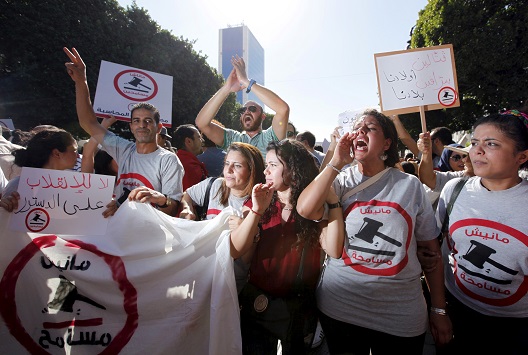 Following the attacks at the Bardo museum in March and at a resort in Sousse in July, a drop in tourism revenues and decreased foreign investment have depressed Tunisia’s already stumbling economy. Tunisia’s growth rate has since shrunk to a predicted 0.5 percent in 2015.

The Reconciliation in the Economic and Financial Sectors Bill (Draft Organic Law No. 49/2015, Arabic), introduced and sent to the parliament in July by President Essebsi, proposes a pardon for civil servants and businessmen who committed economic or financial offenses under the Ben Ali regime. Specifically, prosecutions, trials, and sentences for those accused of financial crimes would be waived if such individuals return a portion of their illicit gains to the government. Notably, the bill includes an explicit provision that negates all articles in Tunisia’s Transitional Justice Law (Organic Law No. 53/2013) related to financial corruption and misappropriation of public funds. The bill would establish a small commission to handle the reconciliation process. The commission would include members of the president’s office and the Truth and Dignity Commission (TDC), headed by Sihem Bensedrine.

The TDC plays a central role in addressing public grievances expressed during the revolution in Tunisia by documenting Tunisians’ complaints, determining reparations, and facilitating national reconciliation. So far, more than 16,000 Tunisians have filed cases with the TDC. According to Transparency International, the reconciliation bill grants the new commission final, irreversible, and unappealable decision making power over corruption cases. TDC officials argue that such overriding authority undermines the TDC’s independence and mandate to investigate, review, and issue judgments over these cases.

Essebsi has described the bill as a way to “turn the page on the past” that is firmly rooted in transitional justice. He posits that allowing former officials and businessmen to reenter the economic sphere would encourage much-needed investment and boost the economy. Additionally, it would allow the state to avoid costly and lengthy investigations into financial crimes, leaving space to focus on urgent priorities like counterterrorism and economic revival. Nidaa Tounes Secretary General Mohsen Marzouk has stressed the need for financial reconciliation to establish a unified approach to economic recovery, saying, “How can we fight terrorism and work together on the economy, how can we involve all of Tunisia’s capacities, if we can’t have reconciliation?” More recently, Nidaa Spokesman Boujemaa Remili emphasized the need to accelerate the reconciliation process beyond the TDC. “Today, [the TDC] has received some 16,000 complaints. So, if every year it treats 1,000 complaints, it will complete its work towards the year 2031. Can the country really wait that long [for reconciliation]?”

Other political figures, including Ennahda leader Rachid Ghannouchi and President of the Free Patriotic Union (UPL) Mohsen Hassan, have expressed support for the bill. Ghannouchi said the money recovered from the bill could be invested to create jobs in disadvantaged regions, which Tunisians need “more than ever.” Hassan dismissed the apparent contradiction between the reconciliation bill and the TDC, arguing that the law would provide Tunisia with “new revenue streams.” According to Lofti Dammack, adviser to Essebsi, the funds received through the bill will be “deposited in a special fund” for regional development infrastructure.

However, the reconciliation bill has also met considerable criticism. The TDC’s Bensedrine is one of its most vocal opponents. She argues that the TDC’s mandate requires it to shed light on the mechanisms of repression by the former regime, namely corruption and financial crimes. Implicit in Bensedrine’s critique is the belief that Tunisia cannot simply turn the page on the thousands of complaints the TDC has received to date. Rather, reparations, institutional reform, and accountability are imperative to dismantle the old system and build a new, unified democracy.

International institutions have also criticized the reconciliation bill. International Center for Transitional Justice President David Tolbert revealed flaws in the functionality of the bill, including the apparent lack of transparency and accountability measures to prevent “fraud and collusion.” He argues that enabling perpetrators of financial crimes to retain illegal funds with little threat of retribution may set Tunisia on a path of recurrent corruption and crony capitalism. Transparency International condemned the bill, saying, “[It] allows the most corrupt in Tunisia to escape justice… [and] would make a sham [of reconciliation.]” Tunisian civil society groups, including the Tunisian League for Human Rights and I Watch, have also criticized the bill’s lack of transparency and questioned its constitutionality.

The Tunisian General Labor Union (UGTT), a powerful political player, has rejected the bill and called for its withdrawal. Representatives of opposition parties, including the Popular Front, the Democratic Current, the People’s Movement, and Al-Joumhouri, also collectively denounced the bill as unconstitutional, called for its withdrawal, and organized a national protest.

Protests against the bill have spurred a harsh response from the government. According to multiple accounts, including reports from Human Rights Watch, the government has used force against peaceful protestors organizing against the bill. On September 8, police forcibly disbanded demonstrators. The Interior Minister has sought to prohibit protests, disparaging them as security threats and “contrary” to Tunisia’s state of emergency.

The issue of financial corruption is clearly a sore point for the public. Aside from the implications of a crackdown on peaceful protesters, these events have clearly added to the divisive environment surrounding the reconciliation bill.

Neither supporters nor critics of the law, however, can predict exactly how the bill would affect the economy or the transitional justice process. The financials are particularly hard to forecast; the administration has done little more than suggest improbable figures predicting the financial benefit. Additionally, the identity and number of those affected is not certain, nor how much money they should or would return. Neither has the government specified how it would use the money to benefit Tunisia’s economy, the short and long-term effects of the injected funds, or how pardoned businessmen will behave once given amnesty.

Similarly, the probable outcome of the transitional justice process remains unclear. While Bensedrine has made a compelling case against the bill, reconciliation is a necessary step in transitional justice. Yet the TDC suffers from its own structural flaws. The committee, which has a four-year mandate, was plagued by delays during its first year. Bensedrine’s leadership has also been questioned amid a flurry of unexplained resignations. These controversies point to the political strife that has characterized a contentious Tunisian process with no clear or quick path to transitional justice.

The bill has provoked considerable mistrust at a time when Tunisia, plagued by a spiraling economy and relentless security challenges, desperately needs unity. Trust is needed among the Tunisian people and the country’s political parties as the government prepares to embark on challenging reforms that may be its only hope for economic survival.

While Essebsi maintains that the reconciliation bill is both constitutional and necessary, recent events suggest that the government recognizes the polarizing effect it has had on Tunisians and could consider amendments. Nidaa Tounes has reportedly opened the law for discussion and accepted alternative proposals from political parties. Tunisia’s second ordinary parliamentary session should begin in mid-October and will reportedly focus on the bill. Should these discussions fail, the government may want to reconsider pushing forward with such a controversial law whose ultimate impact on the country’s economy remains unknown.

Elissa Miller is a Program Assistant with the Atlantic Council’s Rafik Hariri Center for the Middle East.

Katherine Wolff is a Program Assistant with the Atlantic Council’s Rafik Hariri Center for the Middle East.

Image: Protesters shout slogans during a demonstration against the economic reconciliation bill at Bourguiba Avenue in Tunis September 12, 2015. They wore t-shirts saying "I won't forgive" and held a sign saying "No to overthrowing the constitution." (Reuters)