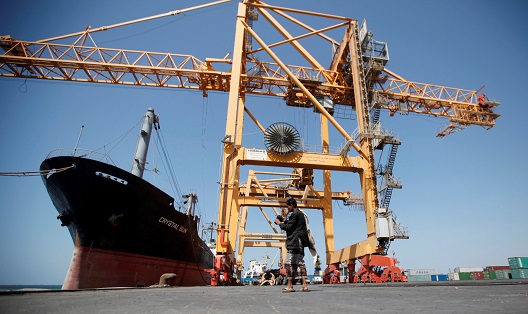 The Hudayda (also spelled Hodeida) port receives about 70 percent of all imports and humanitarian assistance shipments to the poorest country in the Middle East, wracked by decades of on-and-off conflict and standing at the precipice of famine thanks to the most recent conflict between the rebels and those backing President Abdrabbo Mansour Hadi, including the Saudi Arabia-led Coalition. It also constitutes one of the last remaining portals to the outside world through which the Houthi rebels and their allies—tied to former disgraced president Ali Abdullah Saleh—receive weapons, ammunition, and financing.

The internationally recognized government sees the capture of the port as one of the last nails in the rebels’ coffin to weaken the Houthi-Saleh alliance, reinstate Hadi’s claim to the disrupted transitional process, block Iranian influence in the Arabian Peninsula, and restore security to Saudi Arabia’s southern border. Doing so, however, potentially condemns hundreds of thousands of Yemenis to starvation with no guarantee of achieving these objectives.

Yemeni civilians are caught in a crossfire for which there are no easy answers. On one hand, the Houthi-Saleh forces that control the port of Hudayda obstruct the passage of basic goods and foster a black market for these commodities that they use in part to fund their war effort. Yemeni Ambassador to the United States Ahmad Awad Bin Mubarak wrote an impassioned article in Newsweek defending his government’s need to reclaim the port. By doing so, he writes, the Yemeni government would not only stop the “destructive meddling in aid distribution” and harassment of aid workers, it would also lift the repression for those Yemenis who suffer abuses—from disappearances to extrajudicial killing—at the hands of rebel forces and protect international shipping lanes in the Bab al-Mandab strait.

On the other hand, the Saudi-led Coalition that currently enforces a naval blockade on Yemen to cut the Houthi supply lines, preventing arms and other types of smuggling, has also hindered the delivery of basic humanitarian goods into the country. The net result halts the shipment of much needed assistance (including food and non-food items such as medicines, materials, etc.) to a conflict-stressed Yemeni population. Removing the Houthi-allied forces from Hudayda—indeed from Yemen’s western coast entirely—could potentially clear the way for improved humanitarian access. Yet the degree to which the rebels have entrenched themselves in the port city increases the likelihood of immense damage to the already damaged necessary infrastructure to deliver and transport the much-needed goods. Even if the Coalition manages to spare the port from excessive damage, the battle would undoubtedly create a new front through which nothing would pass in the immediate future. As a primary lifeline for the rebel forces, they would not likely give up such a strategic asset without a prolonged fight.

The military option also faces some difficulty within the Hadi-Coalition camp. Southern resistance forces have had to contend with internal divisions on whether or not to support any northern offensives. The much-hailed victory in taking the coastal Mokha area with the help of a Southern contingent has shown signs of continued conflict, prompting more air strikes and ongoing clashes as the rebels’ harass or retake portions of Mokha. The concentration of government forces in captured areas makes targeting with rocket and mortar fire that much easier for the Houthis. The successful killing of the Army Deputy Chief and Southern commander, Staff Major General Ahmad Saif al-Yafii, in February dealt a serious blow to Coalition efforts to maintain its gains in the coastal offensive. His death no doubt strengthened Southern dissident voices who object to pushing further north. Despite the proposed use of professional Coalition units (namely the Emirati special forces) to take the Hudayda port, the lack of sufficient Yemeni ground forces to hold these areas poses a dilemma and risks the lives of both Coalition and civilian forces in the aftermath as retreating rebels conduct retaliatory strikes.

The Coalition had suggested that commercial and humanitarian shipments be rerouted to the port of Aden, but this option also raises serious concerns over both the capacity of other ports to deal with maritime traffic and humanitarian access to the rest of the country. Aden does not have the capacity to handle the volume of cargo that would require rerouting if Hudayda were to shut down. Also, it places most of the assistance behind a literal firewall. The Hadi government controls the southern provinces in Yemen, an area that hosts 5 million of Yemen’s approximately 27 million residents. Although UN and other aid agencies have included the option in their contingency planning in case of an attack on the Hudayda port, reaching the other 22 million Yemenis—7 million of whom lie on the brink of starvation—would require crossing insecure battle lines, posing a serious risk to both aid workers and the assistance they would try to transport.

The Trump administration has recently signaled its willingness to continue and expand its support for the Coalition’s efforts as a means to counter Iranian influence in the region. It has already given expanded authority to the Pentagon and to the CIA to make operational judgement calls against the Yemeni branch of al-Qaeda without the previous Obama-era vetting and final approval from the White House. As many analysts have noted, however, reducing such vetting efforts may allow the military to respond faster, but also significantly raises the specter of increased civilian casualties. Similar policies in Syria have resulted in a corresponding increase in civilian deaths, adding to the horror of the six-year conflict there. Transferring these policies to confronting the Houthis in highly populated areas such as Hudayda would expose the US military to accusations of supporting (or potentially committing) war crimes. Recognizing this dilemma, members of Congress have demanded that Trump ask permission for increased military support through the War Powers Resolution of 1973 that requires the president to receive Congressional authorization. Representative Mark Pocan has put forth a letter to President Trump for his House colleagues to sign, echoing efforts from Congressmen Ted Lieu, John Conyers, and others to hold the administration accountable for actions that “may plunge our country [the United States] into a protracted and unpredictable Middle East war.”

It is no wonder that UN Special Envoy Ismail Ould Sheikh said in his recent visit to Washington DC, “We as the United Nations are advocating that no military operations should be undertaken in Hudayda.” Despite the Coalition’s valid concerns—those of Saudi Arabia, in particular—over the Houthis’ use of the port to prolong the war, the price of victory could cost millions in civilian lives as the impact forces them into famine. The cost to the Saudi and Emirati’s international and domestic standing would also be high in the face of Yemenis dying en masse and increased Coalition casualties. The cost to the Hadi government would include what legitimacy he has left, threatening the prospect of a stable Yemen in the future. And lastly, the cost to the United States would be a lawless terrorist haven that could risk more US civilian and military lives. Yes, taking Hudayda could help win this war for Hadi and the Coalition, but perhaps a less pyrrhic victory could be found.

Tarek Radwan is a nonresident fellow with the Atlantic Council’s Rafik Hariri Center for the Middle East and Advocacy Director at the Arab Center for the Promotion of Human Rights.