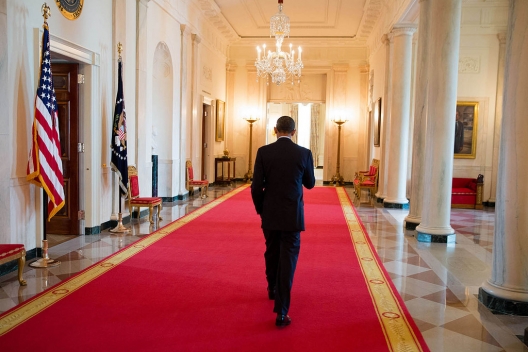 By all credible indicators, a democratic Egypt appears more remote than ever, but President Barack Obama’s administration doesn’t seem ready to admit this grim truth.  A review of key statements on Egypt during the past month shows the wishful thinking shaping the discourse as the United States struggles to reconcile its declared support for democracy with the reality unfolding on the ground.

Of course, what the United States says about Egypt’s democratic progress is only one dimension of a complex bilateral relationship that revolves, as President Obama has said, around cooperation on core security interests.  But such rhetoric is a primary way in which the United States communicates its position on democracy and human rights, the most prominent and divisive issue in US-Egypt ties, and the one that President Obama has asserted will determine future US support for the country.  Thus the statements are worth a close look.

On several occasions during March, US officials spoke out forthrightly about serious human rights violations, at times sharply criticizing the Egyptian government.  But they tended to cast them as “setbacks” in some broader democratic march forward, rather than as yet more evidence of the reconstruction of an authoritarian system following the military ouster of the Muslim Brotherhood-led elected government on July 3, 2013.  The administration continued to argue that “engagement” with the Egyptian authorities is the best way to help bring about positive change, despite the meager results so far.  And despite its previous calls for a return to democratically-elected civilian leadership, the United States avoided comment when Field Marshall Abdel Fattah al-Sisi gave his long-awaited announcement on March 26 that he had resigned as defense minister to run for president.  Sisi, who was the architect of the Brotherhood’s ouster and effectively has presided over the harsh crackdown since, appeared in uniform for his announcement, underscoring his military role.  His inevitable victory is likely to strengthen the military-security establishment’s dominance over politics for the foreseeable future.  Yet, US officials continued to talk about a “democratic roadmap” and a “democratic transition” in Egypt, while at the same time subtly lowering the criteria for what democratic progress would entail.

Parsing these statements leads to several broader observations about US policy.

First, perhaps references to a “democratic transition” or “democratic roadmap” are just verbal slips and are not meant to reflect the actual US reading of the situation.  Or perhaps they are intended to convey that the United States still supports such a transition as a long-term outcome in Egypt, even if Egypt has fallen far off the democratic rails.  If this is the case, the White House should impose more clarity and discipline in the messaging.  More likely, these references reveal a wishful thinking about what is actually happening in Egypt. A significant process of change is underway, but it has nothing to do with creating a democracy, and the sooner the United States acknowledges this, the better.  Rhetoric that associates Egypt’s trajectory with a democratic transition is not only bad policy for Egypt, but also cheapens the US global message on democracy.

Second, while the administration appears uncomfortable with the situation in Egypt, or at least with the deteriorating rights environment, it does not yet see the country as an urgent problem requiring a policy course correction. An alternative to the current rather reactive policy would be a more pro-active strategy for confronting resurgent authoritarianism and for advancing democratic values and protecting human rights.  But the administration believes that that the United States has very little ability to exert positive influence on Egypt’s internal situation.  Thus it has not been compelled to examine more rigorously and creatively all the ways in which it could use its sources of leverage and influence (including its public rhetoric) to greater effect.

The administration may decide to keep military aid suspended until a less awkward moment, hoping that something positive will happen in Egypt soon to justify providing the weapons systems on hold for months.  But then the United States likely will try to build a stronger relationship with President Sisi, convincing itself that he will improve the governance and rights situation (more wishful thinking).  This relationship-building probably will require scaling back our democracy exhortations and standards, in order to reduce tensions with Cairo.  The gravitational pull in US-Egypt ties, centered as they are on security cooperation, is always toward a strong (or at least a workable) government-to-government relationship.  Under such circumstances, serious friction over divisive issues such as human rights is hard to sustain for too long.  And Sisi would hardly fail to have noticed that since Hosni Mubarak’s ouster, in the major disputes over democracy issues Washington has always blinked first.  An upsurge of terrorism inside Egypt will only intensify this tendency.

Third, although the administration would prefer a democratic outcome in Egypt, it still does not see this as critical to US interests.  The reality behind the rhetoric is that none of Egypt’s democratic failures in the past three tumultuous years have yet harmed the security center of the bilateral relationship.  Observers worry that the situation in Egypt could be heading toward a disaster with terrible repercussions for the United States, and that placing too many of our eggs in this Egyptian regime’s basket is unwise.  But until the Obama administration concludes that Egypt’s repression has reached intolerable levels, or that its internal politics directly threaten important US strategic interests, democracy and human rights will continue to be an appendage to the core policy, not an organizing principle.  The United States will keep talking about democracy in Egypt, because constituencies inside and outside the administration will keep pressing for democracy to be a visible part of US policy.  But until the United States reorients its policy, this rhetoric will mean little in the bigger picture, and the democracy message will continue to be as muddled as the situation in Egypt.

Amy Hawthorne is a resident senior fellow with the Atlantic Council’s Rafik Hariri Center for the Middle East.