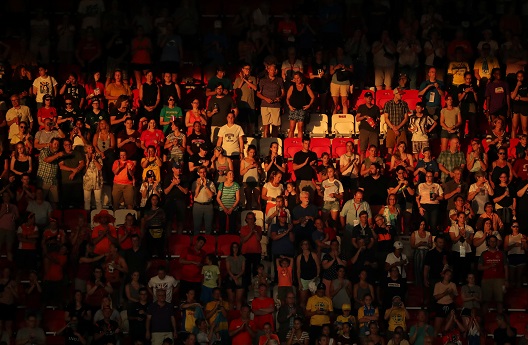 The final match of the Women’s World Cup 2019 is a few short days away and the Fédération Internationale de Football Association (FIFA) expects viewership to reach one billion. With all the excitement these past months have generated, it is hard not to notice a glaring discrepancy in representation. There is not one team from the Middle East that qualified. Is it because the sport is less popular in this region? Is it because the women don’t want to play? The answer to both questions is no. Soccer is in fact one of the most popular sports in the Middle East. According to a report on sports in the region, “Soccer is woven tightly into the lives and cultures of the peoples of the Middle East.” Anyone should be able to grab a ball, gather some neighborhood kids, and play a pickup game barefoot from Sao Paulo to Tokyo. But what about Kabul, Tehran, and Ankara? When girls or women try to enter the game, it isn’t as simple as it is for boys and men. This is especially true in the Middle East.

Girls in the region are discouraged from playing soccer through religious barriers, cultural norms, financial discrimination, imposed dress codes, and constant harassment. In very religious families, it is expected that girls and women should generally stay at home. Many believe playing soccer could invite sin, diminish their femininity, or even change their sexual orientation. Women are fighting against the backdrop of soccer being seen as a “man’s sport” with no place for women. There is also a financial unwillingness to support their play. Women’s soccer is seen as secondary to men’s and since they earn significantly less than men, it isn’t seen as a viable career path. Women’s attire is also always up for debate. Most Middle Eastern countries deem it inappropriate for women or girls to run around in shorts and a t-shirt in public. Finally, even if a little girl or grown woman persists against the objections of her family and societal pressure, secures funding, and sports modest clothing, she is still faced with a barrage of harassment in the form of catcalling, assault, and death threats.

There are only a handful of crowning examples within the Middle East where women have managed to play soccer in spite of these challenges. Two prominent examples are Turkey and the United Arab Emirates (UAE). In 2009, Turkey founded a new women’s professional league. Prior to that, there was an amateur league with about twelve teams that lasted a decade before it was forced to disband amidst allegations of mismanagement and romantic affairs between the players. Even though Turkey is the bridge between Europe and the Middle East, it is seen as inappropriate for women to play in public wearing a shirt and shorts. In Turkey, like much of the Middle East, soccer is also seen as inherently a man’s game. Although Turkish women have laudable basketball and volleyball leagues, pursuing soccer professionally required a certain bucking of conventional norms.

In the UAE, a campaign was launched in 2009 to expand women’s soccer in the country with the goal of starting a women’s soccer league by 2012. They reached that goal in 2012 with “The Budding Talents” development project. Beginning in Abu Dhabi, the league features sixteen teams from U-13 to U-16 and has recruited over 2000 girls. The UAE national team competed in the qualifiers for the AFC Women’s Asian Cup for the first time in 2017.

Even in countries that show progress by forming a soccer federation, registering members, and traveling for games, the five barriers are ever-present as exemplified by Afghanistan. While not part of the Middle East, the case of the neighboring country is sadly not unique, but glaring in abuses against the players highlighted in recent media reports.

The President of the Afghanistan Football Federation (AFF) and five other soccer officials are accused of sexually assaulting members of the women’s soccer team. Using their positions, as well as a combination of sexual violence, mental, and physical abuse, the officials subjugated the women into submission. Players have come forward with horrific stories of the AFF president assaulting them in a hidden bedroom in his office, sometimes two at a time, and then publicly humiliating them by calling them “lesbians.”

Throughout the abuse, officials claimed that if the women came forward their families would be ruined or harmed, they would be kicked off the team, or they would bring shame upon themselves and their families. The AFF president also forced players to sign contracts that prevented them from receiving independent sponsorships. Despite the threats and fear they instilled in the women, players came forward and filed claims against the AFF president and other officials involved in the years of abuse. In December 2018, FIFA suspended the AFF president and other officials. It is frustrating to see the progress made by women in soccer only to have them abused by men in positions of power.

In some countries in the Middle East, even spectating soccer games is an almost insurmountable task for women. The two countries in the Middle East that actively discouraged and discourages women from watching men play soccer are Saudi Arabia and Iran. For the first time in its history, Saudi Arabia allowed women to watch men play soccer inside a public stadium in January 2018. Although the stadium was not initially built to accommodate female attendees—missing private sections, female bathrooms, and prayer areas—the hiring of new female ushers showcased a permanent family section for women. On social media, some Saudis applauded the inclusion of women while others criticized the move and claimed that women belong at home caring for their families and preserving their faith.

Before the 1979 Revolution, Iran had a women’s national soccer team that did not don the hijab. A new women’s national team was formed in 2005, but controversy about the gender of players arose in 2015. Since the Revolution, women have not been allowed to watch soccer in public stadiums and oftentimes resort to dressing like men to sneak in. In October 2018, women were allowed to attend a soccer match at a public stadium for the first time in the history of the Islamic Republic of Iran. Unlike Saudi Arabia, this was a one-time exception and it is unlikely that women will be allowed to attend in the near future.

Although most Middle East countries have at least a women’s national team or a U-19 team, most do not enter or do not qualify for the World Cup. Teams either lack adequate funding or have incomplete rosters. To qualify for the World Cup, they need to place highly in the Asian Federation Cup (AFC) the year prior. The AFC qualifying countries for the Women’s World Cup 2019 were Australia, China, Japan, South Korea, and Thailand. The women’s national teams are internationally ranked sixth, sixteenth, seventh, fourteenth, and thirty-fourth respectively. Multiple Middle East teams tie in rank for last place. Clearly, there is still a lot of work to be done.

Before the opening match of the FIFA Women’s World Cup 2019, a memorandum of understanding (MoU) was signed between FIFA and the United Nations Entity for Gender Equality and the Empowerment of Women (UN Women), the first of its kind. United Nations Under-Secretary-General and Executive Director of UN Women Phumzile Mlambo-Ngcuka said:

It will remove any barrier that prevents us from reaching the hearts of young girls. Sport brings them happiness and inspires them to go out and replicate what they see on the pitch. It is said that you always remember how someone makes you feel more than what they say, and sport arouses feelings. That is why it is such an important platform.

Mlambo-Ngcuka is linking gender equality and soccer. Soccer is widely viewed as a worldwide equalizer. Players on the pitch have their feet and a ball to work with. Ensuring that women and girls are a part of that experience is pivotal. This is arguably the main reason for resistance of the inclusion of women in the Middle East where women’s rights are seen as a threat to the status quo. Allowing leniency or equal treatment on the soccer field could translate to equality elsewhere and that is what especially terrifies the patriarchal leadership of Middle Eastern countries.

Sheva Tabatabainejad is an intern for the Rafik Hariri Center at the Atlantic Council.  She graduated from Georgetown University in 2019 with a Master of Science in Foreign Service. You can follow her on Twitter @Sheva_Tab.

Rana Abdulhadi is an intern for the Rafik Hariri Center at the Atlantic Council.

Leah Hickert is an intern for the Rafik Hariri Center at the Atlantic Council and contributed to the infographic data and design.