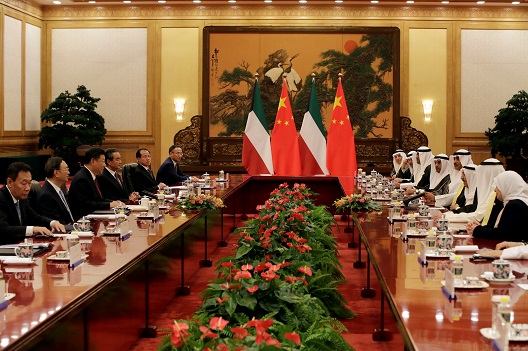 Promises made by Chinese President Xi Jinping at the biennial Belt and Road Forum about opening the Belt and Road Initiative to multilateral and third-party investment could bode well for Gulf-China relations and the Middle East more broadly by creating new opportunities for energy and economic cooperation.

Heading into last month’s Belt and Road Forum (BRF), Xi Jinping’s signature foreign policy enterprise, the Belt and Road Initiative (BRI), was facing heavy criticism for several reasons, including that the projects are limited to Chinese companies and investment. The BRI, announced in 2013, is a trillion-dollar investment plan to connect most of the world via investments in infrastructure, digital technology, and space technology, particularly the construction of ports and roads across Asia, Europe, and Africa.

This year’s BRF was focused on rebranding the BRI and addressing much of the criticism. Xi Jinping addressed many of the complaints himself in a speech, during which he made several promises to improve the BRI. One of those promises was to open the BRI to non-Chinese financing, saying “We welcome the participation of multilateral and national financial institutions in BRI investment and financing, and encourage third-market cooperation. With the involvement of multiple stakeholders, we can surely deliver benefits to all.”

While this is good news for all those interested in the BRI, this is particularly good for China’s already growing relations with Gulf Cooperation Council (GCC) countries.

When it comes to Chinese-Gulf relations, the main aspect that comes to mind is the energy relationship. In 2015, GCC countries accounted for about a third of Chinese energy imports, but there are increasing non-energy ties as well. As China’s 2016 Arab Policy Paper lays out, energy cooperation is the core of the relationship, but infrastructure construction and trade and investment facilitation form the “two wings” of the relationship. This is reflected in available data, as bilateral trade has increased from $10 billion in 2000 to $115 billion in 2016 and bilateral investment has more than doubled. Additionally, China has invested hundreds of millions of dollars into port cities like Duqm in Oman and Abu Dhabi in the UAE. The opening of the BRI to external investment will cause these ties to grow even more.

This opening will allow Gulf countries to increase their involvement in the BRI, which several have already voiced interest in doing regarding its China-Pakistan Economic Corridor. Saudi Crown Prince Mohamed Bin Salman has already signed an agreement for a $10 billion refinery and petrochemicals complex in the Pakistani port of Gwadar which China is developing and could be one of many similar deals. The UAE and Saudi Arabia have also set up their domestic economic plans to partner with the BRI.

More diversified investment in BRI projects will make countries less beholden to Chinese debt, therefore undercutting many of its critics who argue that the BRI is “debt trap diplomacy” meant to expand China’s geopolitical influence. Increasing cooperation with the Gulf countries will also increase the input of local players who have a better understanding of the situation on the ground, something that has been a problem for the BRI. Greater partnership with the Gulf countries would also limit competition with them for investment opportunities, bolster the BRI against its growing competition, and maintain the BRI’s growth as China is less able to do so on its own.

Gulf financial cooperation would also lend support to China’s efforts to increase stability in the Middle East through its belief in security through development. At the China-Arab States Cooperation Forum in July 2018, China pledged $23 billion in loans and aid to Arab states, much of which is to support reconstruction and humanitarian efforts in countries like Syria, Yemen, and Jordan. China is already positioning itself to take the lead in reconstructing Syria, having pledged $2 billion to build an industrial park there, amongst other measures. This effort supports China’s economic interests in Syria, which pre-date the Syrian civil war and include shares in Syria’s largest oil producers.

Considering the warming ties between the Arab world and Syria, it is quite possible that the Gulf countries would be prepared to partner in this effort for economic and stability reasons, but also to undermine their rival Iran’s influence there. Both China and the Gulf countries are increasing their engagements with Iraq. For example, a Chinese official declared, “It is our country’s duty to provide support to Iraq and to contribute to the reconstruction of cities liberated (from ISIS).” Meanwhile, Saudi Arabia is also expanding its economic ties with Iraq.

Closer ties with the GCC will further cement Chinese access to their energy supplies to fulfill its expanding energy needs, as China is estimated to account for 43 percent of the global increase in oil consumption over the next decade.

For the US, these outcomes are a mixed bag. A higher quality BRI would provide greater benefits to the countries involved, improve economic development, and help solve the global infrastructure shortage. On the other hand, they would increase China’s leadership role and soft power, which the US opposes due to its rivalry with the rising power. If Gulf-Chinese cooperation extends to Syrian reconstruction, it would also undermine US efforts to isolate President Assad until he accepts a political resolution to the Syrian civil war.

However, all of this assumes China follows through on Xi’s promises. Even before the Belt and Road Forum, China had already started making efforts to improve the quality of the BRI by issuing new directives to companies to pay greater attention to financial, environmental, social, integrity, and other risk factors. In the weeks leading up to the BRF, China also reduced the price of a Malaysian railway by one third and canceled all interest-free loans it had advanced to Ethiopia through the end of 2018.

But even Chinese-based experts have their doubts about whether China will be able to adjust its policies in a way that is satisfactory to the West. It does not help that Xi Jinping and China as a whole do not have the best track record for keeping the kind of promises made at the BRF, as they have violated past promises and agreements to limit intellectual property theft, to curb economic cyber-espionage, and to not militarize artificial islands in the South China Sea.

It would be odd though for China to let the BRI’s problems fester, considering its importance to China. After all, the BRI was incorporated into the Chinese Communist Party’s Constitution, and plays an integral part in China’s domestic economic plans and foreign policy.

Whichever direction the implementation of the BRI takes, Chinese activity should be closely monitored to see if current actions represent a true change in behavior in line with Xi’s promises or are merely exceptions to the rule.

Dan Katz is an independent researcher interested in China’s engagement with the Middle East.