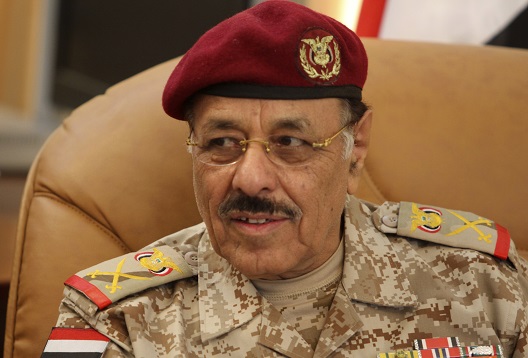 Yemeni President Abdrabbo Mansour Hadi, currently residing in Riyadh, has appointed General Ali Mohsen al-Ahmar to the post of Deputy Commander of Yemen’s Armed Forces—in essence giving him official command of the portion of Yemen’s military still loyal to President Hadi. Always one of Yemen’s top generals, Ali Mohsen was for years considered Yemen’s strong man, second in influence and power only to former president Ali Abdallah Saleh. Since 2012, Ali Mohsen played a behind-the-scenes role as military counselor out of offices in Riyadh. Hadi, in pulling him out of the shadows, is betting the aging general can unite tribal and southern anti-Houthi forces for a final battle to retake the capital Sana’a.

Saudi leaders, who have had a longstanding relationship with Ali Mohsen, hope a strong military hand would not only win the war on the ground, but also help put Yemen’s state back together in the aftermath. While a potentially a clever tactical move, Hadi risks being sidelined by Ali Mohsen if and when his forces retake Sana’a. The subsequent military and political challenges facing Ali Mohsen will also likely frustrate the Saudi hope for stability along their southern borders; tribes and factions in both northern and southern Yemen deem the general’s reputed ties to conservative Salafi forces unacceptable. Even a takeover of the capital will not pacify the country under his leadership. In Yemen, creating stability out of chaos via a man on horseback may be a remedy whose time has come and gone.

Between 2004 and 2007, the US Embassy in Sana’a viewed Ali Mohsen himself as a leading contender to replace then-President Saleh, should the position fall vacant due to the sudden death of the president or to prolonged chaos resulting from a popular revolution. US diplomats presumed that Ali Mohsen could rally the loyal support of the military and politicians in both the ruling GPC and opposition Islah party. Ali Mohsen appeared to have all the skills that kept his longtime friend and boss Saleh in power: corruption, smuggling networks, tribal alliances, and a loyal armed forces. The mutually beneficial alliance between Saleh and Ali Mohsen created an equilibrium to ensure that Ali Mohsen would not challenge the presidency, but he stood ready to take over in the event the position became vacant—a possibility that worried Saleh who preferred the succession of his son Ahmed Ali to power.

In the aftermath of the uprising, circumstances did not favor either of the two strongmen. Saleh found himself out of office and with no way to influence the course of events other than to jump into bed with the Houthis, his bitter enemies in the six-year war preceding the uprising. General Ali Mohsen cast his lot with the opposition, but the odd combination of old opposition leaders in Islah and the young uprising leaders failed to win political or military power in the pre-Hadi transition period. Ali Mohsen also found himself surrounded by competitors from within the opposition in the form of the sons of Abdallah al-Ahmar, the longtime leader of Islah who passed away in 2007. Eventually, a Gulf Cooperation Council (GCC) transition plan supported by the United Nations empowered then-Vice President Hadi to step in as an interim-president and ultimately the elected president of Yemen. Ali Mohsen, sidelined by events, went to Riyadh to play a role in directing ground operations against the Houthis from behind the scenes.

Two factors now bring Ali Mohsen out of the shadows: a war that has dragged on too long and the need for someone to unite the diverse military factions for a decisive win against the Houthis. Two important battles loom in this regard, the one for Ta’iz, Yemen’s third-largest city, and the one for Sanaa, the nation’s capital. The Houthis have laid siege to Ta’iz for months. Anti-Houthi forces have held out in the city center, but Saudi-led forces have not yet succeeded in breaking the siege. The battle for Sana’a, symbolically and strategically critical for a final victory, has yet to begin and poses a major challenge for the array of disparate forces poised to attempt the literally and figuratively uphill battle. The day after a theoretical victory remains just as uncertain. With Yemen’s old military broken and anti-Houthi forces cobbled from various regions, factions, and sundry contributing nations, the ability to hold the country together would require a new military and a new security structure. Further, there would be an urgent need to roll back the gains made by al-Qa’eda in the Arabian Peninsula (AQAP) and the Yemen branch of the Islamic State (ISIS or ISIL), forces that now control a large chunk of territory in the south and may gain even more territory if allowed to have a hand in defeating Houthis in Taiz and Sana’a.

Ali Mohsen, however, has critical flaws. In addition to arms merchants and fuel smugglers, he has had questionable dealings with extremists throughout his career, connections that made him powerful in the context of traditional Yemeni politics. Yet the same qualifications that made him strong in the past hamstring his current bid to power. The bulk of Yemen’s armed forces, especially the Republican Guard, have gone to Saleh and the Houthis. Militarily, what remains of the old military would not be sufficient to win the war and keep the peace afterwards. Politically, the Southern Hirak Movement regards Ali Mohsen as another strong man from the north, who brought northern Salafi groups to the south—an unwelcome figure to rule over them once again. In a similar vein, the Houthis consider Ali Mohsen a mortal enemy for his role in six years of war against them and his support for a Salafi school implanted in their capital Saada to propagate an unwelcome brand of Islam among them. To the extent that a post-war reconciliation is possible, the general is the wrong man for the job. Even the tribes in Marib and Hadramawt would refuse to fall subservient to another strong man’s rule and would demand a different power-sharing arrangement that would likely exclude Ali Mohsen.

The young civil society leaders who started the uprising in 2011 sought to upend authoritarian rule in favor of a modern democracy, one that eschews corruption and enshrines the rule of law and respect for human rights. With his renowned Salafi leanings and attachment to a more radical Islamic political agenda than Saleh ever had, Ali Mohsen at the helm would signal a return to a past that the country’s secular youth have clearly rejected. While he may win a few battles for the Hadi government, Ali Mohsen is the wrong political choice to bet on to help Yemen transition to a better more democratic future.

Image: General Ali Mohsen al-Ahmar is seen during a meeting with U.N. special representative of the Secretary-General for Children and Armed Conflict Leila Zerrougui in Sanaa November 27, 2012. (Reuters)