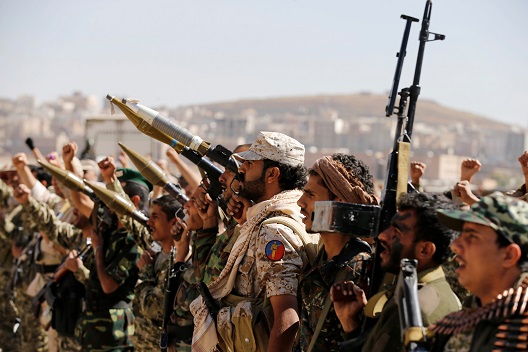 It has become blatantly obvious that the Yemen tragedy will not end unless Riyadh decides to unilaterally cease fire and call for a peace roundtable, preferably in a neutral location such as Muscat or even Geneva. Washington could be a catalyst by prodding Saudi Arabia to put diplomacy first and becoming fully engaged in the effort. The prospects of that happening, however, are not good. It may be time for the Yemeni warring parties to take the initiative and, ignoring all regional and international chatter, launch an independent peace initiative to end the conflict once and for all. Yemeni President Abdrabbo Mansour Hadi could make himself the unlikely national leader by making such a call or continue on his current path of total irrelevance.

Saudi Crown Prince Mohamed Bin Salman (often referred to as MBS), in an interview with Tom Friedman, reportedly said that pro-Saudi forces in Yemen control 85 percent of the country, but that anything less than 100 percent was still problematic. A recent White House statement called for opening the borders to allow humanitarian aid shipments and political negotiations to resume. The statement, however, said nothing of ending the US role in the blockade imposed on Yemen, promising to defend Saudi Arabia from Iran’s provocations.

The Yemeni players in this tragedy could—and should—take matters into their own hands. After all, this is where it all began. Yemeni youth, hoping to end a corrupt and authoritarian regime, joined their brothers and sisters in the protests that erupted during the Arab uprisings of 2011. Their sheer will and popularity with Yemenis from all walks of life led to the abdication of Ali Abdullah Saleh and to the now defunct National Dialogue Conference (NDC) of 2013. The conference, coupled with Gulf Cooperation Council mediation, led to the installation of Abdrabbo Mansour Hadi at the head of transitional reconciliation government. The failure of this reconciliation—and the Houthi takeover of Sana’a—led to Saudi Arabia’s military intervention, which feared Iran’s influence behind the ascending Houthi movement allied with and empowered by former president Saleh.

The NDC process was flawed from the start. For all its participants (over 500 members), it failed to build the necessary consensus among the principal players in Yemen on a power-sharing framework that could have led the country to a more prosperous future. A difficult task in 2013 has become even more so today with the rising number of players, militias, and foreign armies. Nevertheless, a reconciliation effort can still stave off the literal decimation of the Yemeni people.

The powerbrokers
The main Yemeni players in this tragedy appear equally matched. The Houthis and former president Saleh, while not always united in their goals and strategies, dominate the north militarily. Together, they wield more than 100,000 fighters and an imposing arsenal of stored weapons, artillery, and rockets. There can be no peace without their full cooperation.  By now, however, both recognize their overreach in trying to take over the whole country in 2014. To boot, the two are currently engaged in a deadly internecine fight that could destroy the capital city if not soon checked. At best, and after several more years of conflict, the Houthis might hope to be the last force still standing in Yemen and could presumably rule over the rubble and devastated population: not a happy prospect, given that none of their fellow Arabs would recognize and accept them into the Arab fold.

Ansar Allah, the Houthis political party, lacks sophistication, organization, and leadership. They do, however, form an integral part of Yemen and have as much interest in a fair peace deal as anyone else. If this war has shown them anything, it is that they will have to give up on any dreams of conquest that some of their hardliners may still entertain. A fair deal would grant them autonomy within their region, fair representation in any future government, and a fair share of the economic benefits of a peaceful union.

Former president Saleh, though militarily weaker than the Houthis, still commands the loyalty of thousands of troops and millions of supporters within the largest political party in Yemen, the General People’s Congress (GPC). As the most recognizable figure in the country, he could still win any new fair and free election for president. His time, however, has come and gone. Nonetheless, he may insist on a say in any new national dialogue and should—at least via a GPC representative—be granted a seat at the table. Saleh could facilitate, rather than complicate the birth of a new government, but new leaders must take the reins and his old elite benched if the GPC hopes to regain the public’s trust.

Islah and the Joint Meeting Parties with which it is affiliated have long served as a loyal opposition to Saleh. Militarily, they played a role in resisting the Houthi takeover of southern Yemen. Their old leadership, however, has atrophied and can no longer contribute to a new path forward for the country. They can designate youthful representatives, but should not seek to place their old guard in any future government.

The secessionist movement known as Hirak, founded in 2007, boasts the loyalty of several million southerners yearning for independence and willing to fight for it. All told, a considerable force, though fewer than 100,000 men, fight under the banner of Hirak (and/or Hadi). Split into anywhere from six to nine factions, however, Hirak cannot hope to build a separate state without significant Arab Gulf support, which would deprive them of the independence they desire. The Southern Transitional Council (STC) led by former Aden governor Aidarous al-Zubaidi has yet to merge the various Hirak factions. Uncertain support from the United Arab Emirates (UAE) and Saudi ambivalence to an independent south has further frustrated his efforts. The UAE-armed Security Belt force (al-Hizam), makes for an uncertain ally as it pursues its own self interest and has been implicated in intimidation, assassination, and other human rights violations. Add to that odd mix the fighters from al-Qa’eda in the Arabian Peninsula and ISIS and you have a combustible situation in the south.

Politically, Hirak leaders agree on an independent southern state, but differ on tactics. Some call for unilateral secession, others a referendum, and others a negotiated secession with Hadi and the northern government. Ultimately, President Hadi will need to convince these leaders that a better future lies in reconciliation.

The Peace Effort
The NDC, the United Nations, and Kuwait have pushed the contours of a peace plan for some time: a decentralized system based in Sana’a that grants local officials autonomy in cultural affairs and administration. Ideally, the legislature would have two houses, with representation based on regional geography in one and on political party and individual competition in the other. The system would thereby grant each region equal representation in one house and allow for political competition in the other. The details of the federal system would have to be renegotiated, including the specific division of authorities between the central government and regional states. In any case, all sides would discard foreign alliances as part of the settlement.

A handshake on a broad deal is needed upfront by the main power brokers: Abdel Malik al-Houthi, Ali Abdullah Saleh, and Muhammad al-Yadumi from the north; Aidarous al-Zubaidi, Hassan Ba`aum, and Haidar al-Attas as principals from the south. These leaders, however, should derive actual negotiators and future candidates from their second tier contender pool and independents to prevent the reanimation of failed old guard figureheads, who have collectively perpetuated this war. Each party should encourage young men and women to represent them—or at least give them their blessing to negotiate on their behalf. Preferably, representation involving only one delegate and two alternates for each party would avoid the cacophony that overwhelmed the NDC.

By calling for national reconciliation independently from his Saudi patrons and offering to forego a future leadership role, President Hadi may yet prove himself relevant (albeit in a transitional sense). Calling for a purely Yemeni path to reconciliation would allow him to support the notion of legitimacy and provide him an avenue for a graceful exit. As respected independent Yemeni voices emerge to lead the negotiations under the purview of the UN Special Envoy, Hadi could potentially carve out a place in history as Yemen’s saving grace.

Nabeel Khoury is a nonresident senior fellow at the Atlantic Council’s Rafik Hariri Center for the Middle East. Follow him on Twitter @Khoury_nabeel.