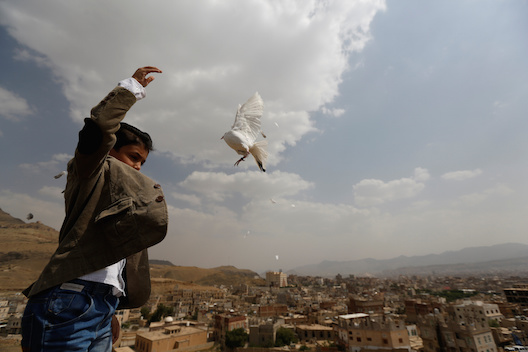 Representatives of the government and Houthi delegations to the peace talks in Kuwait announced that they were suspending the talks until the end of Ramadan in mid-July.  The process had effectively stalled even as UN special Envoy for Yemen Ismail Ould Cheikh Ahmed expressed cautious optimism last week about the Yemeni peace talks underway in Kuwait since April.  He described a “positive” general atmosphere in which the talks have progressed “slowly, yet constructively.”  Despite limited results—reaching agreements only on the broad need to end the conflict and on the release of some prisoners—a return to the negotiating table in a few weeks holds more promise for Yemen than not talking.  The envoy has presented the parties with a practical plan—a roadmap—to bring an end to the conflict and move into a new phase of negotiating a new government for the country.  The details of the plan have not been released, but the main obstacle to advancing the talks appears to be less disagreement over the substance of the plan, and more the sequencing of the steps.

The plan would implement UN SC 2216, which calls for the Houthis to halt their military activities and handover heavy weapons.  In effect, it calls for a full surrender of the Houthi rebels and their ally, former president Ali Abdullah Saleh.  The exile government of Abdo Rabbo Mansour al-Hadi maintains its insistence that both a full Houthi withdrawal from lands seized since 2014 and their disarming of heavy weapons must take place before advancing to discuss other issues, such as the construction of a transition process or the inclusion of other voices.

The Houthi delegation insists that the talks reach an agreement on a consensus president and national unity government prior to any security agreement.  They also insist on a guarantee of being included through the transition process before even considering disarming.  While the Houthi-Saleh forces and the Saudi-led coalition have engaged in atrocities and caused thousands of civilian deaths, the Houthis are not wrong in their concern that implementing UN SC 2216 first will likely result in a privileging of Saudi and Gulf preferences at the expense of diverse Yemeni voices. If the Houthis disarm and withdraw before the next steps are negotiated, they would effectively have no bargaining position to insure that the transition process to create a new government would be inclusive of their concerns.

The situation in Yemen is dire, and it will only deteriorate without progress in the talks. On April 10, the parties implemented an agreement to cease hostilities. While some areas saw a diminishing of fighting, serious violations on both sides have occurred. In his recent statement, the UN envoy pointed in particular to the June 4 shelling of a market in Taiz that resulted in 18 civilian deaths, and to violence in al-Jawf, Marib, and along the border with Saudi Arabia. In its June 2016 report, Yemen: Health Overview, the United Nations Office for the Coordination of Humanitarian Affairs (OCHA) reports that more than 31,000 Yemenis have been injured and nearly 6,500 have died, including 934 children, from the start of the war in March 2015 through May 2016.

On Wednesday, the UN also announced that come August, it would no longer be able to continue its current level of food distribution in Yemen—which already falls far short of needs.  OCHA head in Yemen, George Khoury, said that about half of the population—some 14 million—was suffering from food insecurity at the “crisis” or “emergency” levels.

With the UN already struggling with inadequate funds to assist Yemenis, Saudi Arabia reportedly threatened to cut funding to the organization after it was included in the Secretary General’s annual black list of states and military groups that failed to protect the lives of children.  Riyadh is a major donor to the UN, and was accused of threatening to sever aid to the organization if its name was not removed.  Another rumored threat reported by Reuters was that the UN might face a fatwa, or Islamic legal opinion, declaring the organization to be anti-Muslim.

Although Riyadh denies that it made such threats, UN Secretary-General Ban Ki-moon described as “unacceptable” the pressure from the kingdom and a few other Arab and Muslim countries to have Saudi Arabia name’s removed from the blacklist pending joint review of the charges that children had not been protected. The Secretary-General, however, acquiesced and agreed to temporarily remove Saudi Arabia. These actions were not unprecedented.  As recently as April, the kingdom reportedly threatened to sell off billions of dollars of US assets if Congress passed a bill allowing the kingdom to be sued in US courts for any role in the September 11, 2001 attacks on the United States.  The bill passed anyway, and Riyadh has yet to follow through on its threats.

Meanwhile, Amnesty International described Ban’s move as “blatant pandering” that undermined the UN’s efforts to protect children in conflict zones. But an alternative reading of Ban’s temporary removal of Saudi Arabia from the list is that it publicly exposed Riyadh’s efforts to threaten the organization.  At a time when willingness to criticize the kingdom seems to be increasing, Ban’s acquiescence revealed Saudi efforts to pressure anyone that draws attention to its human rights record.

On June 16, the US House of Representatives narrowly defeated a bill to ban the sale of cluster munitions to Saudi Arabia as a result of the documented civilian deaths caused by them in the Yemeni war.  The close vote, and the passage of the 9/11 bill, signal a new willingness to openly question Washington’s relations with Saudi Arabia.

At the Yemeni peace talks in Kuwait, Hadi and his Saudi backers show no signs of feeling pressure as from the increased negative attention toward the kingdom. Their demands have not changed and they, like the Houthis, continue to violate the ceasefire. But if the sides return to the talks following Ramadan even as they disagree on the sequence of steps ahead, that alone is a positive step for Yemen. No transition process or more inclusive power-sharing arrangement can happen until the war ends.

Jillian Schwedler is a nonresident senior fellow for the Atlantic Council’s Rafik Hariri Center for the Middle East.

Image: A boy releases a dove as part of a campaign to push Yemeni negotiators to in Kuwait to reach a peace agreement, in Sanaa, Yemen June 29, 2016. (Khaled Abdullah/Reuters)