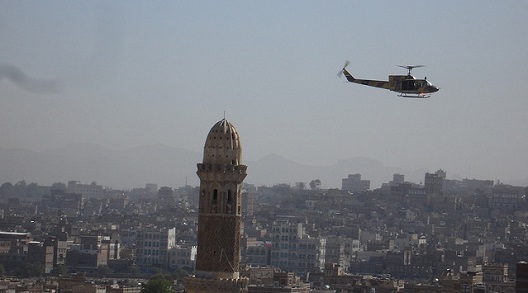 US drones and Yemeni counterterrorism forces recently killed more than three dozen militants in Yemen linked to al-Qaeda in the Arabian Peninsula (AQAP) in one of the largest counterterrorism operations to take place on Yemeni soil in years. At least sixty-five suspected terrorists were killed in both land and air operations. At least three airstrikes were carried out as part of the assault, which targeted a convoy and in remote training camps in southern Yemen. US government officials say the militants were planning to attack civilian and military facilities. The attack came just days after CNN aired a video showing many suspected al-Qaeda militants gathered together in South Yemen. But what this offensive severely lacks is a comprehensive solution to the drivers of militant activity in Yemen.

South Yemen has, in recent years, been a hotbed for AQAP and other militant activity, but it is essential to understand the roots of these troubles. In the town souk in Jaar, shopkeepers recently grappled for the trickle of pedestrians making their way down Nasser Street, the town’s main strip, while woodsmen cut and sanded new pieces of furniture for local residents looking to rebuild their modest homes.

Not two years ago, Jaar, in Yemen’s Abyaan governorate, was the scene of callous bloodshed as security forces, stretched thin battling nationwide pro-democracy protests looking to oust now-former President Ali Abdullah Saleh, vowed to rid the region of al-Qaeda infiltration. Poorly trained, heavy-handed security forces attacked insurgents that had used the political instability as an opportunity to bolster their presence, engaging in a brutal war that crushed local villages and killed many innocent civilians in the crossfire. Instead, the military pushed many of those militants deep into the mountains for incubation, while the violence sparked a mass exodus of impoverished civilians, many of whom remain internally displaced today.

Yemen’s militant activities, while not exclusively to the South, developed amid the turbulent political backdrop that colors North-South tensions after the two Yemens were united in 1990. The country’s brutal 1994 civil war left a major psychological rift between the opposing sides in the absence of reconciliation talks. Northerners – particularly those loyal to then-President Saleh, also received privileges in terms of access to power, land, and jobs.

Yemen’s National Dialogue Conference (NDC), aimed at constructing a political roadmap, including a new constitution, wrapped up in January amid nationwide calls to revitalize Yemen’s failing economy and address the dire humanitarian crisis. According to the World Bank, 54.5 percent of Yemen’s population was living below the poverty line in 2012, up from 42 percent three years earlier. More than 10 million people—nearly one-half the population—lack sufficient food; 12 million lack access to clean water; and 1 million children are malnourished, according to the World Food Program.

In a statement last week to journalists, Yemen’s current President Abdrabbo Mansour Hadi advised the Minister of Finance to raise government revenues particularly in the areas of electricity, water, taxes and customs; all the while combating the roots of corruption and holding violators accountable. He highlighted that thirty-six oil and gas companies pulled out of Yemen due to crumbling security. Southerners blame the central government for turning its back on security – particularly in Abyaan province, the scene of last week’s joint counterterrorism operation.

For many in the South, government neglect has been a major source of disenfranchisement, while the use of US drones and the Yemeni military has helped militant groups looking to play on these sentiments. In his statement this week, President Hadi noted, “militants from all over the world flocked to Yemen.” There are signs that, for some recruits in Yemen, their incentive to join Islamist groups like al-Qaeda are not ideological.

As military operations increase in the southern governorates, as many believe they could, the more productive option for winning hearts and minds is to seek reconciliation. Severe government neglect and dwindling resources, including declining water, soaring unemployment and rapid population growth – issues often at the heart of domestic conflicts – are becoming blurred as the government wages a war against these groups that supposedly represent a radical Islamist position. Resources including electricity, water, and gas are scarce and coming under increasing pressure. Many remote areas from Khawlan to Rada’a to the southern governorate of Abyaan have little-to-no access to healthcare or proper education, fueling further resentment against the state.

To avoid an unnecessary escalation of violence in Yemen, it is imperative that the Yemeni government look to avoid the use of foreign drone and military force when possible. Tribesmen have repeatedly sought to help government officials track down al-Qaeda militants and make arrests in some less-volatile parts of the country. The government should make this a priority to avoid unnecessary casualties, and arresting and interrogating suspected militants would be a productive approach to intelligence gathering. Compensation must be paid to the families of innocent victims of drone and air strikes to avoid retaliatory violence. Finally, addressing the humanitarian crisis in Yemen, while boosting education and job prospects for younger generations, would inevitably deter many young men from taking desperate – and violent – measures as a means for survival. Al-Qaeda often offers some form of compensation to the families of its fighters. The Yemeni government – with the help of the United States and its other allies – must give these young men more incentive to live a productive and peaceful life.

Vivian Salama is an independent journalist focused on issues in the Middle East and North Africa. Her work has appeared in Newsweek, Daily Beast, Al Monitor, The Atlantic, Columbia Journalism Review and more.