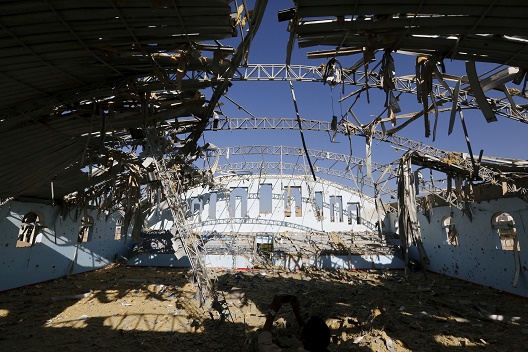 Less than a year after Saudi Arabia launched its war to restore former Yemeni President Abdrabbo Mansour Hadi to power, it has retaken enough control of Aden for Prime Minister Khalid Bahah and his cabinet to return after months in exile. Bahah and other cabinet members posted selfies on social media to prove their presence in the country. Few Yemenis are celebrating, however. Hadi enjoys little popular support inside Yemen and Bahah’s recent praise of Saudi Arabia’s role in Yemen has led many to conclude that he may not be as different from Hadi as many had hoped. Few see the government’s return as a turning point in the war, particularly as the bombings continue.

The situation in Yemen understandably feels hopeless to many Yemenis, who have suffered through nearly a year of war. International organizations have expressed alarm at the human rights situation and ceasefires have failed to hold long enough for significant humanitarian supplies to reach the people who needed them. Hospitals are barely functioning, while Saudi-led coalition strikes have “mistakenly” bombed several medical facilities, including three run by Doctors Without Borders. The Houthis are no better, with their siege of Taiz preventing Yemenis from even reaching medical facilities.

The talk in Washington and the media has largely framed the war as a proxy struggle between Iran (supporting the Houthis) and Saudi Arabia (supporting Hadi), a battleground for the new Cold War in the Middle East and the latest frontline in Muslim sectarianism. But this view obscures the legitimate concerns of many Yemenis over their exclusion from a transition process that was promised to be inclusive. Talk of Iranian-Saudi rivalry also treats the plight of the Yemeni people as a secondary issue: Yemen is seen as important only because of its role in larger problems—be that the Iranian-Saudi rivalry or the spread of Islamist extremism. The Yemeni people figure only peripherally in such perspectives.

How can the international community reconcile the concern for millions in Syria and Iraq while paying minimal attention to the lives of 26 million Yemenis? Part of the problem relates to relatively little coverage of the war in Yemen. Journalists face enormous difficulty in traveling to the country and few have any extended experience there. Still, many online voices from Yemen offer a full spectrum of political perspectives.

A larger reason behind such disregard stems from Yemen’s image problem. In much of the Arab world, Yemenis are treated as embarrassing, dumb relatives. Their clothing, tribal daggers, high illiteracy, and extreme poverty contribute to an Orientalist image of a land and people untouched by time. Tribal groups and jihadists frequently kidnap foreigners to use as bargaining chips, releasing them after obtaining funds or services from a central government that often denies that such negotiations took place. The spectacular architecture and ancient sites, combined with more than 60 million weapons in civilian control, suggest to outsiders that Yemen is the Wild West of the Arabian Peninsula: exciting and exotic, but also dangerous and lawless.

While Yemen is celebrated as a world cultural heritage site, Yemenis are not celebrated for having both built and maintained them under near-impossible circumstances. Instead, they treated as backward or retarded (in Arabic, mutakhallafin). They are often vilified for “not joining the twentieth century,” as a Jordanian friend once framed it. The separation of celebrated Yemeni heritage sites from the actual Yemeni people has a corollary in the policy view of Yemen as a rogue or failed state. After the 1990 unification of the north and south, the Yemeni state never established full sovereignty over all of its territory, nor did the central government seek to crush other centers of power—presumably because it knew it could not succeed. Rather than a failed state, Yemen functioned through a formula of decentralization, with multiple state and non-state actors balancing interests for stability, but with no single dominant power center. This formula created problems for centralized states structured to engage with similarly centralized states. Foreign relations and trade are complicated if not impossible when a government cannot reasonably provide assurances that agreements will be honored.

These two perceptions—that the Yemeni people are backward and that the Yemeni state is weak—create the justifications for assuming that Yemen cannot resolve its problems on its own. At the very least, according to this formulation, its people and thus its problems must be contained.

Real political solutions are possible, but they demand a lens that rejects the image of a Yemeni Wild West for one in which Yemenis are given a central role in shaping their future. This can only happen when all parties accept that the conflict stems from legitimate concerns expressed by numerous political groups in Yemen. The return of Bahah and his cabinet to Aden will not mark a turning point for the country until the broader political field is directly and adequately represented, as they were in the Transitional Council. Unfortunately, Saudi Arabia seems little interested in a solution that does not result in a Hadi-led government. The Houthis and deposed president Ali Abdullah Salih, for their part, have little to gain by ending the conflict. Under these conditions, the unfortunate images of Yemen as a failed state and of Yemenis as unable to govern themselves will likely continue.