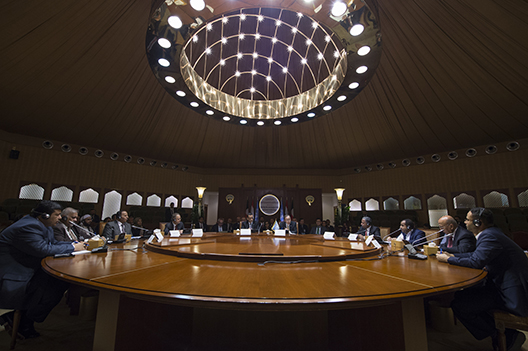 The month-long break in UN-facilitated Yemeni peace talks announced on August 6 wasn’t a surprise; indeed, it was preordained and widely expected. But this doesn’t make the relative breakdown in the negotiations any easier for the international community and the UN Security Council to stomach.  UN Secretary-General Ban Ki-moon has called upon the parties to renew “without delay” cooperation with his special envoy, a testament to his repeated belief that further military conflict will only delay the inevitable political solution that is required to end the conflict.

Speaking to reporters after his latest consultations with the Houthis, the General Peoples’ Congress, and the internationally-recognized Yemeni government, UN Special Envoy Ismail Ould Cheikh Ahmed commented that the mere fact that the parties remain engaged in the process should be looked upon as a positive development. “The…delegations,” Ahmed said, “have affirmed their commitment to the necessity of arriving at peaceful solution to end the conflict in Yemen.”  Everyone around the table, he argued, agreed that sustaining the April Cessation of Hostilities is integral to making the peace formula work, and that each of the delegations were receptive to the idea of going back to their political leadership to study the proposals that the UN formulated.  Although, seemingly in the same breath, he acknowledged that arriving at a sustainable resolution has proven increasingly difficult — even with the parties engaging in discussions over a period of months.

Ahmed’s words, however, put a somewhat positive spin on the glim reality of the humanitarian situation, which he described as “disconcerting, if not dangerous” but could be better labeled as catastrophic: that after eighteen months of warfare and the destruction of Yemen’s already dismal infrastructure and public services, Abd Rabbu Mansour Hadi’s administration and the Houthis continue to view the war as a contest of wills instead of the terrible plight it represents for their country.  There doesn’t appear to be any urgency from either side in resolving this conflict diplomatically, evident in the tit-for-tat responses to a UN peace plan that aims to bridge the divide over what a future administration should look like.  The decision by the Houthis and their allies to establish their own governing authority prompted the UN to call a month-long break in the negotiating process.  The violence over Sana’a that was previously limited thanks to the cessation of hostilities agreement resumed almost immediately — another illustration of how quickly both sides are willing to reach for the gun to press their advantage.

If the cessation of hostilities agreement signed last April served to create a small amount of trust between Hadi’s diplomats and the Houthi negotiators, the UN negotiating process has come to represent endless talks about who gets which position in a fairy tale transitional government, and circular discussions about which party needs to concede which points first.  Hadi remains absolutely convinced that the Houthis cannot be trusted to relinquish their arms once they are represented in a unity government.  The Houthis, in turn, view Hadi and his delegation as working at the behest of Saudi Arabia and the Gulf Arab monarchies, most of whom consider the Houthis to be allies of Tehran.

Comfortable in the thought that Saudi Arabia and the Gulf States will continue to expend military capital on the behalf of his administration, it appears Hadi remains convinced that he has the backing from his powerful neighbors to press his points on the battlefield.  Indeed, pro-Hadi forces undertook military offensives east of the capital Sana’a, backed by coalition airstrikes, just as negotiations came to an end on August 6. The resumption of airstrikes by Coalition forces come after a five-month lull, and recent attacks have included the bombing of a factory and an airstrike on a school that left ten children dead. Coalition Spokesman Ahmed al-Assiri, however, reportedly said the airstrikes targeted a Houthi training camp. A suspension of flights into Yemen by the Saudi coalition has meanwhile left the Houthi delegation stranded in Oman upon their return from the talks.

The Houthis, however, aren’t better in their disposition.  Their willingness to deploy starve-or-siege tactics on neighborhoods that support the government or oppose Houthi rule is a clear violation of international human rights and humanitarian law.  Houthi fighters have repeatedly launched mortars and ballistic missiles across the border into populated cities in southern Saudi Arabia.  Journalists and activists have been arrested at Houthi checkpoints and imprisoned for reporting abuses.  Ansd their depiction of Hadi as a weak puppet of the Saudi government who doesn’t have the respect and support of the Yemeni people is just as intransigent as Hadi’s feelings towards the Houthis

At present, the trust is simply not there for an agreement, and this dynamic is unlikely to change when the talks resume next month. In order for this state of affairs to change, the Security Council and those that possess some leverage on the warring parties need to treat Yemen’s civil war a priority.

It is past time for the permanent members of the UN Security Council to call a special session with the goal of passing a new resolution authorizing a new formula for peace — one that doesn’t play into the hands of either side and is the most likely to succeed over the long-term.  This means dispelling or modifying the terms in Resolution 2216, which calls on the Houthis to immediately and unilaterally surrender before discussions on a transitional government can proceed.  It also means strengthening the sanctions and arms embargo inspection authorities against any individual, commander, or military unit that the Secretary-General and the Special Envoy assess as an impediment to political progress towards a negotiated resolution — regardless of which side the perpetrator may be fighting for.

Other nations will also need to start enabling the Security Council with unilateral action of their own.  Countries that possess leverage over the warring parties must be willing to use that leverage towards the common goal of enabling a fair, equitable, and pragmatic resolution that will lead to new presidential and parliamentary elections. The alternative is letting the conflict drag on, continuing the status-quo of unconditional weapons shipments to the Saudi coalition, and outsourcing the problem to a UN envoy who is deadlocked between two parties that want all the power for themselves.