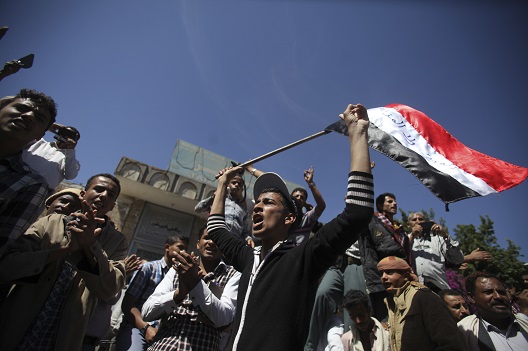 Last Sunday, armed men from Bani Dhabian, a prominent tribe from the northern Sana’a province set up a camp near the border Marib, an oil rich province in central Yemen. It was the third rallying point that local tribes had established in the province since last September to curb the advance of Houthis into their oil-rich region.

Brewing tensions between the Houthis, a Zaydi-Shia rebel group that overran Yemen’s capital, Sana’a, in September 2014, and tribes from traditionally Shafi’i-Sunni tribal territories in central and southern Yemen like those in Marib, threaten to tip this deeply unstable and strategically important country into a debilitating civil war. Nowhere is the potential for conflict more worrying than in Marib, the source of a large proportion of state oil and gas revenues and the bulk of the country’s electricity supply.

Since last December, thousands of armed tribesmen have mobilized in Marib in a show of force to demonstrate their ability to defend their home turf, should Houthis decide to enter the province. The Houthis have repeatedly vowed to take over Marib. They need to control the area in order to protect public facilities and to fight Al-Qaeda, the group claims. But tribesmen opposed to the Houthi advance believe that they are more interested in seizing Marib’s oil and natural gas fields, the source of most state revenue—a step that would strengthen the Houthi grip on power in Yemen.

Anti-Houthi tribes are using the only leverage they have to prevent the Houthis from entering their province: threatening to destroy the oil, gas and electricity infrastructure essential to Yemen’s ability to function. Yemen produces at least half of its oil in Marib and the main natural gas fields of the country are located in the province. So too are the power plants that provide much of the electricity for the country’s north, including the capital. “If Houthis attempt to fight us, we will take Yemen back to the 70s,” Ahmed Shulaif, a sheikh from Jahm, one of the five major tribes in Marib, warned in an interview.

The sheikh was not worried about the fallout from destroying the crucial infrastructure in his region and his fellow Maribis are unlikely to have many reservations either. Despite its natural riches, Marib is one of the most impoverished and underdeveloped areas in the Arab world’s poorest country. The province lacks basic infrastructure, including roads, running water, health, and education facilities. Maribis strongly believe they have been systematically marginalized for decades while revenues from oil and gas extraction in their areas go to the pockets of corrupt officials. “We have no electricity, no services, and our wealth has always gone to Sana’a and the rest of the country while we ate dirt. We have nothing to lose,” the sheikh added.

To prevent a catastrophe in Marib, political leaders and government officials have unsuccessfully attempted to broker an agreement between the Houthis and the tribes since last September. In early December 2014, a parliamentary committee negotiated a deal in which local authorities and local tribes agreed to assist the government in maintaining security by capturing militants and criminals, but the Houthis rejected the deal.

Tension continued to build as Houthis intensified their pressure on interim-President, Abdrabbo Mansour Hadi, eventually prompting him, Prime Minister Khalid Bahah, and his cabinet to resign en masse in late January. The Houthis’ intransigence and their claims that tribesmen were linked to Al-Qaeda militants—providing no distinction between the two—enraged Marib’s tribes. In a speech in early January, Abdulmalek al-Houthi, the leader of the rebel group, accused tribesmen in Marib of deliberately allowing the governorate to fall into the hands of Al-Qaeda.

“The Houthis have no business accusing us like that,” a youth activist from Abeeda, a tribe that controls the territory around most of the major oil fields in the province, said in an interview. “Tribesmen were killed trying to get rid of Al-Qaeda but we cannot do it without government support.” He pointed to an incident in which five tribesmen from the Aal Ma’ili sub-tribe were killed during clashes with Al-Qaeda elements from the same sub-tribe in September 2013.

Intense clashes between Houthis and local tribes supported by the Islah, the analogue of the Muslim Brotherhood in Yemen, took place in west Marib in the summer of 2014. The standoff ended when the Houthis redirected their attention to Sana’a. But with political uncertainty in the capital at an all-time high following the resignation Yemeni government, tribesmen from across the political spectrum in Marib have rallied around the perceived need to resist the Houthis. In mid-January, two traditionally rival political parties, General People’s Congress (GPC) and Islah, issued a statement accusing the Houthis of planning to “drag Marib into regional and sectarian conflict” and vowed to prevent Houthi militias from entering the governorate under any circumstances. Local tribes see the Houthis, who hail from Yemen’s northwestern border with Saudi Arabia, as outsiders—an armed group that seeks to establish political control and consign tribes into a subordinate status.

Tribal leaders in particular fear that Houthis will not only challenge their authority but also shame them publicly, robbing them of long-established status. Since they took control of Sana’a and other provinces in the northwest, the Houthis have used force against tribal leaders who opposed them. In November last year, armed Houthi men raided the houses of the governors of Marib and Aljawf (a province to the north of Marib) in Sana’a. A leaked video showed the leader of the once-powerful Hashed tribal confederation, Sadeq Alahmar, sitting helplessly on a chair as Houthis searched his home and arrested his cousin. The incident was widely condemned as an act of disrespect and an insult to tribal traditions.

“Hashed as a tribe was insulted. We are tribal leaders first before we are heads of political parties. What we saw from Houthi supporters and their militia is scary. They’ve insulted sheikhs like us in other places,” said Abdulwahed Numran, a sheikh from the Murad tribe, one of the five major tribes of Marib and the leader of the GPC who spearheaded the establishment of a rallying point against Houthis in the province.

But tribesmen are not the only ones resisting the Houthi power-grab. Immediately after the government resignation, the local authority in Marib declared complete autonomy until the dust settles in Sana’a. A statement published by the local authority condemned the events of January, which they called a “coup” against the president, describing Houthis’ recent advances as a “dark spot in Yemen’s history.” In a response to the Houthis’ unilateral decision to dissolve the parliament and announcement of a transitional authority, local and tribal leaders from Marib, Aljawf, and al-Beida, the three tribal provinces that form one of the six-region federations determined in early 2014, met and agreed to announce an independent region on February 11.

In Radaa, a tribal area just south of Marib, Houthis face a war of attrition. With the help of the Yemeni military and the apparently inadvertent aid of US-operated drones that targeted Al-Qaeda operatives, Houthis pushed Al-Qaeda from its stronghold and took control of the area in October last year. But their hold did not last long. Clashes between Houthis and local tribes broke out repeatedly since the Houthis entered the area, intensifying in the last month. More alarmingly, tribes previously opposed to Al-Qaeda have come to see them as natural allies in the fight against the Houthis. “For the first time in Yemen we see tribes embracing Al-Qaeda members,” UN envoy to Yemen Jamal Ben Omar said.

Although the conflict between Houthis and Yemen’s tribes stems from a struggle for power in Sana’a that has little to do with religious or ideological difference, the rivalry could evolve into a sectarian conflict. Local tribes opposed to the Houthis come from the Shafi’i school of Sunni Islam. Shafi’i have long resented Zaydis hegemony in northern Yemen—the Zaydis ruled North Yemen for over a thousand years and Zaydi families still control politics in the country. Al-Qaeda taps into anti-Houthi sentiment by presenting their campaign as an attack on Sunnis by rival Shia, a message that seems to resonate with local people. Over the past months, the rhetoric between both Houthis and tribes opposed to them has taken an increasingly sectarian tone.

It is unclear how the situation will evolve in Marib, but the tribes have readied themselves to mount a strong defense to repel any Houthi advance. Reports indicate that tribes are receiving assistance from Saudi Arabia, which is appalled by the Houthis’ rise. The Houthis, emboldened by a string of recent successes, might well be tempted to continue with their expansion now that they are in control of much of the government’s armories. But as Charles Schmitz, a scholar of the Middle East institute, argues, the Houthis “might win the initial battle but they will lose the war and there will be a lot of bloodshed in Yemen.” Yemen might become a new field for a proxy war between Iran and Saudi Arabia. But more worryingly there will be vast ungoverned spaces where the tribes and Al-Qaeda have a common enemy.

Image: An anti-Houthi protester shouts slogans as he holds a Yemeni flag on which the words, "Neither death nor humiliation" have been written, during a demonstration in the southwestern city of Taiz February 9, 2015. REUTERS/Mohamed al-Sayaghi