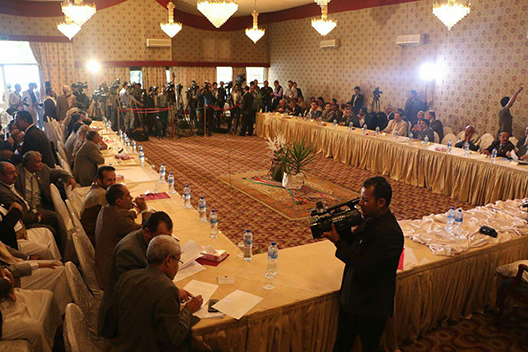 As the Yemen peace talks went on hiatus on August 6, the Houthi-Saleh alliance moved to convene a newly formed governing council in the capital Sanaa. As they did so, forces loyal to internationally recognized President Abd Rabbou Mansour al-Hadi tried again to take Sanaa militarily. The Houthi and Saleh camps experienced tense moments during the last round of talks, with Ali Abdallah Saleh complaining that the Houthis were acting unilaterally and not collaborating with (General People’s Congress) GPC leaders. But their cooperation in announcing and convening a new assembly suggests that those differences have been put aside.

Last week the alliance released the names of those who would fill the ten seats on the new Supreme Political Council, divided between high-level Houthi and pro-Saleh figures. The president of the council will rotate between members associated with Houthi and Saleh camps, suggesting an effort to move toward a power-sharing relationship that could outlast the current war. The new assembly also replaces the Houthi-led Supreme Revolutionary Council, which has been formally abolished.  The SRC, led by Mohammad Ali al-Houthi, was established on February 6, 2015 and had de facto served as the Sanaa-based government of the Houthis since then. The new assembly is tasked with managing Yemen’s political, economic, security, and military affairs. The original statement announcing its formation, released on July 28 during a public signing ceremony, emphasizes that the new assembly was also formed in accordance with the constitution. Some prominent northern tribal leaders have expressed support for the GPC-Houthi initiative.

While international actors have recognized Hadi as the leader of Yemen’s legitimate government, the country still does have a parliament. Elected in 2003, it had not convened since the 2011 revolution that forced the resignation of Saleh. Some of those MPs are now exiled and 26 have since died. Hadi has never sought to convene or consult Yemen’s parliament. But on Saturday, 143 of the remaining MPs convened in Sanaa and voted unanimously to recognize the new assembly and task it with forming a new government. They argued that with 275 MPs still alive, 138 were needed to reach the fifty-percent quorum that would make the vote constitutional—a number they exceeded. Houthi leaders and Saleh have spoken of the assembly as the core of a legitimate and new government for Yemen.

Saleh’s pronounced visibility in recent weeks suggests that the seemingly temporary alliance between Saleh’s GPC and the Houthis may be more enduring than many supposed, and the new assembly formalizes that arrangement. While the ousted president was not named as a member of the new assembly, his prominence at press conferences and in speaking to the media suggests that he may be positioning himself for a return to power. If the Houthis support such a move, which they have not publicly stated, Saleh’s return could become a reality. Given Saleh’s greater experience over them with governance, the Houthis may be bargaining that they will fare better in the long term in alliance with Saleh than under a Hadi-dominated transitional assembly.

UN special envoy Ismail Ould Cheikh Ahmed condemned the move as unilateral and in violation of UN SC Resolution 2216, which calls for all parties to refrain from moves that might jeopardize progress in the peace process. The Sanaa Center for Strategic Studies, an independent policy center based in Yemen’s capital, notes, however, that Hadi has also engaged in such unilateral moves, for example when he suddenly dismissed Prime Minister and Vice President Khaled Bahah in April.

After the initial announcement of the assembly’s creation in late July, the Hadi delegation temporarily withdrew from the talks in protest, which they viewed as an attempt by Saleh to retake the government. They were coaxed back to the table but Hadi condemned any attempt to revive the parliament as an effort to lend an air of legitimacy to the coup against his legitimate presidency. When the list of assembly members was announced last week, Foreign Minister Abd al-Malik Mekhlafi also described the formation of the assembly as yet another coup by the Houthis against the legitimate government. Former PM and VP Bahah, who has been openly critical of Hadi since his unceremonious dismissal in April, also described the move as a coup, but for the first time also called publically for southern secession.

Critics of Hadi—including members of the Southern Hirak movement and others not aligned with the Houthis or Saleh—have been consistently critical of his claims to legitimacy by pointing out that he was elected by referendum in a one-man context. Even more, they emphasize, his two-year term expired in early 2014.

The Houthis and Saleh are seeking to attract others allied with Hadi who might switch sides. They have called on members of the Islamist al-Islah party to join the new assembly. Islah leaders have a long history of both cooperation and antagonisms with Saleh, but they have largely fought on the side of Hadi during the current conflict. Efforts to entice them back into Saleh’s camp reflect an attempt to chip away at Hadi’s own coalition. If the past seven years are any indication, switching sides in Yemeni politics is not uncommon.

The Saudi Council of Ministers opposed the assembly as an obstacle to the peace talks.

But the kingdom’s recent $1.2 billion purchase 153 Abrams tanks, 20 of which are “battle damage replacements,” suggests that it intends to pursue a military victory even while voicing support for the peace talks.

UN special envoy to Yemen Ismail Ould Cheikh Ahmed announced August 6 that the Yemen peace talks in Kuwait would take a “month-long pause” but would resume within a month, likely in a new location. The talks accomplished little save continuing to talk, but that accomplishment is critical.

The main sticking point continues to be timing: whether the Houthi-Saleh coalition should withdraw from major urban areas, including Sanaa, and disarm prior to the formation of a new national unity government, as demanded in UN Security Council Resolution 2216 passed more than a year ago, in April 2015. Representatives of Hadi’s coalition refuse to discuss transitional arrangements of withdrawal and disarmament, while the Houthis demand that a transition process begins first.

The creation of the new assembly and its endorsement by a quorum of elected parliamentarians is a provocation to Hadi and his supporters. Indeed, Yemenis now have two governments: one internationally recognized but with little local support and a president in exile, and a second one based in Sanaa and endorsed by a majority of the living MPs. The Yemeni people desperately need an end to the war, with an inclusive transition process. But Hadi’s insistence on dominating the transition process and the Houthi-Saleh move to establish a new government both work only to maintain and even expand the deep divisions in Yemeni society at the heart of the problem.

Image: Photo: The announcement of the Supreme Political Council in Sanaa, Yemen.