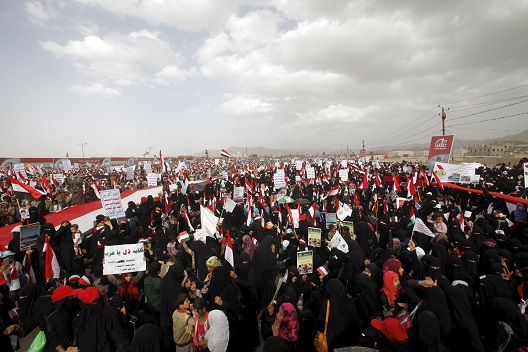 Tens of thousands of Yemenis took to the streets in Sanaa on Sautrday to express their resounding opposition to the Saudi-led war. Organized on the first anniversary of the start of the Saudi air campaign, the massive turnout represented a rebuke of the Saudi intervention, which has led to more than 6,000 deaths, pushed the population to the brink of a famine, created a humanitarian disaster affecting 80 percent of the country, and destroyed much of the country’s already weak infrastructure. Hundreds of images and videos of crowds circulated on Twitter, Facebook, and YouTube. The mood was one of joy and pride as Yemenis once again joined their fellow nationals in the streets to express their rejection of the political situation. Protesters clearly portrayed anti-Saudi sentiment on banners and in chants, but the sense of national unity resonated most as crowds broke into the national anthem throughout the day.

Unsurprisingly, virtually all parties to the conflict—save for Al-Qaeda in the Arab Peninsula (AQAP) and the Islamic State in Yemen—claimed the large crowds as evidence of their popular support. Even Gulf voices got into the act: The Gulf Today—the UAE-based English daily—claimed that the crowds supported Saudi efforts to restore president Hadi to power. Editors quickly removed the story from the paper’s website, but a screenshot captured a tweet by the paper included an edited image that seemed to have removed pro-Saleh banners via Photoshop.

Two separate demonstrations were planned in Sana’a to mark the anniversary: one in the morning organized by the General People’s Congress (GPC) and a second led by the Houthis in the afternoon. The GPC demonstration centered on Sabaeen Square, with photos of former president Ali Abdullah Saleh appearing on banners and placards, suggesting a number of pro-Saleh supporters present. As Saudi-coalition jets soared overhead, Saleh addressed the crowd with his usual confidence and arrogance, calling to Saudi Arabia to join in restoring peace to Yemen without the aid of the United Nations, which he described as hopeless. His overall message seemed directed at both the Saudis and the Houthis: that he is still in Yemen, he is not going anywhere, and he has retained a significant base of support.

In the afternoon, people and trucks streamed into the Rawda neighborhood for the Houthi-sponsored demonstration. Many carried placards with familiar Houthi slogans. A large women’s section was nearly packed, and like the morning event, the mood of the demonstration was overwhelmingly anti-Saudi and one of Yemeni unity and pride. The entire day was marked by ubiquitous Yemeni flags, some on banners hundreds of feet in length, others hand-drawn on protesters’ cheeks. Billboards and banners of various Arab leaders who had not joined the Saudi-led coalition could also be seen throughout the city.

Among Yemenis in Sana’a, tensions between Houthi and Saleh supporters have been increasing for some time. The Houthi-Saleh alliance has been on the rocks in recent weeks as ongoing talks between the Houthis and Saudis resulted in the announcement of a ceasefire, a prisoner swap, and relative calm along the Saudi border, even as intense bombing in Taiz and Sanaa continue. The prominence of Saleh’s image on placards and banners appeared calculated to signal to both the Saudis and the Houthis that they should not be so naïve as to envision a post-war peace that excludes him. While Saudi has focused its attention on defeating the Houthis, it has allowed AQAP to control large swaths of the Hadramawt and Mukalla. Now that Saleh is more actively asserting himself, Saudi has accused him of allying with AQAP. No firm evidence corroborates that claim, but Saleh has allied with jihadists in the past and might well do it again for political purposes.

Meanwhile, the Saudis-Houthi talks have produced not only the impending ceasefire, but prisoner swaps most recently in Ibb overseen by a number of tribal leaders. The peace talks are set to begin April 18, one week after the April 10 ceasefire is to take effect.

Saudi Arabia continues to feel pressure from human rights groups but seems intent on staying the course. Despite President Barack Obama’s scolding of the kingdom for its human rights abuses and its unwillingness to “share” the Middle East with Iran, US-Saudi relations remain strong. But open criticism of Obama inside the kingdom has significantly increased and he will likely feel that sentiment when he visits the kingdom next month on a trip that has been in the planning for months.

Even as Saudi’s airstrikes continue to devastate the country, Saturday’s demonstrations provided Yemenis with a much-needed lift to their spirits. Saleh and the Houthis may claim the large crowds as evidence for their popular support, but the mood was of national pride and condemnation of the Saudi campaign dominated. As Saudi Arabia asserts the laughable claim that its Hadi-allied forces control 95 percent of Yemen, only meager crowds turned out in Aden on Sunday for its own event commemorating the start of the war. Not lost on anyone was the fact that Hadi gave his speech commemorating the anniversary of the launch of “Operation Decisive Storm” from outside of Yemen.