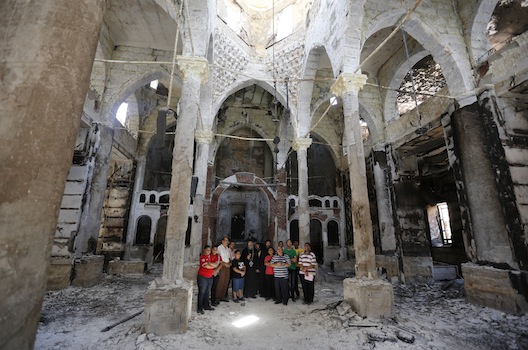 The nuanced, complicated-nature, and symbolic defeat of a theological state that came with June 30 has left most Christians in Egypt ironically and dangerously excited, hopeful, and confident in the current government and more precisely, Field Marshal Abdel Fattah al-Sisi.

Seven months ago, on August 14, Egyptian Christians fell victim to an unusually coordinated and well-executed attack that extended to almost every province of the country. As Christians watched approximately 100 Christian institutions and churches destroyed and attacked by assailants across the country, they also saw the strength of Egypt’s security apparatus as it dispersed the pro-Mohamed Morsi Raba’a al-Adaweya and Nahda Square sit-ins. While authorities accused the Brotherhood of planning and launching the attacks in retaliation for the sit-in dispersals, the Brotherhood in turn denounced the attacks, accusing Egyptian security forces of orchestrating them as a means of framing the organization. Regardless, August 14 both solidified Christian fear of the Brotherhood and hope that the Egyptian military would deliver them from this fear. Following the attacks, the military promised to rebuild at least some of the churches, leading to even greater popularity and support for Sisi and the military institution.

For some members of Egyptian society, this blind hope is a dangerous game to play, and certainly a strange one, after the military and police’s failure to protect Christians, whether under Mubarak, or the consecutive governments that have followed. Close observers remember Egyptian police firing tear gas into the Saint Mark’s Coptic Orthodox Cathedral after a mob attack on the church lasted hours, leading to one death and eighty-four injuries. Others may remember how up to twenty-six Christians were killed as military tanks ran them over at Maspero in October 2011 as they protested the destruction of a church in Aswan. In March 2011, less than three months after the revolution, up to five churches were attacked and burned in Imbaba. Sectarian attacks under Mubarak were common throughout his three decade rule;

Few will forget the bomb that ripped through Saint Mark’s Coptic Cathedral in Alexandria in January 2011. While Habib al-Adly, then Minister of Interior, was later tried for potentially orchestrating the attack, the case has yet to be resolved.

Revisiting the treatment of Christians over the years begs the question of whether Egypt has actually entered a new era of protection and concern for the community or, if Christians are being used as a political tool. More specifically, the question is whether society could have changed so drastically and quickly that Christians are now in safe hands and enjoy equal opportunities as citizens of the country. Reality leads observers to believe that while there may be a genuine focus on Christians at the present, it is part of a larger political scheme, the very same scheme that demonized the Brotherhood and may very-well backfire in the delicate social and political environment that Egypt now finds itself in. There is no better way to appear democratic than to embrace the largest Christian population in the Middle East. The question remains how long this phase will last.

Despite the hesitation with which we approach this question, the reality is that there are a couple of semi-positive signs. Most importantly, in addition to ordering the reconstruction of at least some of the churches attacked in mid-August, construction by the Ministry of Defense and Armed Forces actually began in December, marking the first of three phases. Despite potential conflict and obstacles that may appear in the near future, the fact is that the military is seemingly taking their reconstruction promise seriously. Secondly, Egypt’s new Constitution embraces higher inclusivity and protection of the rights of minorities, at least on the superficial level. While the rights of cultural and religious minorities are enshrined in the document, one would have to ignore the violations against journalists, civilians, and members of the Muslim Brotherhood, to conclude that the government, military, and police are suddenly eager to respect human rights.

Ultimately, however, there continues to be an unfortunate number of attacks on Christians in Upper Egypt and other areas around the country. As recently as March 5, a man was attacked in his home in Delga, Minya, after refusing to hand over his land to extremists. In early February, a woman was attacked and killed in her pharmacy and two others stabbed by at least one man shouting sectarian rhetoric. Ishak Ibrahim, a researcher with the Egyptian Initiative for Personal Rights (EIPR), recently published a lengthy article discussing the increasing number of kidnappings, forced evictions, and ‘jizya’ (taxes/royalties to local Muslims) that Christians are being forced to pay in Upper Egypt. Not only are the perpetrators met with impunity, but often the incidents go unreported all together.

If these more recent events are not enough to raise concern for the security and safety of Christians inside Egypt, the slow response to the violent attacks on Egyptian Christians in Libya also merits consideration. In less than a week, several attacks on Egyptian Copts have left over seven men dead and at least one injured; dozens tortured in Libyan prisons; and many fleeing Libya for their lives. One Egyptian Copt, Salama Fawzy Tobia, was shot in his vegetable store in Benghazi. He succumbed a week later to his wounds, becoming the eighth Christian killed in Libya. The Maspero Youth Union believes Christians are being targeted in Libya due to their religion.

The attacks come at a time when unconfirmed reports were revealed that Ansar al-Sharia had promised 10,000 dinars for the blood of Christians in Libya and multiple attempts by local Christians to contact the Egyptian Embassy for support have been met with no avail. Statements by members of the Foreign Ministry in response to these events appear to be no more than shallow promises meant to appease families of victims. After the seven-man execution, the Foreign Ministry announced that the attack was not aimed at just Christians, but all Egyptians in Libya, mentioning that the Egyptian Embassy (which had itself been attacked and had five members of its staff kidnapped in January 2014) was going to help track the investigation of the threats and killings.

Libya and Egypt, as signatories of the African Charter on Human and People’s Rights, are bound to the international human rights instrument that is meant to promote and protect human rights and basic freedoms in the continent. Article 2 of the Charter codifies the rights and freedoms of all humans, free from discrimination of religion; Article 4, the right of all humans to life and the integrity of her person; and Article 8, the freedom of conscience and the right to free practice of religion. Without going into depth on Libya’s internal conflicts and consequential violation of the Charter, the Egyptian government’s and military’s future statements should reflect the international obligations of both countries to protect Egyptian visitors and residents in Libya. Serious action should be taken to protect and assist Copts, whether in Egypt, Libya or elsewhere, and recognition of the unapologetic sectarianism should translate to renewed commitment to religious freedom both in the region and in Egypt.