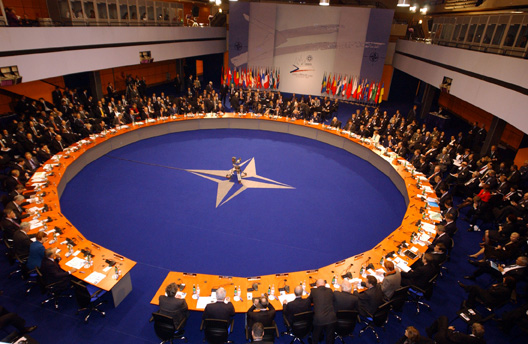 From Richard Weitz, World Politics Review:  The past year was an eventful one for NATO, but despite the success of the alliance’s intervention in Libya, persistent problems will continue to affect trans-Atlantic defense relations in the new year. The United States will need to redouble its efforts in 2012 to make progress, with the NATO Summit in Chicago this May providing an opportunity for high-level attention to the issue.

The alliance’s main problem is that European member states spend too little on defense. On average, their military expenditures have fallen almost 2 percent annually during the past decade, despite the continuing operations in Afghanistan. In the aggregate, since the end of the Cold War, defense spending by the European NATO countries has fallen by almost 20 percent, while their combined GDP has risen by around 55 percent.

Another problem is that the limited funds for European defense spending are allocated in such a way that they cannot meet European governments’ self-described global security requirements. Funds go overwhelmingly toward paying for personnel and operations and not toward developing or buying weapons. In 2009, more than half of European defense spending went to military personnel, while only one-fifth was used to procure equipment. These distributions will not soon change due to the rigidity of Europe’s military pay structures.

Furthermore, most European militaries still devote most spending for capabilities related to territorial defense, a legacy of their Cold War orientation, rather than for meeting global challenges. Of the 2 million European active duty forces, only 3-5 percent of them are readily deployable and sustainable at strategic distances from Europe in complex contingencies, such as stabilization, counterpiracy or peacekeeping missions. These kinds of deployments respond to emerging threats that directly affect Europeans’ interests, if not necessarily their national frontiers. NATO needs dynamic and flexible forces to address them rather than legacy forces that suck up funds but provide relatively little capability for a global security role.  . . .

Furthermore, the deep defense budget cuts adopted by many NATO members recently, on top of years of insufficient military spending, call into question whether the alliance can maintain and develop the expanding capabilities called for by the 2010 Strategic Concept, which lists a growing range of security challenges requiring an allied response.

NATO governments clearly recognize these problems and have tried to address them through collective policy initiatives that have demonstrated progress in certain areas. But many of their plans to reduce these gaps are uncoordinated and incompletely executed. Similarly, many of the recent cuts have been occurring with little coordination among member states. Some countries have announced reductions without even informing NATO allies in advance, let alone soliciting their views on their plans. The European governments have also been cutting assets without making much effort to preserve essential capabilities.

For all its shortcomings, the Libyan intervention demonstrated NATO’s continued relevance as a regional security provider. But in 2012, with the U.S. facing its own budgetary challenges, European NATO members must demonstrate their willingness to match that relevance with resources.