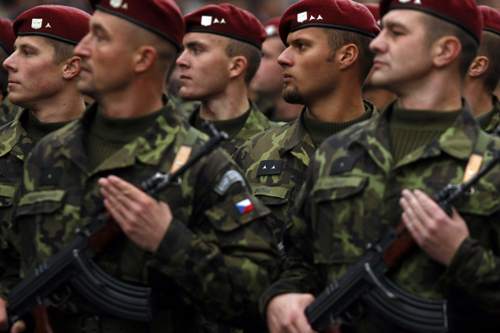 From CTK:  The Czech military is to lower the number of officers at its headquarters, including the General Staff, to slim down the commanding structure but the restructuring will not afflict combat units, Deputy Defence Minister Jiri Sedivy told CTK yesterday. . . .

The current Czech military is sized for the annual budget of some 55 billion crowns [$2.69 billion], but the military has only about 40 billion [$1.96 billion] for expenditures, Sedivy said.

"We are striving for the budget cuts to touch investments in the development of military capabilities as little as possible. We must make cuts elsewhere to gain money," Sedivy added.

The military must therefore lower expenditures on its buildings’ maintenance and operational costs, which is not a long-term solution, Sedivy indicated.

The Czech defence budget has been decreasing the most rapidly out of all NATO members over the past three years.

NATO recommends that its member states spend about 2 percent of their GDP on defence, which the Czech Republic is not fulfilling. It allocates about 1 percent of GDP to the military.

Defence Minister Alexandr Vondra warns that further cuts in the budget would undermine the joint defence principle to which NATO member states have pledged.

According to data from 2010, the defence sector has some 23,000 professional soldiers and about 9000 civilian employees.

The Defence Ministry will have a budget of some 42 billion crowns in 2013 compared with 43.5 billion this year.   (photo: Czech Position)