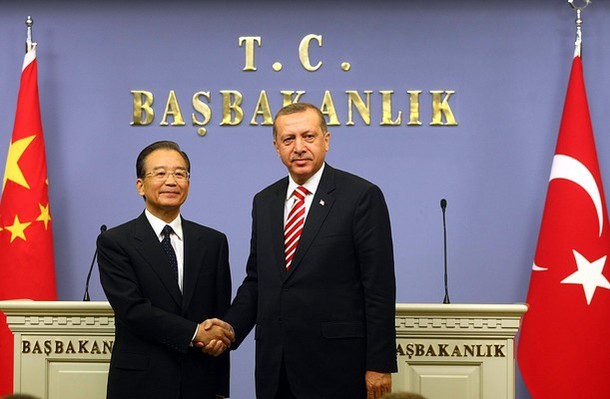 From Michael Auslin, the Wall Street Journal:  [T]he current downturn in relations is made even worse by Mr. [Turkey’s Prime Minister Recep Tayyip] Erdogan‘s decision to reach out to yet another authoritarian power, one that currently has a tense, if not troubled, relationship with the United States and many of its neighbors. That power is China. And after refusing to hold its traditional air force exercise with Israel, Ankara instead invited the Chinese Air Force to do the joint maneuvers at the Konya airbase in central Anatolia.

These recent moves by the Turkish government should worry anyone who believes that it is important for Turkey to maintain its close ties with liberal nations like the U.S. and Israel. What is the rationale for Prime Minister Erdogan reaching out to China and its president, Hu Jintao? Earlier this year, Messrs. Erdogan and Hu agreed to form a "strategic partnership," aimed largely at increasing the bilateral trade between their two countries. Currently, Sino-Turkish trade totals $17 billion, but the two leaders want to increase that figure to $50 billion by 2015 and $100 billion by 2020. Yet clearly, the Sino-Turkish relationship is likely to deepen beyond increased trade. Conducting air exercises with the Chinese Air Force is yet another sign that Mr. Erdogan is fundamentally altering Turkey’s foreign policy and security strategy, while possibly gaining influential Chinese support for cotinued pressure on Kurdish separatists.

As for Mr. Hu, increasing China’s influence in Turkey is a shrewd strategy. In particular, Sino-Turkish military exercises can only worry Washington and Turkey’s other NATO allies; how far will such activities go? Turkey is part of the consortium building the next generation F-35 Joint Strike Fighter, which will have to carry the burden of being America’s only front-line fighter aircraft in large numbers. Will Ankara invite PLA Air Force officials to watch F-35 testing and exercises once the Turkish Air Force gets the plane? Will PLA Air Force officers be allowed to test fly it? What other military sales might China make to Turkey in their enhanced relationship—ballistic missiles or advanced diesel submarines?

Mr. Auslin is director of Japan studies at the American Enterprise Institute and a columnist for WSJ.com.  (photo: Getty)