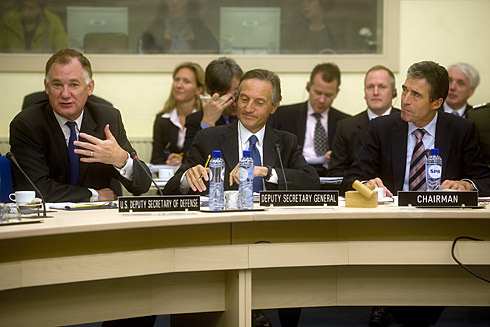 According to a press services report, Lynn held the discussion with NATO Secretary General Anders Fogh Rasmussen before delivering a briefing to the alliance’s North Atlantic Council on U.S. cyber initiatives. This came on the heels of NATO’s Military Committee discussion of their updated strategy.

The updated strategy addresses the new threats NATO faces — cyber attacks, missiles and terrorism. While the topic of cyber conflict was discussed in detail, no specific outcomes resulted nor were they expected. NATO has already stood-up their Cyber Incident Response Center and there are plans to bring it to full operational capability shortly. …

The warnings are out there, but the progress being made to defend against acts of cyber aggression is slow.  Many believe it will take what they call a “Cyber Pearl Harbor” before governments and their militaries step up to the critical task of defending their computers, networks and devices that make up the critical infrastructure.  (photo: Defense Tech)