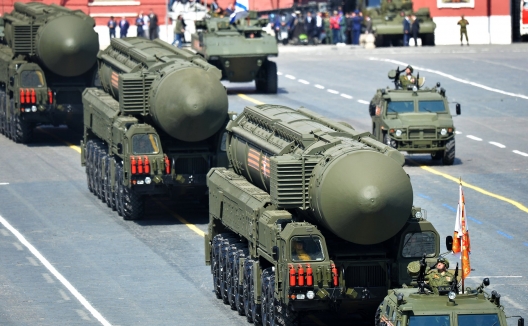 There is a growing chorus of political analysts, arms control experts, and government officials who are sounding the alarm, trying to call the world’s attention to its drift toward disaster. The prospect of a major war, even a nuclear war, in Europe has become thinkable, they warn, even plausible. …

Reasserting a Russian sphere of influence over Eastern Europe, he [Russian President Vladimir Putin] apparently believes, will finally give Russia security from the hostile West — and make Russia a great power once more.

Knowing his military is outmatched against the Americans, he is blurring the distinction between war and peace, deploying tactics that exist in, and thus widen, the gray between: militia violence, propaganda, cyberattacks, under a new rubric the Russian military sometimes calls “hybrid war.”

Unable to cross America’s red lines, Putin is doing his best to muddy them — and, to deter the Americans, muddying his own. Turning otherwise routine diplomatic and military incidents into games of high-stakes chicken favors Russia, he believes, as the West will ultimately yield to his superior will.

To solve the problem of Russia’s conventional military weakness, he has dramatically lowered the threshold for when he would use nuclear weapons, hoping to terrify the West such that it will bend to avoid conflict. In public speeches, over and over, he references those weapons and his willingness to use them. He has enshrined, in Russia’s official nuclear doctrine, a dangerous idea no Soviet leader ever adopted: that a nuclear war could be winnable….

Russia, hoping to compensate for its conventional military forces’ relative weakness, has dramatically relaxed its rules for using nuclear weapons. Whereas Soviet leaders saw their nuclear weapons as pure deterrents, something that existed precisely so they would never be used, Putin’s view appears to be radically different.Russia’s official nuclear doctrine calls on the country to launch a battlefield nuclear strike in case of a conventional war that could pose an existential threat. These are more than just words: Moscow has repeatedly signaled its willingness and preparations to use nuclear weapons even in a more limited war….

It was Andrei Piontkovsky, a Russian political analyst and frequent Kremlin critic, who first suggested the theory, last August, that Putin’s plan for the Baltics was more sophisticated, and more calculated, than anybody realized….

Putin hopes to spark a conflict in the Baltics, Piontkovsky wrote, so as to force Western European leaders into an impossible choice: Fulfill their NATO obligation to defend the Baltics and counterattack, even if it means fighting World War III over a tiny post-Soviet republic most Europeans couldn’t care less about — or do nothing.

The implications of doing nothing, Piontkovsky pointed out, would extend far beyond the Baltics. It would lay bare NATO’s mutual defense provision as a lie, effectively dissolving the military alliance, ending a quarter-century of Europe’s security unification under Western leadership, and leaving Eastern Europe once more vulnerable to Russian domination. In this way, Putin could do what Soviet leaders never came close to: defeat NATO.

“This is his most cherished objective,” Piontkovsky told me when we talked in his kitchen, in a leafy Moscow neighborhood across the river from Gorky Park. “It’s an enormous temptation. He may retreat at any stage, but the temptation is enormous, to destroy NATO. … The risk is big, yes? But the prize is enormous.”

“To destroy NATO, to demonstrate that Article V does not work, the Baltic republics of Estonia and Latvia are the best place for this,” he said. “It’s happening now, every day. Intrusions into the airspace, psychological pressure, the propaganda on TV.”

He suggested that Putin, rather than rolling Russian tanks across the border, would perhaps seed unmarked Russian special forces into, say, the Russian-majority city of Narva in Estonia, where they would organize localized violence or a phony independence referendum….

Such an intervention would force NATO into an impossible choice: Are you really going to open fire on some hoodlums stirring up trouble in Estonia, knowing they might actually be unmarked Russian troops? Would you risk the first major European war since 1945, all to eject some unmarked Russian troops from the Estonian town of Narva?

Putin, Piontkovsky believes, is gambling that the answer is no. That NATO would not intervene, thus effectively abandoning its commitment to defend its Eastern European member states.

Piontkovsky’s scenario, once considered extreme, is now widely seen by Western security experts and policymakers as plausible. At the end of 2014, the military intelligence service of Denmark, a member of NATO, issued a formal paper warning of precisely that:

Russia may attempt to test NATO’s cohesion by engaging in military intimidation of the Baltic countries, for instance with a threatening military build-up close to the borders of these countries and simultaneous attempts of political pressure, destabilization and possibly infiltration. Russia could launch such an intimidation campaign in connection with a serious crisis in the post-Soviet space or another international crisis in which Russia confronts the United States and NATO….

What would actually happen is something far murkier, and far more likely to leverage European hesitation: the playbook from Ukraine, where Russia deployed its newly developed concepts of postmodern “hybrid war,” designed to blur the distinction between war and not-war, to make it as difficult as possible to differentiate grassroots unrest or vigilante cyberattacks from Russian military aggression….

Russia can exploit this flaw by introducing low-level violence that more hawkish NATO members would consider grounds for war but that war-averse Western European states might not see that way. Disagreement among NATO’s member states would be guaranteed as they hesitated over where to declare a moment when Russia had crossed the line into war….

In such a scenario, it is disturbingly easy to imagine how NATO’s European member states could split over whether Russia had even crossed their red line for war, much less whether to respond. Under a fog of confusion and doubt, Russia could gradually escalate until a Ukraine-style conflict in the Baltics was foregone, until it had marched far across NATO’s red line, exposing that red line as meaningless….

Russia has been gradually lowering its bar for when it would use nuclear weapons, and in the process upending the decades-old logic of mutually assured destruction, adding tremendous nuclear danger to any conflict in Europe. The possibility that a limited or unintended skirmish could spiral into nuclear war is higher than ever.

Russia’s nuclear doctrine, a formal document the Kremlin publishes every few years outlining when it will and will not use nuclear weapons, declares that the Russian military can launch nuclear weapons not just in the case of a nuclear attack, but in case of a conventional military attack that poses an existential threat. In other words, if Russia believes that American tanks could be bound for the Kremlin, it has declared it may respond by dropping nuclear bombs….

A few months after he’d annexed Crimea, Putin revealed that during Russia’s undeclared invasion of the territory he had considered putting his country’s nuclear forces on alert; his government has signaled it would consider using nuclear force to defend Crimea from an attack, something Russian analysts told me was not just bluster….

[T]he Crimea revelation raises a disconcerting question: Where exactly does Moscow place the line for a threat severe enough to use nuclear weapons? Its doctrine says they should be used only against an existential threat, but an attack on Crimea would be far from existentially dangerous. We can only guess where the real red line lays, and hope not to cross it by mistake….

Russia’s answer, in the case of such a conflict, is to drop a single nuclear weapon — one from the family of smaller, battlefield-use nukes known as “tactical” weapons, rather than from the larger, city-destroying “strategic” nuclear weapons. The idea is that such a strike would signal Russia’s willingness to use nuclear weapons, and would force the enemy to immediately end the fight rather than risk further nuclear destruction.

Nikolai Sokov, a nuclear weapons expert and former official in the Russian Foreign Affairs Ministry, explained in the Bulletin of Atomic Scientists that this is not a far-fetched option of last resort; it has become central to Russian war planning.

“Such a threat is envisioned as deterring the United States and its allies from involvement in conflicts in which Russia has an important stake, and in this sense is essentially defensive,” Sokov wrote. “Yet, to be effective, such a threat also must be credible. To that end, all large-scale military exercises that Russia conducted beginning in 2000 featured simulations of limited nuclear strikes.”

[Evgeny] Buzhinsky, the recently retired member of Russia’s General Staff, confirmed in our meeting that this is something the military sees as a viable option. “If Russia is heavily attacked conventionally, yes, of course, as it’s written in the doctrine, there may be limited use of nonstrategic nuclear weapons,” he said. “To show intention, as a de-escalating factor….”

Russia sees itself as able to fight a war with the conventionally superior United States without losing, and that it can do this by using battlefield nuclear weapons. Under this doctrine, Moscow is deeming not only full-blown war against the US as imaginable, but a full-blown war with at least one nuclear detonation.That, perhaps, can help explain why Putin has seemed so willing to ratchet up the possibility of a real war with the United States, even one involving nuclear threats — he may believe that through his superior will and brinksmanship, he can avoid defeat. Adding a nuclear element to any conflict would also seem to increase the odds of NATO’s Western European members splitting over how to respond, particularly if Russian propaganda can make the circumstances leading up to the detonation unclear.

But this also shows the degree to which his entire strategy may rest in part on a shoddy premise — that “limited” nuclear war can be winnable — and one that puts the entire world at risk.

Image: Military parade to mark the 70th anniversary of Victory in World War II, May 9, 2015 (photo: Office of the President of Russia)