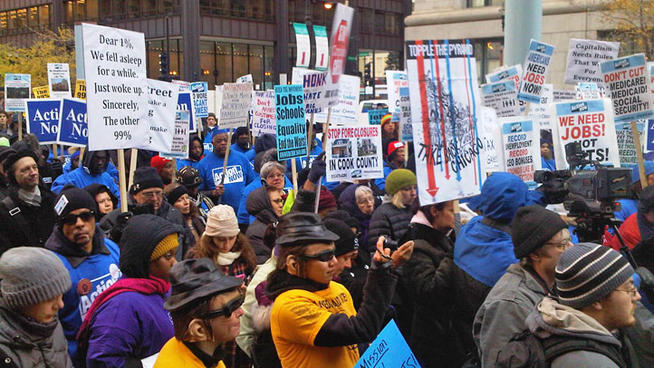 From Lisa Balde and Phil Rogers, NBC Chicago:  The activist group that helped initiate Occupy Wall Street is rallying troops for a "big bang in Chicago" ahead of the G8/NATO summits this May.

In a statement issued Thursday, Adbusters called on 50,000 people to descend on the city to "set up tents, kitchens, peaceful barricades" and join Occupy Chicago for a month leading up to the May 15-22 summits expected to draw 7,500 officials.

"With a bit of luck, we’ll pull off the biggest multinational occupation of a summit meeting the world has ever seen," the statement read.

"And this time around we’re not going to put up with the kind of police repression that happened  … nor will we abide by any phony restrictions the City of Chicago may want to impose on our first amendment rights. We’ll go there with our heads held high and assemble for a month-long people’s summit … we’ll march and chant and sing and shout and exercise our right to tell our elected representatives what we want … the constitution will be our guide.

And when the G8 and NATO meet behind closed doors on May 19, we’ll be ready with our demands: a Robin Hood Tax … a ban on high frequency ‘flash’ trading … a binding climate change accord … a three strikes and you’re out law for corporate criminals … an all out initiative for a nuclear-free Middle East … whatever we decide in our general assemblies and in our global internet brainstorm – we the people will set the agenda for the next few years and demand our leaders carry it out.

And if that doesn’t happen? Adbusters promises flash mobs in the streets, the shutdowns of campuses and corporate headquarters, and making "the price of doing business as usual too much to bear."

"We want to get within sight and sound of the G8 and NATO conference," said protest organizer Andy Thayer.  “If people can’t hear you, what good is the first amendment?”

It almost goes without saying that whatever happens, it will test the mettle, and restraint, of protesters and police alike.

“Certain people want to be arrested,” says Debra Kirby, the Chicago Police Department’s Chief of International Relations.  “When you violate the law, we will accommodate you.  You will be arrested.”