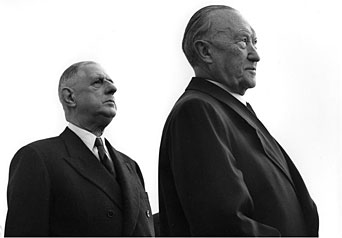 From Roger Cohen, the New York Times:  Only in recent weeks has the distance traveled come into focus: France, reintegrated in 2009 into the command structure of NATO , spearheading the United Nations-backed NATO military operation in Libya; providing armed muscle to the U.N. forces in Ivory Coast; and giving its pacifist-trending ally Germany a lesson in 21st-century Atlanticism.

Adenauer and de Gaulle must be turning in their graves. Here was Germany standing wobbly with Brazil, Russia, India and China — and against its closest allies, France and the United States — in the U.N. vote on Libyan military action. And here was France providing America’s most vigorous NATO support.

This was a dramatic inversion of postwar roles. It revealed the drift of a navel-gazing Germany unprepared to lead despite its power and impatient with Adenauer’s Western anchoring. It also demonstrated France’s break under [French President Nicolas] Sarkozy from the posturing Gaullist notion of a French “counterweight” to America. These are seismic European shifts. …

We stand at a high point in French postwar diplomacy and a nadir in German. There were strong arguments on either side of a Libyan intervention, but with a massacre looming in Benghazi, Germany had to stand with its allies. [German Chancellor] Angela Merkel has proved herself more a maneuverer than a leader. Germany often conveys the sense that it now resents the agents of its postwar rehabilitation — the European Union and NATO.

I don’t think Germany believes its future lies with the BRIC countries, as the U.N. Libya vote suggested. I do think Germany has entered a new era of ambivalence and nationalist calculation.

That means several things. European integration is on hold, and as long it’s on hold the future of the euro is at risk. The German-French alliance will remain under strain. Obama should look to Sarkozy, not Merkel, for strategic support.  (photo: Deutsches Bundesarchiv)